Wahibre-mery-Neith was a high Egyptian dignitary of the late 26th or early 27th dynasty (in the 5th century BC). 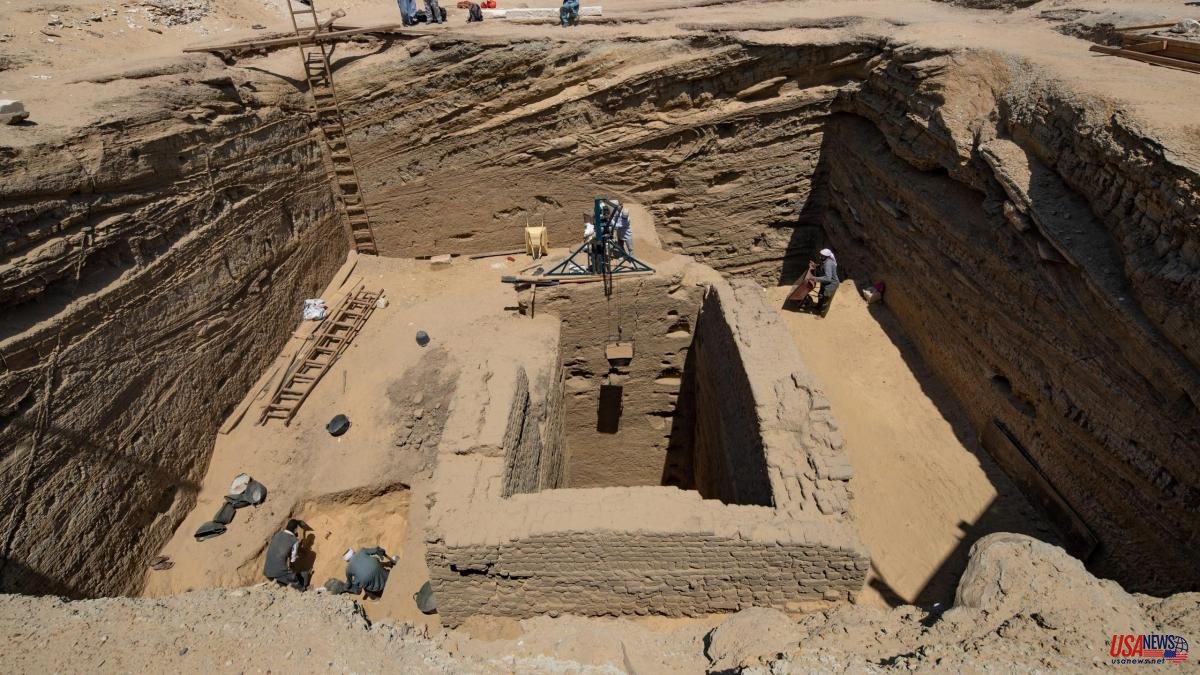 Wahibre-mery-Neith was a high Egyptian dignitary of the late 26th or early 27th dynasty (in the 5th century BC). Archaeologists from the Czech Institute of Egyptology have just discovered his tomb in Abusir, an Old Kingdom necropolis located on the west bank of the Nile River.

By itself, this fact does not arouse much interest. The grace of the story was on the walls of his tomb where, among many other titles, it was mentioned that he was "Commander of Foreign Mercenaries." Wahibre-mery-Neith supervised and directed thousand-battle-hardened soldiers from the Aegean Islands and Asia Minor during the first globalization of the ancient world.

Because globalization is not only instant communication with the other part of the globe, the transfer of knowledge or trade routes and global financial flows, but basically includes the movement of people from one side of the planet to another.

The Czech mission excavated in 2021 the largest embalming deposit ever found in Egypt, which belonged to Wahibre-mery-Neith. Inside there were more than 370 ceramic jars containing materials that had originally been used during the mummification of the dignitary.

During the spring of this year, archaeologists explored the tomb and its huge main shaft (measuring approximately 14 by 14 meters). At a depth of about 6 meters below ground level, the main shaft divided into several parts, separated by "bridges" made from the original bedrock.

Approximately in the center of the main shaft, another smaller space used for burial was cut out of the rock. It was oriented from east to west and measured approximately 6.5 by 3.3 meters. "The layout of this site is unparalleled in ancient Egypt, although it resembles the structure of the nearby tomb of Udjahorresnet and the so-called Campbell's Tomb at Giza," the researchers say.

At the bottom of the central burial shaft, at a depth of about 16 meters, a double sarcophagus was discovered, partially damaged by ancient looters. This find demonstrated that, unlike the embalming deposit, the Wahibre-mery-Neith tomb was looted in late antiquity, most likely around the 4th-5th century AD, as evidenced by two forgotten ancient Coptic vessels at the site. .

Wahibre-mery-Neith's outer sarcophagus was made of two huge blocks of white limestone. In a depression inside the coffin, an inner anthropoid niche was embedded. It was made of basalt and inscribed with the 72nd chapter of the Book of the Dead which describes the resurrection of the deceased and his departure to the afterlife.

This anthropoid tomb measured 2.30 meters long and 1.98 meters wide. Ancient looters made an opening in the outer western part and also broke the facial part of the inner lid into pieces, which archaeologists found around the sarcophagus.

The double sepulcher was situated directly on a sand fill at the bottom of the burial pit. On the west and east sides of the sarcophagus, quite a few funerary equipment was originally placed: two wooden boxes with a total of 402 earthenware shabtis (figures of servants who had to perform work instead of the owner in the afterlife), two vases uninscribed alabaster canopies, a table offering, ten cups, and a limestone ostracon inscribed with religious texts in black ink and hieratic script.

Due to limited space, the author of the text decided to cover the ostracon with short excerpts from the spells of the Book of the Dead that were also part of the transfiguration ritual and thus guaranteed a quiet existence in the afterlife of the owner.

The space inside the basalt sarcophagus was found almost completely empty. There was only a finely carved but uninscribed heart beetle and an amulet in the form of a headrest. Most likely, experts say, Wahibre-mery-Neith died very unexpectedly, when her tomb and burial equipment were still unfinished.