The Taliban broke up this Thursday, shooting in the air, a concentration in front of the Iranian embassy in Kabul of Afghan women who came to support the Iranian protesters whose fight against the repression of women they say they share. 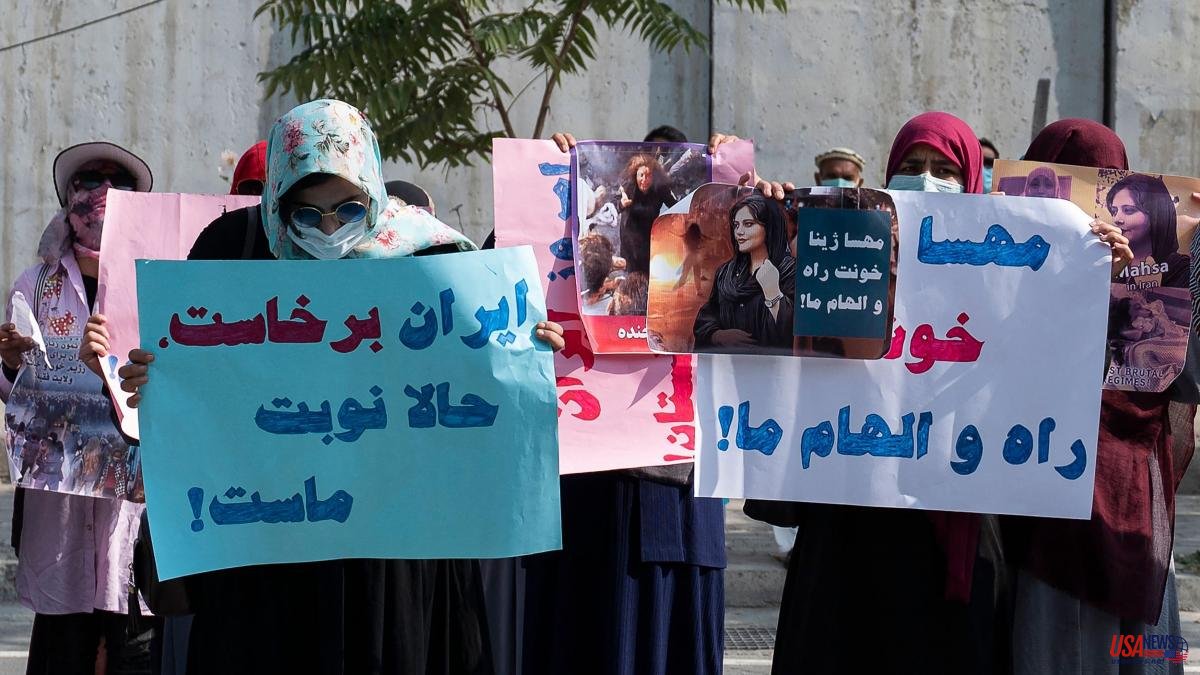 The Taliban broke up this Thursday, shooting in the air, a concentration in front of the Iranian embassy in Kabul of Afghan women who came to support the Iranian protesters whose fight against the repression of women they say they share.

Shouting "Woman, life, freedom", some 25 women, covered with headscarves, demonstrated for about fifteen minutes on the road in front of the Iranian embassy, ​​before being dispersed with shots fired into the air from the guns of the Taliban stationed in front of the building, reported France Presse journalists. The Taliban also tried to hit the protesters with rifle butts, according to the same source.

"Iran rises, now it's our turn", "From Kabul to Iran, say no to the dictatorship!" chanted the demonstrators, behind banners that the Taliban ripped from their hands.

The women, some of whom had hidden their faces behind sunglasses and surgical masks, gathered up the debris from their banners to crumple up paper balls and throw them at the Taliban in front of them. The security forces also ordered journalists to delete the images captured from the demonstration.

Demonstrations have been taking place every night in Iran since September 16, when young Mahsa Amini died in hospital, three days after she was arrested in Tehran by the morality police for violating a strict dress code in the Republic. Islamic Iran for women, who must cover their hair in public.

"We are here to show our support and solidarity with the Iranian people and the women victims of the Taliban in Afghanistan," said a protest organizer, speaking on condition of anonymity.

Since the return of the Taliban to power in August 2021, several sporadic demonstrations of women have been organized in the capital and other cities of the country, despite their ban, either against the loss of their jobs or to demand the right to work. Some of them were suppressed by force and the Taliban arrested the activists who had called the demonstrations.

After 20 years of war and the departure of the US army from Afghanistan, the new leaders of the country have imposed very strict rules on the conduct of women, especially in public life, such as the wearing of the full veil in public, preferably the burqa.

The feared Ministry for the Promotion of Virtue and the Prevention of Vice quickly replaced the Ministry of Women's Affairs and, in particular, ordered the separation of women and men in Kabul's public parks. Islamic fundamentalists have also closed secondary schools for girls in most provinces. On September 10, dozens of young people demonstrated in eastern Afghanistan, in Garde, after seeing the closure of their schools, which had reopened a week earlier under pressure from students and tribal leaders.

On Tuesday, a United Nations report denounced these "severe restrictions" on women's rights, in particular the ban on secondary education, and called on the Taliban to "immediately reverse this decision." Lifting restrictions on women's rights is a key condition for recognition of the Taliban government, the international community has insisted. So far, no country has recognized the Islamist government.