The 'Superman' who jumped in Qatar: "I had problems with the police, but Infantino came to help me"

It is one of the iconic images so far from the Qatar 2022 World Cup. 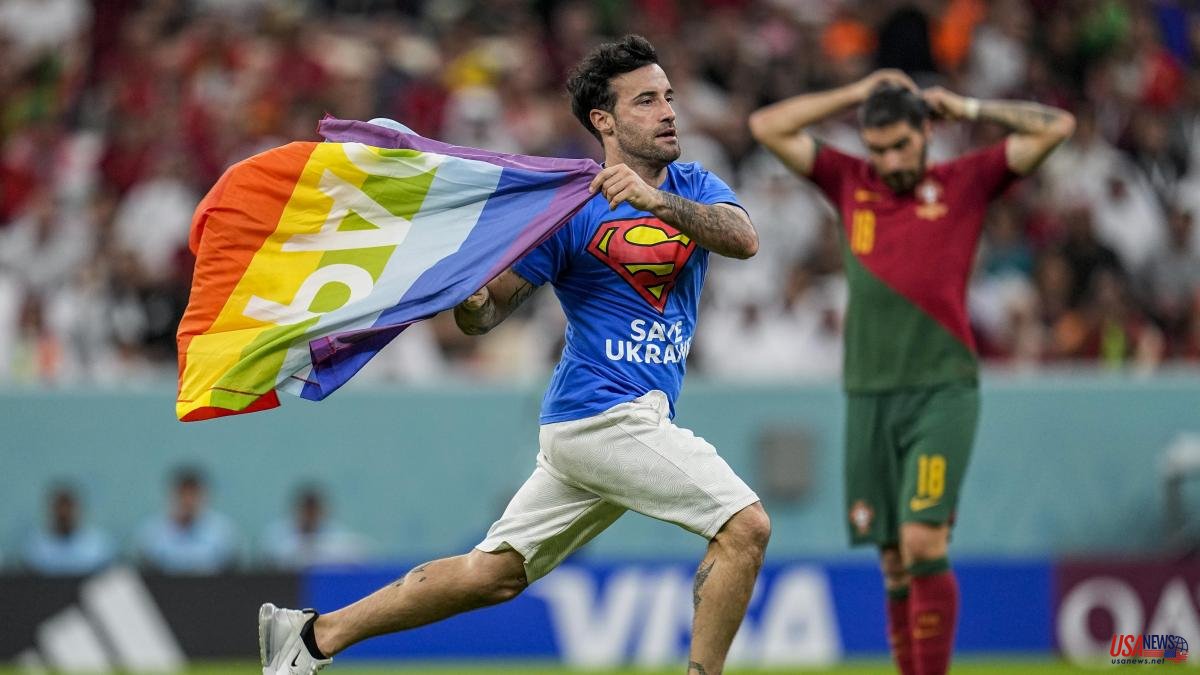 It is one of the iconic images so far from the Qatar 2022 World Cup. Mario Ferri, an Italian footballer known, above all, for his irruptions at large events with messages of social vindication, jumped onto the grass this Monday while Portugal was being played - Uruguay. He was waving a rainbow flag, the insignia of peace in Italy and very similar to the LGTBI, and he was wearing his usual T-shirt with the Superman logo and two messages: one in support of Ukraine and the other in solidarity with women in Iran. And when he was arrested by the security forces, the question that ran through all the spectators who were watching the game was the same: What will happen to him?

Ferri was arrested and taken to police stations, but he has not come to spend the night in the Doha cell, as he explained in an interview in El món to RAC1. He was helped by the president of FIFA, Gianni Infantino: "He personally came to help me, I had many problems with the police, but Infantino appeared and fixed the situation," said the spontaneous.

The FIFA president has been widely criticized in recent times, accused of giving up on Qatar's harsh demands beforehand to avoid messages of political or social vindication from the teams that are competing in a World Cup, already unorthodox in itself.

"FIFA does not consider my symbols to be violent, it was a message of peace," Ferri said. "I wanted to send a message to the world," he added, claiming his action in a country, Qatar, where homosexuality is prohibited by law and which is restricting any show of support for the LGTBI community: "They have been able to prevent the captains, but they have not been able to prevent the message of this Robin Hood", has completed

The spontaneous player has also detailed that he was released at 3:00 in the morning after being arrested when he jumped in the 51st minute of the Portugal-Uruguay match, already after 11:00 p.m. local time at the Lusail stadium.

Ferri had already tried to jump in two other matches of this World Cup, Spain - Germany this Sunday and, the day before, in France - Denmark. "He had already tried, it was the third time he had tried and this time I could: I got on the Portuguese bench and jumped from there", he told the RAC1 microphones.

At 35 years old, Ferri has a long resume of breaking into sporting events to show different types of protest messages. In fact, it is not the first or the second time that she jumps to the green in a World Cup. She already did it in 2010, in South Africa, in a match for Spain. Specifically, in the semifinals against Germany and with the motto "peace in the world".

Four years later, in 2014, in Brazil, Ferri repeated. He jumped in the round of 16 match between Belgium and the United States and, in his usual Superman shirt, he wore: "Save the children of the favelas." In addition, he has also jumped in Champions League finals –in 2011, with a Barça-Manchester United game at stake–, Club World Cup finals and other international team matches.

And beyond his symbolic gestures, this popular spontaneous Italian went to the border between Ukraine and Poland last March to help families fleeing the Russian invasion.

Ferri's fame, in this sense, has come to him more for his protest actions than for his football commitment. The last time he put on his boots was last summer for Tre Fiori in San Marino, with whom he played a minute of a Conference League match against Fola from Luxembourg. Before, this football globetrotter had gone through minor leagues such as India, the Seychelles or the United Arab Emirates.