The stage for Pogacar, the battle for Vingegaard

Dreams are made of an unbreakable, enduring and imperishable material. 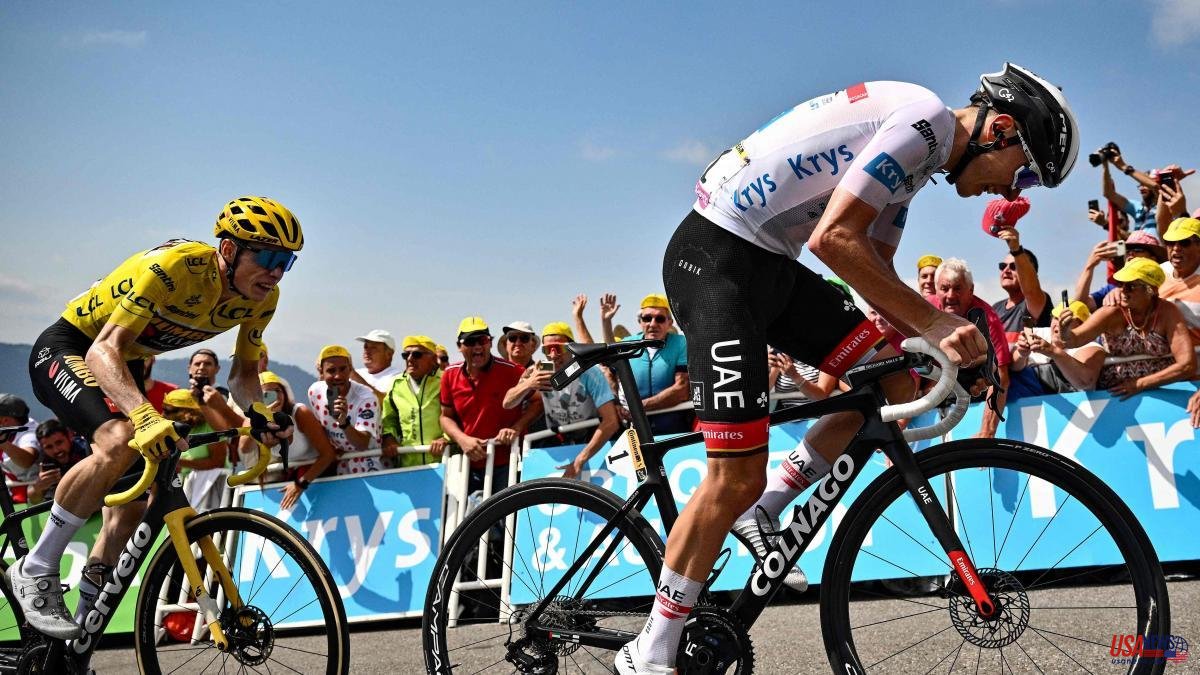 Dreams are made of an unbreakable, enduring and imperishable material. It is a strong and super resistant fabric. More or less of that product must be the rope that binds Vingegaard and Pogacar. Can't see it but there it is. It is imperceptible to the human eye but it exists. It is a flexible and indestructible strap that joins the saddle of the black Colnago bicycle with the number 1 of the handlebar of the leader's black and yellow Cervélo bike, the number 18 of the Tour. Linked by that cord, the two greats have become inseparable, a couple in fact. Tied together by that fictitious thread that seems real, the Dane and the Slovenian climbed four Pyrenees passes in the last 75 km of the stage. Up and down; ascend and descend; climb and let go; and go up. And nothing and no one could keep them away.

Not even the last ramp of the Peyragudes plateau, the last mountain, which reaches 16% and is long and endless. There they both came together, of course. To play for the stage victory in his particular duel. For a very steep sprint side by side. Pogacar was the first to start. The yellow jersey caught the wheel well and overtook him. However, the white jersey, as in La Superplanche, had saved one last cartridge. He sprinted again, danced on the bike and, with his heart at 200 beats, ended up imposing himself.

The stage, the third in the 2022 Tour, the ninth in his three participations (3 each year), went to Pogacar. But the third Tour is further away. The battle, as in Alpe d'Huez, Mende or Foix, was scored by Vingegaard. Only Hautacam stands between the Dane and the Champs Elysées in Paris. If he doesn't give in at all like this Wednesday, the yellow will be his. If the distance remains above the psychological barrier of two minutes, the Rocamadour time trial should not be a problem.

Yes, Pogacar has managed to crack those two minutes and 22 seconds that tormented and persecuted him. But with a great offensive from the whole team –the one that remains, which is not much, just three teammates, after the abandonment of Majka (injured in the breakdown in Mur de Péguére)- the only loot was the bonus. He could only subtract four seconds. A trifle. Insufficient to make a leader nervous or in trouble who endured undaunted when he was left alone with 24 km to go.

The UAE returned the Galibier move to Jumbo. They managed to isolate Vingegaard, who was left exposed, without gregarious, with no more shields than his legs, which are no small thing for what he goes to the mountains every day on this Tour. To the point that, as happened on Tuesday, there was no great attack from his rival on the last climb.

Going up the Aspin, the first port of the day, and while the Jumbo carries the weight of the peloton with Benoot followed by Van Aert and Kuss, with Vingegaard fourth in the row. But Pogacar is one of those who think big, one of those who play all or nothing. And at the Horquette d’Ancizan he decides to burn ships and orders the big Bjerg, perhaps the only Dane who does not go with Vingegaard and who lost almost 25 minutes the day before in Foix, to go up to the block. Bjerg did almost 30 kilometers commanding the group, mistreating the favorites, taking them with the hook.

The UAE tactic began to pay off on the first slopes of Val Louron, when Benoot, Laporte and Van Aert stayed.

For the first time, Pogacar was seen with numerical superiority thanks to an excellent McNulty who also took Kuss out of the point. Vingegaard was left alone, not even Geraint Thomas, the third in the Tour, who will complete the podium in Paris, could not follow them. But in that scenario, the Slovenian tried a single acceleration, under the banner of Val Louron. And the unbreakable rope did not break. On the contrary, he was firm. He didn't even flinch in the final sprint through the stage. “I have given everything. I knew that to win I had to do it like this: full throttle to the finish line”, defined the winner.

Although Pogacar trusts that this triumph will act as a butterfly effect. “We have four riders and the team has done an incredible job. We can all be proud. We couldn't do more. Tomorrow we will try. Today I couldn't be happier. I'm looking forward to it." It will be the last great battle.