It was a full-fledged diplomatic meeting. 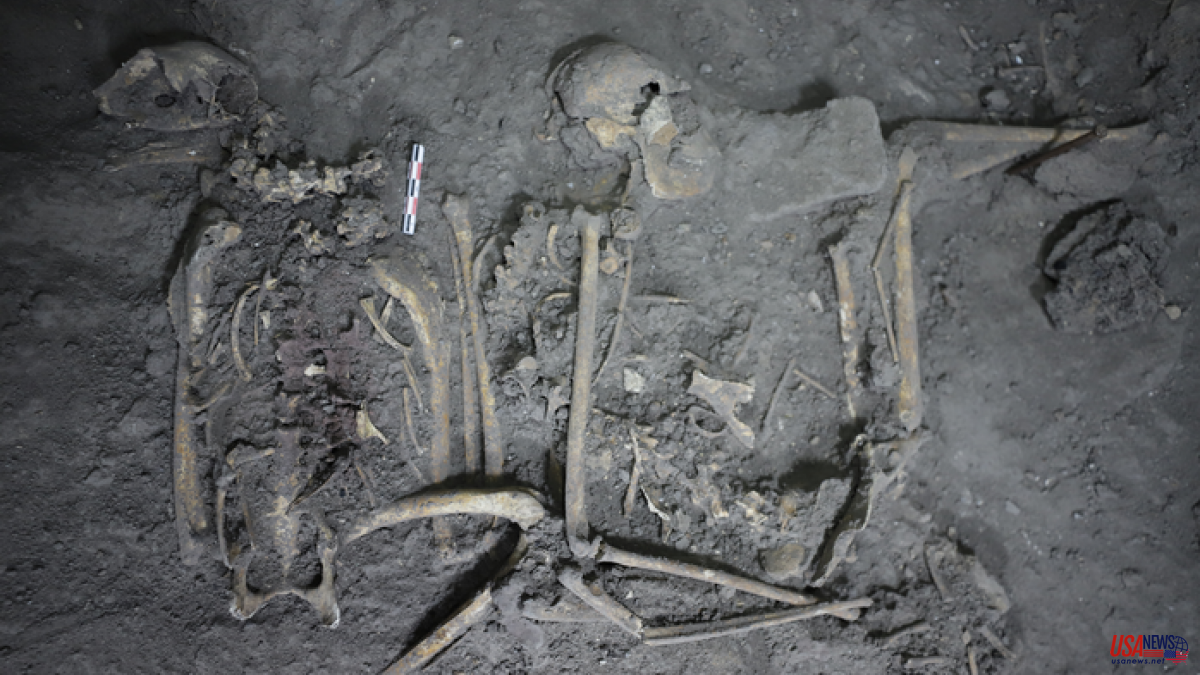 It was a full-fledged diplomatic meeting. The delegation of the Mayan Empire visited their neighbors in the great city of Teotihuacan (Mexico) to resolve a series of issues with their rulers. The meeting represented the fluid ties between these two great pre-Columbian powers.

The welcoming committee prepared a huge party that was held in the Plaza de las Columnas around 1,700 years ago. Both delegations delivered a multitude of gifts: Mayan-style murals for the Teotihuacans, more than 14,000 ceramic potsherds, and various exotic animals.

Among these beasts, a small spider monkey (Ateles) stands out, an arboreal species whose members measure between 60 and 90 centimeters long and that lives in groups of between six and 30 individuals spread throughout the tropical forests between Mexico and Brazil. This primate did not enjoy the celebration very much, since it was sacrificed during the festivities.

His complete skeletal remains have been found by archaeologists from the University of California, who have been excavating the site since 2015. As they explain in an article published in the Proceedings of the National Academy of Science (PNAS) magazine, this is the "evidence oldest of captivity, translocation and sociopolitical relations” between the Mayas and the Teotihuacanos.

"This finding and other evidence allows us to see the existence of high diplomacy between the two powers and discredits previous beliefs that the Mayan presence in Teotihuacán was restricted to immigrant communities," says Nawa Sugiyama, lead author of the study.

The Mesoamerican city - whose name means "the place where men become gods" - was such a great political, cultural, economic and religious center that it attracted people from all over. “It was a place where people went to exchange goods, property and ideas. It was a place of innovation,” adds Sugiyama.

“Finding this spider monkey –continues the American archaeologist- has allowed us to discover reassigned connections between Teotihuacanos and Mayan leaders. The primate brought this dynamic space to life, represented in wall art. It is exciting to reconstruct this living history.”

The animal, a female, was likely between five and eight years old at the time of her death. His remains were found along with a golden eagle and several rattlesnakes. All were surrounded by unique artifacts such as fine green stone figurines made of jade from Guatemala's Motagua Valley, abundant shell artifacts, and luxurious obsidian objects such as razors and projectile points.

"These findings (the monkey was tied) are consistent with the evidence of the symbolic sacrifice of live animals that participated in the rituals carried out on the altars of the Pyramids of the Moon and the Sun," the researchers state in the article.

The results of the examination of two teeth, the upper and lower canines, indicate that the Teotihuacán spider monkey ate mainly maize, arrowroot, and chili peppers. Bone chemistry also indicates that the animal was in captivity for at least two years. Before traveling to Mexico, it lived in a humid environment, feeding mainly on plants and roots.

In addition to studying ancient rituals, Sugiyama's find allows us to piece together broader narratives and understand how these powerful advanced societies dealt with social and political stressors that largely mirror the world today.

"This helps us understand the principles of diplomacy, see how urbanism developed... and how it failed," says the researcher. “Teotihuacán was a successful system for more than 500 years. Understanding the resilience of the past, we see that they are relevant in today's society. Because there are many similarities between then and now, ”she concludes.