In the first weeks of the Russian invasion of Ukraine, which will be 300 days tomorrow, President Volodimir Zelensky asked NATO for planes. 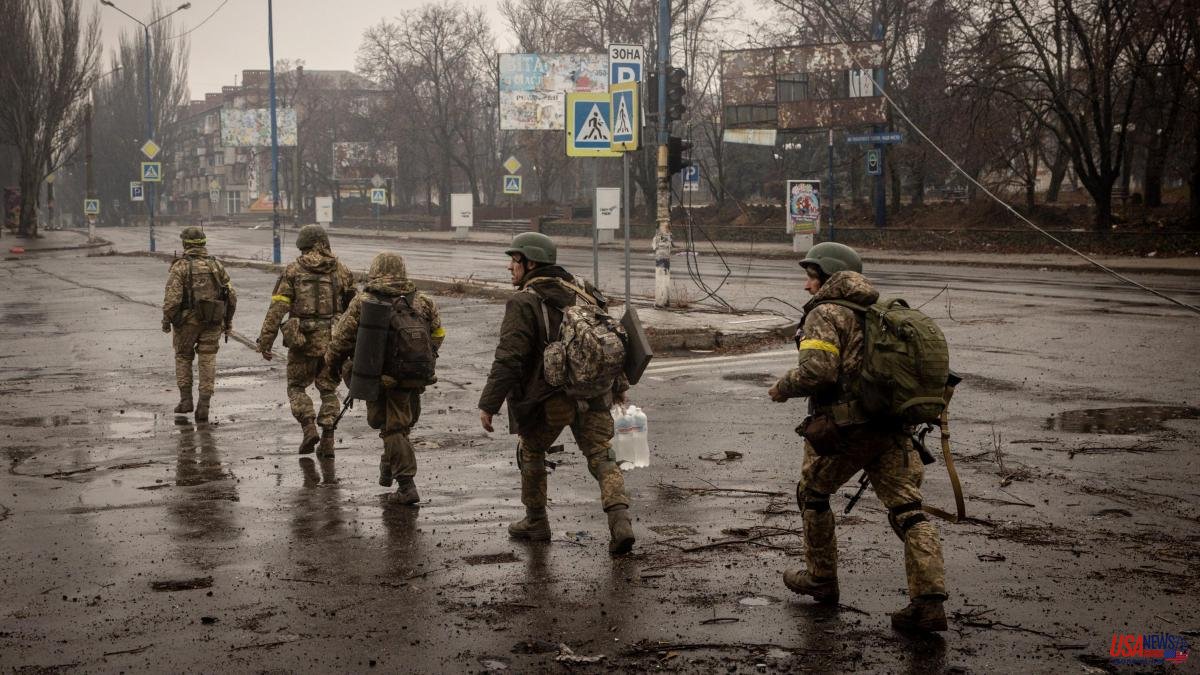 In the first weeks of the Russian invasion of Ukraine, which will be 300 days tomorrow, President Volodimir Zelensky asked NATO for planes. They were not given. Military aid remained in “defensive” weapons, meager portable anti-tank and anti-aircraft rockets, waiting to see what would happen. But, given the resistance capacity of the Ukrainians and the persistence of Moscow in its maximalist objectives, the Western position has gradually had to change and today it seems more than ever in the hands of what is decided in Kyiv.

Ukrainian and Western analysts agree on how the invaded country has successfully survived so far, despite the limitations of the aid it receives: better organization and use of resources, a powerful electronic warfare army, and high combat morale on the front lines. to an obsolete hierarchical structure and military doctrine on the Russian side, which also carries the burden of a troop that does not even have a complete notion of why it is where it is.

Whether or not the US assessment of some 100,000 casualties, between killed and wounded, on each side at the beginning of November is correct (ie, it was October data), the Russian and Ukrainian decision to press on is manifest. Neither Russia has a position of strength for a negotiation nor is Ukraine weak enough to want it. Everyone believes that the war will be long and, with winter already upon us, the reasoning that operations will slow down would not have to be true.

The Ukrainian forces have had four stellar moments in these ten months of war, while the Russians have had none after the March conquests except for their advance in July on Severodonetsk and Lisichansk, in northern Donbass.

In August, the Ukrainians were able to attack a major airbase and powder magazine in Crimea, forcing the evacuation of Russian vacationers. That was the first hit. In the second, in September, they faked an offensive in the south and actually advanced rapidly in the north to liberate the Kharkiv region (almost 6,000 square kilometers) and occupy the main logistics center of the Russians, who withdrew. The third coup, in October, had a symbolic content: an explosion that caused serious damage to the Kerch bridge, which connects Russia with Crimea. The fourth and most painful blow to Russia was the recapture of Kherson in November, forcing the Russians to entrench themselves on the other bank of the Dnieper River, this time in an orderly retreat. The Russian president had just proclaimed four occupied regions belonging to Russia, which he does not even fully control, one of them Kherson.

If in June the Ukrainians were short of ammunition, in July the first batteries of US Himars rocket launchers went into action. The range of this weapon has allowed them to attack the Russian rear, their supply routes, and break their logistics at various points. And also to balance quantity with quality, which is also a virtue of the French César howitzer. According to experts, the Russian artillery surpasses the Ukrainian in firepower, but in terms of precision, the opposite is true.

But what Ukrainians gain in efficiency, they lose due to the lack of sufficient batteries, which forces the ones they have to wear out and, therefore, to repairs that in many cases have to be done in Lithuania or Slovakia, as revealed by The Wall Street Journal, which takes time and reduces capacity on the front lines.

Russia's response has not been able to go beyond attacks on civilian targets, more against the energy infrastructure than directly on the population, in order to cause both industrial collapse and the maximum suffering of the civilian population (families of soldiers at the front) and a hypothetical new exodus of refugees. To do this, it has resorted to the combined use of Iranian kamikaze missiles and drones, which serve especially to saturate the anti-aircraft defense.

Finally, the announcement last week that the US will send the Patriot anti-aircraft system, which is said to be the most effective in the world, could put a stop to this campaign of destruction (which includes, by the way, hundreds of hospitals). , while from Washington it is affirmed that Moscow cannot cope with the production of missiles and ammunition.

If the Russian agency Sputnik gave us news about fabulous weapons for years – hypersonic missiles, invisible planes, supertanks…–, the reality has been to find, day in and day out, videos and messages on social networks of recruits sent to the front in terrible conditions. equipped, families protesting the levy and the negligence of the governors who administer it, soldiers confronting inept officers or shouting “pedophile” at a drunken general in chorus. This is a war that uses and abuses social media like never before. And, against all odds, it is the Russian military bloggers themselves who have publicized the failure of their troops.

The summary of all this is a pathetic image of the Russian army, especially after the mobilization of some 300,000 new soldiers and the prominence that the paramilitaries of the Wagner group have gained, which include men taken from prisons by their creator, Yevgueni Prigozhin. . In a most bizarre privatization of war, the Wagners lead a long, relentless onslaught, costing lives on both sides, on the town and crossroads of Bakhmut in the Donbass, either seeking a military victory ( for the benefit of Prigozhin in Moscow, in the first place) or to entertain the Ukrainian troops while the regular army is recomposed, who knows if for a new offensive this winter on which the possibility of leaving Belarus in the direction of Kyiv. At least that's what General Valeriy Zaluzhnyi, head of the Ukrainian armed forces, has said.

Inexplicably, the Russians seem intent on waging a conventional war on the ground: they neither achieved air superiority at the outset nor the country's computer blackout, nor have they destroyed the railway lines (foreign politicians visit Kyiv incessantly) nor, that You know, they have wiped out the Ukrainian war industry. Electronic warfare also appears to be another unexpected weakness on the Russian side, while Ukraine has had NATO help in this field since before the invasion.

General Zaluzhnyi himself was surprised, in an article published in September, at what is happening. “Despite a sufficient amount of widely available information, it is difficult for the modern generation, the world and Europeans, first of all, to imagine WWII-style combat operations. The contact line has thousands of kilometers, tens of thousands of units of military equipment, more than a million people who are directly or indirectly participating (...)”

General Zaluzhnyi gave in this article –available to everyone– many clues, beyond the propaganda-tinged news from the Ukrainian media and the daily speeches of the tireless President Zelenski. And what was valid three months ago is still valid today. Changing the situation "radically" implies "several consecutive and ideally simultaneous counterattacks" in 2023. For this, it is necessary to create "between ten and twenty" mechanized brigades, which represents dozens of tanks. And, of course, armored vehicles for the infantry, precision artillery, rocket launchers like the famous Himars, anti-aircraft missiles and lots of ammunition.

There are many needs. Zelensky has insisted in recent days that he wants tanks, pointing once again to Germany's reluctance –with all sorts of excuses– to send its modern Leopard 2, which by the way equip around twenty countries. The agility of friendly countries in arms deliveries will determine whether it is possible for Ukraine to launch an attack in the direction of the Azov Sea (Melitopol, Berdyansk...) that will split the occupied territory in two – Donbass on one side and Crimea on the other. another– and do it before the end of winter, the harder the better for the mobility of mechanized means.

If General Ben Hodges, former head of US forces in Europe, has said more than once that the Ukrainians will recapture Crimea by the summer – including September – of 2023, General Zaluzhnyi points out instead that even if this happens, the threat from the Russian side of the Black Sea would continue to exist, with "a new stage of confrontation".

The Ukrainian military chief places the enemy's “center of gravity” not in Crimea – which is the cornerstone of this war in strategic terms – but on Russian territory. It is about making the war felt in Russia itself to bring about real change. Hence the firing of missiles on the Belgorod, Kursk and Bryansk regions, and the recent – ​​and surprising – attacks, apparently with old recycled Soviet drones, on two airfields, one on the Volga and the other some 200 kilometers from Moscow. What Zaluzhnyi is proposing, or demanding, is that Ukraine have the military capabilities to threaten Russia, in the same way that Russian missiles are raining down on Ukraine from long range today.

No one can say that this approach is unreasonable. But the United States and the rest of the allies have feared, throughout this war, giving Ukraine the means to attack Russian territory, in the face of the specter of a fatal confrontation on a large scale. And it is now that Ukraine attacks Russia. Just when it becomes more evident, and this is what Moscow maintains, that NATO is waging war against Russia through third parties.