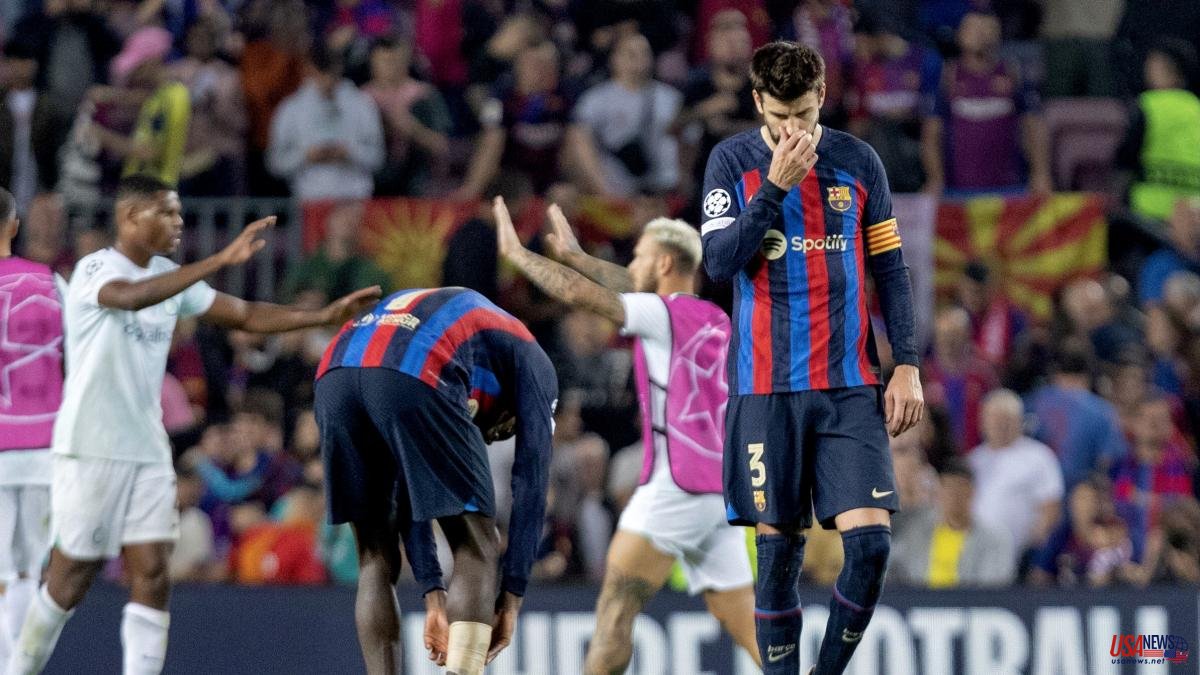 Concern within FC Barcelona. After the 153 million invested in the field, and the sale of various club assets with the so-called levers, it was expected that the virtuous circle, an expression that dates back to the first term of Joan Laporta and is based on the investment in sports squad is the one that will bring titles, illusion, reputation and of course economic growth, it would be a reality this season. Aspiring to win the League again and of course competing to reach at least the quarterfinals of the long-awaited Champions League, a trophy that Barcelona hasn't raised since 2015. Nothing could be further from the truth. This 2022 will not happen either after the triumph of Inter Milan against Viktoria Pilsen. The line between the virtuous and vicious circle is very fine and the pressure is maximum for a club that, with the immediate results, hoped to recover prestige, hierarchy, economic tranquility and, of course, enthusiasm.

Especially since the current economic revival is sustained by the sale of various club assets, the so-called levers. With the partner's permission, the board executed the sale of 25% of the television rights of the Men's League to Sixth Street and 49.9% of Barça Studios to Socios.Com and Orpheus Media. Both levers provided 867 million euros of income to the Blaugrana coffers. And the board, aware that ordinary business depends in part on sporting success, expected the team to do the rest.

This is demonstrated by the budget planned for this season, which contemplated reaching the quarterfinals of the Champions League for which he would enter at least 39.5 million euros and only taking into account the fixed amounts. It would be necessary to add to this amount the income by coefficient and the television rights.

Finally, Barcelona leaves the Champions League having entered 19.3 million which, in the best of cases, could be 22.1 million if they beat Viktoria Pilsen next week and 36.5 million if they win the Europa League. That is to say that not even with the 14.4 million that it means to win the second continental competition -last year it did not succeed- the budgeted objective would be reached.

But the reality is that Barcelona is leaving the top continental competition having entered only 19.3 million. 15.6 for being in the group stage and 3.7 for the victory against Pilsen and the draw at the Camp Nou against Inter Milan. In case of beating Bayern at the Camp Nou and emerging victorious from the Viktoria Pilsen field, he will be able to earn 5.6 million more. Conquering the Europa League would come close to the 39.5 million budgeted since winning the second continental competition means earning 39.3 million. Last year he didn't. And stopped entering 12 million.

To the list of tangible consequences we must add another of the fears of the board of directors: the response of the fans, who had responded very well to the call from the new Barça. In the 25 games that Barcelona played last year at home, they gathered an average of 55,026 attendees. This year, with the 92,302 spectators who attended Barça-Inter in the best entry of the season, the Blaugrana calculator exceeds the average of 83,564 fans. Against Bayern, 84,016 spectators attended.

There is some fear that this trend will decline with the fall to the Europa League. It is estimated that the difference in income between playing a round of 16 or a quarter-final of the Champions League to the Europa League is 1.5 million euros per game. Amount to which must be added another 2.5 million that are entered on match days for merchandising and visits to the Blaugrana museum. In total another six million that Barcelona stops entering.

The exile next season to Montjuïc doesn't help either. In itself, it will imply a lower attendance since the capacity of the Estadi Olímpic is 55,926 spectators. “A tsunami opens with the move to Montjuïc. It was essential for the viability and sustainability of the club, both at a sporting and economic level, to continue with the Champions League”, emphasizes financial expert Marc Ciria, founding partner and general manager at Diagonal Inversiones, A.V.

Beyond the tangible concepts related to the budget or box office receipts, there are other reputational concepts that directly affect agreements with sponsors. Barcelona has a high percentage of sponsors and others who remain on hold whose continuity depends on their presence in the top continental competition. “Barcelona must recover the story that the team is still under construction. That it has some values, with the Masia. With a young team that still has to grow but whose base is good. It is essential”, says Ciria.