Crossing the Atlantic alone today is considered a great feat, yes, but doing it in 1930, as a couple and with a seven-year-old daughter, made Enric Blanco enter the category of heroes of the moment, and when on October 5 of that year they arrived to Barcelona from Boston a multitude came out to the port to receive them. 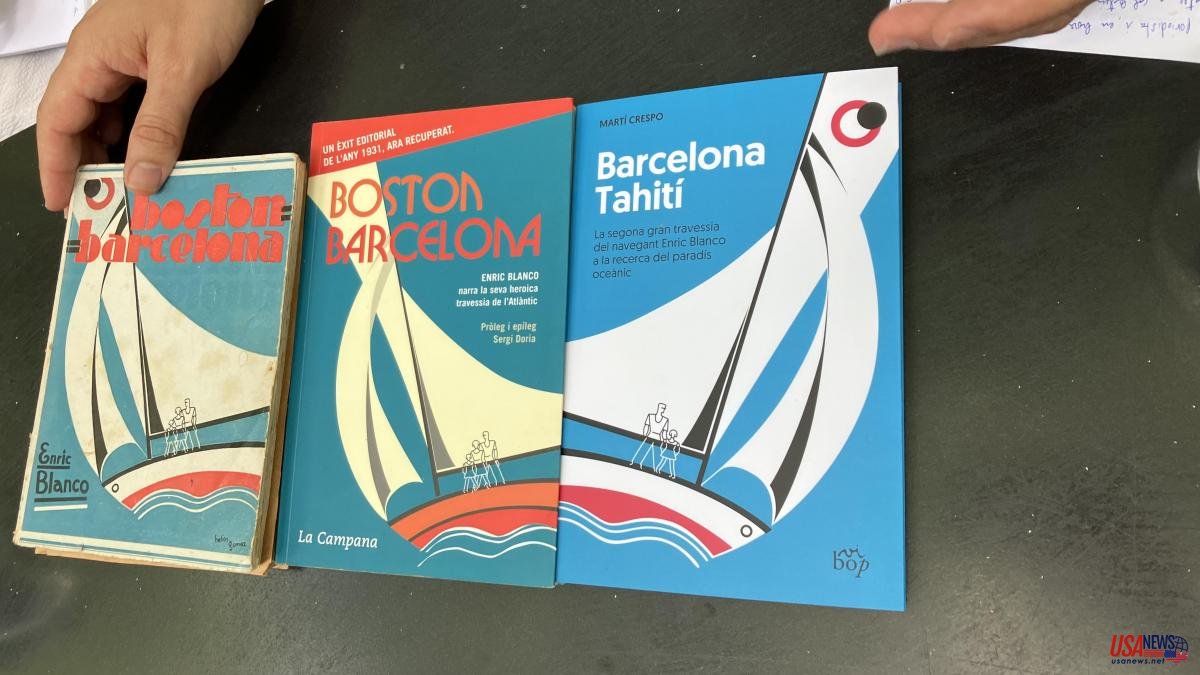 Crossing the Atlantic alone today is considered a great feat, yes, but doing it in 1930, as a couple and with a seven-year-old daughter, made Enric Blanco enter the category of heroes of the moment, and when on October 5 of that year they arrived to Barcelona from Boston a multitude came out to the port to receive them. He even received a congratulatory telegram from King Alfonso XIII. In La Vanguardia, the headline “Welcome, Professor Blanco!” opened the sports section. It was the time of feats such as those of the Spanish Plus Ultra –the seaplane that had flown from Europe to America in 1926–, the Spirit of Saint Louis –with which Charles Lindberg made the non-stop reverse journey the following year– or the Frenchman Alain Gerbault – who a few years earlier had already sailed the Atlantic alone with his Firecrest –.

Blanco himself explained his trip the following year in the book Boston-Barcelona, ​​which in 2006 the journalist Sergi Doria reissued in La Campana adding Blanco's stay in Barcelona for a few months. But what became of them afterwards? When did they lose track? The journalist Martí Crespo goes through it in Barcelona-Tahiti (Vibop), who gives us a summary of the previous incident and updates it to explain how that "hero who wanted to be an anti-hero" left Barcelona on the same sailboat on March 22, 1931 with an unknown course that ended in Tahiti. He was accompanied only by his daughter, Evaline Lucy (they called her Evalú, the name given to the ship), since his wife, the American Mary Rader, was admitted to a sanatorium in Barcelona for serious psychiatric problems.

Blanco's is a particular story. Son of Barceloneta, where he was born in 1890, he felt the call of the sea very early and embarked as a waiter on the Clotilde, a brig-schooner, and changed ships along the route to America until in 1910 he decided to go to New York . Established in the US, he enlisted in the army for a few years – and thus obtained US nationality. Still on the mainland, he studied and in the 1920s he began teaching Spanish first in high schools (in Arizona or New Mexico) and later in universities (Wisconsin, Ohio, Iowa). But he still had the sea between his eyebrows, and married with a daughter, after a few sailing lessons he left everything for the Evalú and undertook the trip to his hometown. All "as a liberation from the monotonous and insipid life of a teacher", as he himself wrote. Bearing in mind that Blanco barely had navigation skills or instruments, the feat is amplified.

In Barcelona they had been received as celebrities, but they did not adapt and a few days after arriving Rader was hospitalized for severe depression. For the next six months, Blanco writes the memoirs and gives lectures, but is disappointed because the promises received come to nothing. He announces navigation projects –including a trip around the world–, until he finally sets sail on March 22, 1931 with no known destination. Without Rader, he traveled with her daughter and a sailor, Ignasi Morató, who after a few weeks recanted and returned to Barcelona. Crespo reviews his journey and maintains in the book that he perhaps headed for Tahiti under the influence of the writer Aurora Betrana, who had lived there and with whom he had dined in Barcelona.

Papeete, the capital of the island, will finally be his last destination. There he was a teacher of Spanish and English and a tour guide, and he has been buried there since 1964. He had found his oceanic paradise.