The situation of chaos that exists in airports and airlines in half of Europe is testing the patience of thousands of passengers and, in many cases, embittering their vacations in the first summer without restrictions after the pandemic. 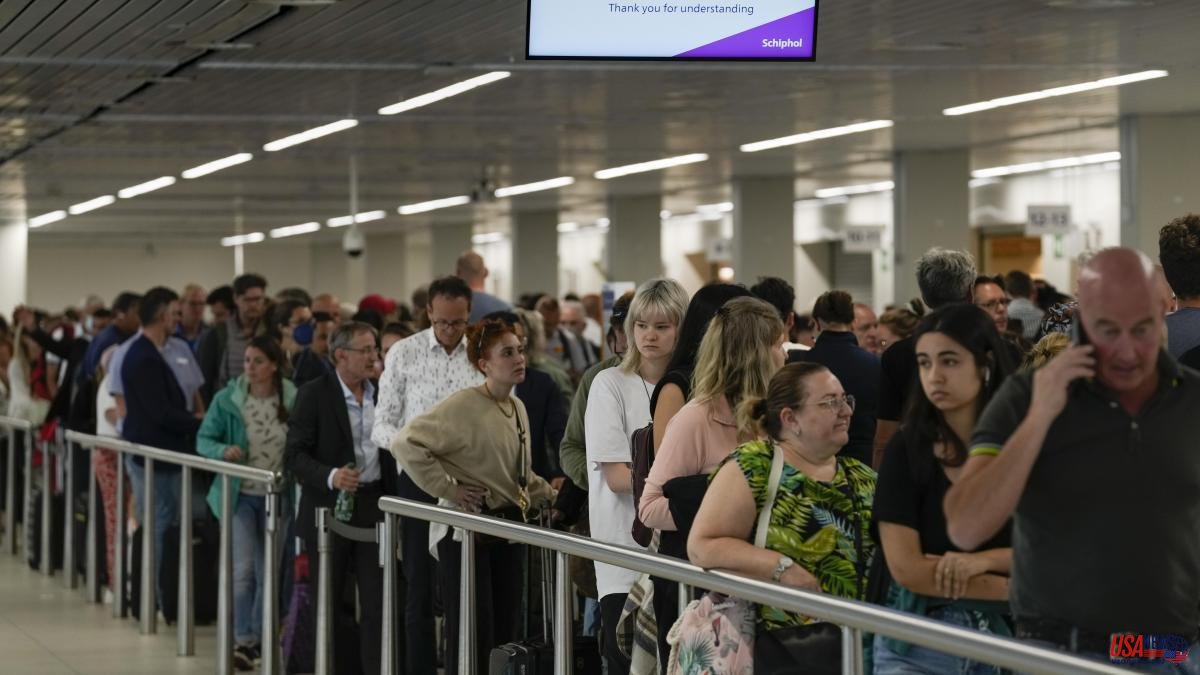 The situation of chaos that exists in airports and airlines in half of Europe is testing the patience of thousands of passengers and, in many cases, embittering their vacations in the first summer without restrictions after the pandemic. "You don't feel like flying," acknowledges Xavier Guasch, whose trip to Alaska to celebrate his birthday was marred by the air crisis.

His is one of the many stories behind every canceled flight, endless queue, or lost baggage this season. Arriving in Anchorage on June 9 from Barcelona – via Frankfurt – he was in for an unpleasant surprise. "I was missing one of the suitcases, where she had her warm clothes," she recalls. His belongings arrived nine days later, on June 18. “The suitcase was stopped at the El Prat airport for four days; I had to buy some clothes in Alaska.” But the worst was yet to come. On the way back they made a stopover in Frankfurt again. “It was June 24 and Lufthansa told us that our flight to Barcelona was delayed; after waiting three hours we are told that it is cancelled; we had to make a huge queue to claim and we managed to be relocated to another flight on the 25th, there were many canceled flights, ”he comments. He spent the night in a hotel hired by the airline 35 kilometers from Frankfurt, in a single room despite the fact that there were two people – he and his wife –. Once in El Prat, he was startled again: the luggage had not arrived. "This time not a single suitcase," he laments. "Ten days later we have recovered one of the two suitcases and we don't know anything about the other one," he adds.

Luggage incidents are of particular concern to passengers. The lack of information about it is one of the main complaints and what exasperates Lupe Cárdenas. Her brother Luis de Ella traveled to Ecuador on July 1 from Barajas to visit her family, a direct flight with Iberia, and her four suitcases have not arrived either. “She had not been to Ecuador for twenty years; He has spent more than 4,000 euros on the tickets –his daughter and his wife are traveling with him–, he has paid an extra for the suitcases and nothing has arrived; They brought gifts for the family they had not seen for so long, ”says her sister from Madrid. Lupe has spent three days trying to contact the Iberia baggage service, “but I always get an answering machine”. Her feeling is one of helplessness: “they play with your illusions, with a trip that you have prepared with great effort, and there is no one to attend to you”.

Even the most experienced travelers are surprised by the level of chaos at airports like Schiphol in Amsterdam. “I travel constantly for my work, I have been to airports around the world, including Atlanta [among the busiest in the world] on a day of air crisis; but I have never seen a disaster like the one at the Amsterdam airport last week”, says Joan Pérez.

This Barcelonan had to travel from the capital of the Netherlands to El Prat on Wednesday of last week. “I received a message on the mobile from Vueling warning me that he should arrive at Schiphol two and a half hours earlier; but even then I wouldn't have been able to catch the plane on time,” he says. At the gates of the airport he found a queue of 1.5 kilometers. "When I got in, I saw that out of twenty security check tapes, only three were working." Inside the queues were also "huge". This lack of control makes some passengers rethink traveling by plane again. "I will try to avoid it as much as I can," says Fernando Cardenete. This young man was stuck with his partner for twelve hours at Palma airport due to the Ryanair strike. The holidays have not started well for many passengers.