The Russians fight differently in the Donbass offensive

One, another, and another. 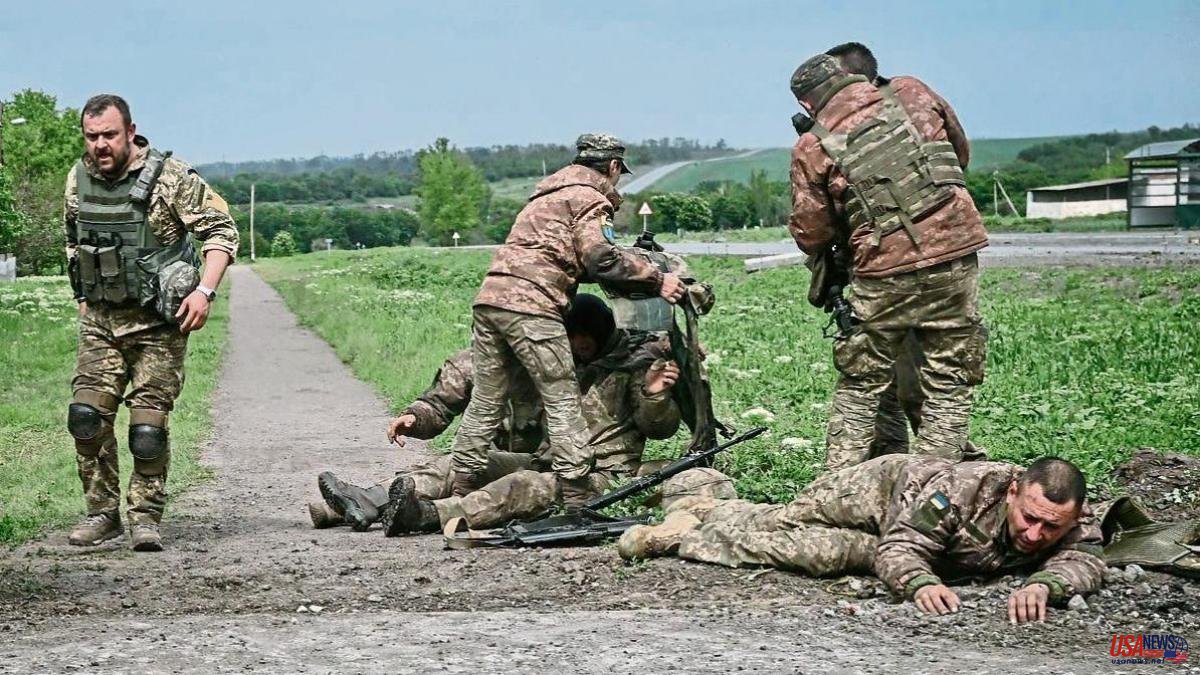 One, another, and another. And so intermittently during the day and night. Some explosions happen so close that they shake the walls of the hall adapted as the operations command of one of the Ukrainian army units in Metolkino, one of the three towns that until the beginning of the week it controlled in the east of Severodonetsk.

In the basement of the rural house, each man has a task: a young man with burns on his face does not detach himself from the radio system; another with more mature factions updates some Excel tables on the computer; another even older and with white hair writes a report by hand, he is the doctor. Each one knows that if the position they defend falls, not only will they put at risk the rest of the men holding this sector, but it could be the end of Severodonetsk.

"If any position gives room, we will be in the middle of the caldera, totally surrounded." The words are from Volodymyr, who coordinates, together with his commander, the next movements of the unit. They are both young, not older than 25, and graduates of the military academy. On a large map that they spread out on a table, they indicate the posts where each of their men are. In some places they are less than 400 meters from the Russians, in others, a kilometer and a half. “We are working as hard as possible to stop them. But the enemy has a peculiar tactic: destroy everything”, says Volodimir.

If at the beginning of the war the tactic of the Russian army was to advance with long convoys of tanks – they still use them, although not on the same scale – now they focus on endless artillery attacks, in addition to deploying small attack units. Their mission is to bomb without getting tired and then, once the population is devastated, take control of it. This is currently happening in Severodonetsk – the second largest city in the Luhansk province – where one of the toughest battles is currently taking place. But before that it had also happened in other Donbass towns where the invading forces have advanced in the last two weeks. President Zelensky already said days ago: "Russia is causing hell in the Donbass."

This includes Rubizhne and Popasna, where practically nothing remains. "Everything is destroyed, there are dozens of ghost towns," explains Yara, a paramedic who joined the army after 2014. She is currently part of the intelligence medical unit. Blonde and with dreadlocks that she gathers on her back, when the war started she was stationed in the Donbass, but they were quickly transferred to Mariupol, where the defense was much weaker.

“Columns of tanks were arriving from everywhere. We had stayed in a town in the rear and it was a tough fight to prevent them from passing. We managed it, but very quickly they were able to surround Mariúpol,” says Yara, whom we met one afternoon collecting medical supplies that some volunteers provided. Hours earlier he had returned from the Popasna front – where the Russians have managed to advance in search of uniting their troops with those coming down from the north through Bilahorivka or Izum. She looked exhausted; her black 4x4 had broken windows and holes in the doors.

Another paramedic, Vitali, who was also in the region in 2014 and works with one of the most experienced medical units in the Ukrainian army, assures that the way the Russians fight has changed significantly: “The caliber of the weapons is not the same; it is bigger, more powerful and covers a much wider space than before.” Seasoned soldiers also agree that the Russians are now using aviation on a larger scale, including reconnaissance and ammunition-carrying drones. And not only that, they also attack medical teams like never seen before.

The military ambulance that Vitali drives has the red cross that identifies it covered. “When we drive at night we turn off the lights,” he says. they shoot at everything.” This includes the field hospitals, the location of which is guarded as the greatest treasure by the Ukrainian forces. The unit Vitali works for has been attacked on several occasions and they have had to evacuate as soon as possible. “It's a tough situation, but when you have a patient on the table, there's no time to think. You just help,” says Liza Rohova, one of the nurses. Like many in the army, she had left a military career years before, when the Donbass war became a fight with consolidated defenses. And like many, she ran to enlist again on February 24: "It's our mission."

Anatoli is part of that group that rejoined the army in February. He is stationed in one of the last positions near the southernmost front, on the borders of the Dnipro region and Kherson; the capital of the same name is under Russian control. There you can see, at least in appearance, a greater calm despite the fact that the Russians are less than five kilometers away. In that place, the invading forces managed to advance the first days of the war and had control of dozens of towns. The Ukrainians pushed them back in late March, as they did on the strategic Mikolaiv front in the south-west of the country. Today both forces are building defense positions and it doesn't look like there will be any movement at the moment.

The scene repeats itself on many fronts. The counteroffensive to expel the Russians from towns they had captured has greatly boosted the morale of the troops. This has happened in regions like Kyiv or in Kharkiv, which, like the capital, is now trying – very slowly – to resume life. “We are very grateful to our Western partners for the supply of anti-tank weapons. They are really very effective compared to ours”, says Commander Andrí Almas, back in Donbass.