The rumba makes history at the Tivoli

After seven years in Andreu Buenafuente's Late motiv, Litus and his rock band switched to rumba and put on a musical, ¡Chakapum!, which they announced as “a rumba musical”. 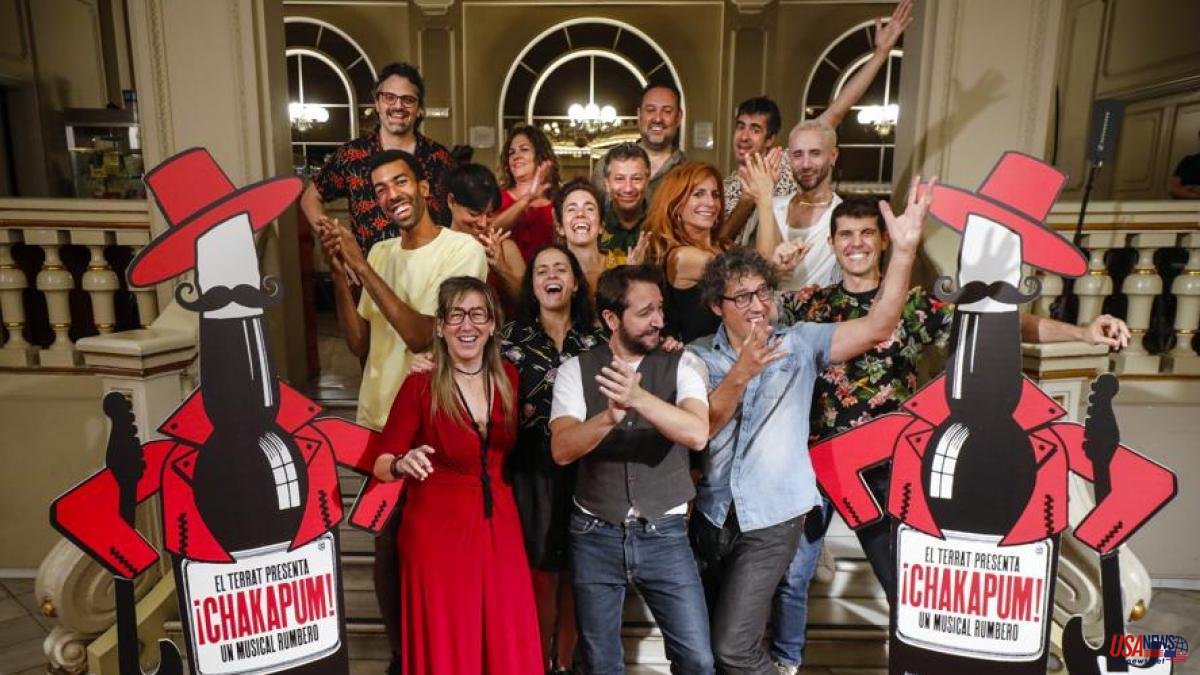 After seven years in Andreu Buenafuente's Late motiv, Litus and his rock band switched to rumba and put on a musical, ¡Chakapum!, which they announced as “a rumba musical”. It is no coincidence, of course, because Litus has sucked the rumba at home since he was a child: "The work is based on a precious memory of my parents' after-meals, where with friends they began to play, with carajillos and cava . And the energy of the night changed when they began to play rumba”.

El Terrat has produced this musical, which is directed by Xènia Reguant and will be at the Tívoli theater in Barcelona from July 21 to 31, in August it will be presented at the Príncipe Pío theater in Madrid, after which it will tour and intends to return to Barcelona more ahead.

“During the seven years of doing the program with Buenafuente, I told him anecdotes and one day he told me that he had to stretch the thread and do something –continues the artist–. So we thought of doing this musical, where there is also a tribute to the profession, to the workers of the baretos”.

The dramaturgy is by Joan Grau, screenwriter of El Terrat, who has built the work from what Litus told him. “I explained the anecdotes to him by chapters –says Litus– and from here this story has grown. There is only a minute and a half without music.”

Grau explains his version: “I come from rock'n'roll and I've immersed myself in the world of rumba. In the musical we travel through times, keeping in mind the political moment. It is a journey through the memory of Litus and the rumba and the result is a cross between a concert and a play. Xènia Reguant has broken all the schemes and the text that I wrote has grown in an incredible way”.

The person in charge of the dramaturgy refers to what the rumba is: “It is an ancient folk music and we bring it to today, to the modern rumba and beyond. In the show there is also Cuban music. The rumba emerged in the fifties, in the seventies it reached maximum popularity, in the eighties it sank and revived with the 1992 Olympic Games”.

Reguant defines the musical as "a ticket for a trip, with unexpected things". Next to the band there are also actors and actresses who sing and dance. “It is a choral show in creation and execution. It is multidisciplinary and works like a gear. The band plays live. It is the joy of living”, adds the director, referring to the popular song by Peret Sing and be happy.

In the artistic team there is another ace, Pablo Novoa, who is the musical director. “Everything is very exotic, because I am Galician. From the outset, I didn't want to know anything about the rumba, which still had the dandruff from the previous era, from the Franco regime. But it is popular, vital music, born on rooftops and there is rumba for many years. And in the show there is a continuous score”, declares the historic musician from Golpes Bajo.

Litus repeats that the rumba rules in the work: “All the great classics and five original songs come out, which help us explain the story, like ¡Chakapum! ”. That is why the company ensures that the public does not stop singing because almost all of them are known. The show's poster is the historic Tío Pepe bottle with Litus' mustaches and an electric guitar, a good summary of what this “rumba musical” will be.

Buy tickets from €23 at EntradasdeVanguardia.com