The Royal Society reigns in the madness of Montilivi

Real Sociedad took the three points from Montilivi after a vibrant match full of alternatives in which eight goals were seen. 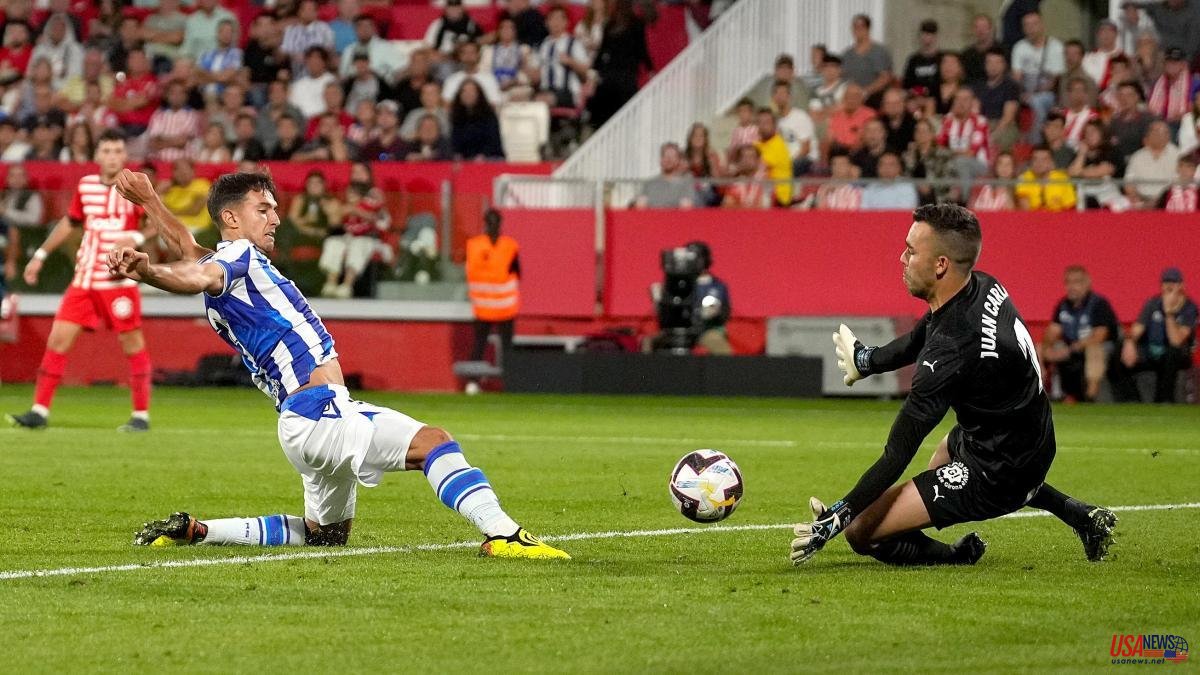 Real Sociedad took the three points from Montilivi after a vibrant match full of alternatives in which eight goals were seen. The Basques went ahead from the start thanks to Sorloth but the Catalans changed the game with two almost consecutive goals from Riquelme and Arnau, which Sorloth himself neutralized before the break. After the break, Taty Castellanos gave the locals hope by making it 3-2, but shortly after it was the visitors who, in the last half hour, turned it around with goals from Brais Mendez, Zubimendi and Kubo.

Without Stuani on the pitch but back on the bench after recovering from the cardiac arrhythmia he suffered a month ago, Míchel improvised an attack with Taty Castellanos and Manu Vallejo, the one chosen to replace Reinier's absence. The Andalusian forward, not very active throughout the game, was the main novelty in the gala eleven of the Madrid coach, who yesterday served the first of the two sanction games for the expulsion at the Betis field.

La Real did not present any surprises either, which did not suffer the casualties of Oyarzabal, Ali Cho or Sadiq in attack and who took advantage of the first one they had to get ahead. Kubo benefited from the lack of forcefulness that the Girona defense showed during much of the game and crossed for Sorloth to finish off at will, entering the far post.

The goal so early in the morning left a Girona touched that did not wake up until after a few minutes. But the response was lethal. First with a great goal from Roro Riquelme, who released a shoe from outside the area and slipped through Remiro's squad. And only 4 minutes later, Arnau saw the goal again, scoring the second, with a header.

But when the match was better for Girona, a jug of cold water with a new goal from Sorloth who, without letting the ball bounce, controlled a Zubimendi center with his chest and beat Juan Carlos by the short post.

In the second half, Girona came out much better and when only two minutes had been played, Castellanos put on a display of power by taking a ball in the middle of the field and planting himself in the rival area to beat the goalkeeper Remiro by force and the same inertia of the career.

Montilivi dreamed that victory was possible but Real responded with three goals. Brais Mendez tied again with a lateral free kick that no one touched; Zubimendi took advantage of a poorly controlled ball by a teammate in the area to put the boot and Take Kubo sentenced in a counter against a Girona overturned in search of the tie. The madness benefited the visitors.

Incidents: Match of the seventh day of LaLiga Santander, played at the Estadi Municipal de Montilivi before 12,217 fans. Before the start of the match, Cristhian Stuani showed the LaLiga Santander top scorer trophy to the stands and a minute's silence was observed in memory of Isidre Sala, former Girona player.