The Rome of the homeless

The sixth district of Rome has 257,000 inhabitants. 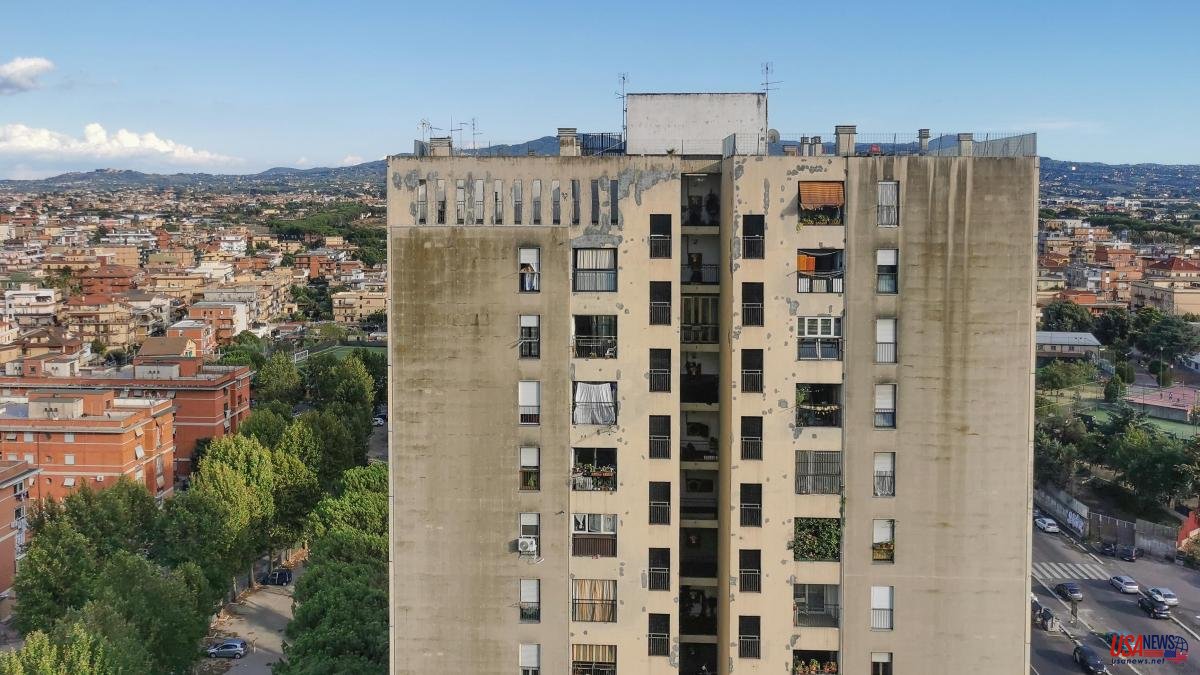 The sixth district of Rome has 257,000 inhabitants. If it were a city, it would be the twelfth in population in Italy, above Venice. It extends over 113 square kilometers on the eastern outskirts of the capital. Its social complexities are important. It is the district with the highest crime rate, with the highest number of people under house arrest. Where fourteen mafia clans coexist. It is also the poorest in Rome, and the one with the highest dropout rate. Only here are 65% of the protected housing of the entire city.

In Tor Bella Monaca, one of the neighborhoods that make it up, the end of Rome can be seen from some huge cement towers, all of them social housing. The houses end and the open space begins. They promise that, on the other side, one fine day you will be able to identify, from the top, the dome of San Pedro.

In the Las Torres shopping center there are no brand clothing stores or large multinationals, but rather a bar, a supermarket, a hairdresser or a pet store. It is a gray mass that stretches along lonely stairs and corridors. In the livelier cafeteria, no one is talking about the legislative elections that will be held next weekend.

“I don't know if I'm going to vote. So that. They are all the same, they only think about power,” says Luciana, a woman who has just turned 50. She used to clean houses, but she lost her job with the pandemic. She now lives thanks to the citizenship income, a subsidy for the unemployed that the 5 Star Movement introduced and that many of the parties want to modify because it has shown problems of form. She smiles when asked which political force convinces her the most. “Here they shoot, they traffic, this is hell. I don't know, honestly."

In this part of Rome, electoral speeches on deficits, the war in Ukraine or climate change are far away. Both the right-wing coalition – which will win the elections, according to the polls – and the Democratic Party (PD) will close the campaign in Piazza del Popolo, where the average income exceeds 57,000 euros. And not in Tor Bella Monaca, where it is 17,000.

“In the past the communists had 80% of the votes. Now we win because we are the only ones who talk about security. We have left premises to open new police stations”, says the president of the district, Nicola Franco, of Brothers of Italy (HdI). His office is decorated with a cross and an anti-abortion poster. The day before, he had to be evacuated because a criminal group sent a bullet in a bag to his office.

Angelo, who is already retired, is not going to vote either. “Fascism here does not matter to us. We just want to live in peace, that our children eat, that they don't shoot each other in the streets. You walk alone here, but this is a favela. Everyone looks at who comes from outside, ”he insists, lowering his voice. Gabriela, a friend of hers, points out: “They say that Giorgia Meloni is a fascist, although we'll see. There is only one who must return. Do you know who I say? With him there was no hunger. She does not say his name, but she does give his nickname, "uncle", Benito Mussolini. Shereen, an 18-year-old girl of Bangladeshi origins, would not be able to vote even if she wanted to. Since her parents are not Italian, she is not yet a citizen. There are graffiti on the walls against vaccines.

Rome's sixth district was the only one where HdI won in last year's municipal elections, but in the second round only 32% of those eligible voted. In these legislative elections, abstention is also emerging as the first party in Italy. The latest polls published during the legal period indicated that there were more than 10% undecided and 33.4% who were not going to go to the polls. If confirmed, it would be the highest abstention since the Republic was established.

“Here wins despair and rage. I've always been concerned with the environment, but now I try not to talk about the end of the world and climate change to people who can't make ends meet," explains Rossella Muroni, a candidate for deputy from the center-left, from a small bookstore in the center commercial. Its owner, Alessandra Laterza, needs police surveillance because of the threats she received after refusing to sell Io sono Giorgia, Giorgia Meloni's successful autobiography. Instead, an HID group gave it away to students at a neighborhood high school.

Who also needs an escort is the activist Tiziana Ronzio, decorated by the President of the Republic, Sergio Mattarella, for her fight against the mafia in the neighborhood. She, a health worker by profession, lives with her son in one of the huge towers, the only one that is yellow. Two policemen have become her shadows, day and night.

“I had two elderly parents and the social workers refused to come here. She was tired, and I decided to denounce the clans with names and surnames”, she says. What is now the premises of her association TorPiùBella, a benchmark for urban regeneration, was previously a place where prostitution was practiced. In the one opposite, they dismantled stolen motorcycles. “There were no bells, they trafficked on each floor, you found people lying at night, syringes on bedside tables. Everything happened. There were several families of clans, now there are still some, but it is no longer a supermarket”, she remembers, proudly, showing a terrace that she has rehabilitated for social use in the community.

He has to go to an event, but not before notifying the police, because he suspects that some members of the neighboring clans might attend. “Each building has its drug distribution plaza. This is the model of Las Velas de Scampia in Naples”, he concludes, speaking of the Gomorrah scenario.