For the riders who are concentrated on the corner of Diagonal with Enric Granados or on Rambla de Catalunya, in Barcelona, ​​little has changed since the law that regulates the sector of home delivery platforms was approved. 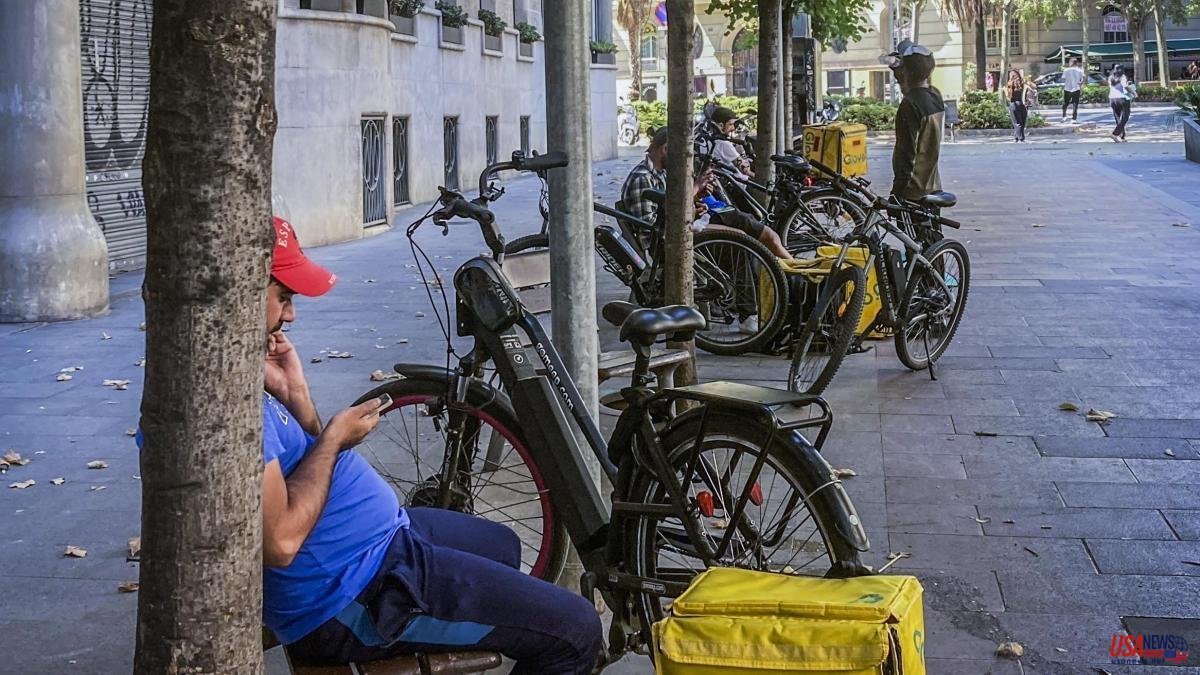 For the riders who are concentrated on the corner of Diagonal with Enric Granados or on Rambla de Catalunya, in Barcelona, ​​little has changed since the law that regulates the sector of home delivery platforms was approved. The norm celebrates a year of application just now, but it has not yet managed to completely put an end to the labor rampage denounced by the Government and the unions and on which the Supreme Court has already ruled. Delivery companies must hire workers, either directly or with subcontractors – as long as there is no illegal transfer – and not operate based on false self-employment. That says the black law on white, but not all companies comply with it. Some flagrantly.

“I know, but I work as a freelancer for Glovo. I do not have a direct account with them, I am rehired with another colleague. Well, he has the self-employed account and he pays me part of what he collects; between the two of us we make more orders and thus the ratings in the app go up and you get more services and more payment, ”explains a young delivery man of Pakistani origin – he prefers that his name not be published –. Along with him, other colleagues wait for the restaurants in the Diagonal Avenue area to deliver the orders. None have a contract, they say. “I work between six and ten hours a day for Glovo and I manage to charge between 60 and 70 euros a day; I provide the bicycle and mobile phone; in Just Eat they do hire you, but you charge less”, says another rider who is self-employed.

The companies in the sector still do not act under the same conditions despite the law. "The general balance is positive, but some large companies are boycotting and looking for resources to break it, playing to see who can last the longest to get rid of the competition," says Daniel Cruz, head of analysis and digital training at CC.OO. “It is a fight against time”, adds Adrián Todolí, professor of Labor Law at the University of Valencia.

The generalized conclusion for the social agents is clear: the Government needs new, more agile tools to regulate the activity of the new economy. Today the sanctions referring to the complaints prior to the rider law are being published, between 2019 and 2020. In Catalonia, Glovo has been sanctioned with 2,065 million euros by the Labor Inspectorate in Girona, Tarragona and Lleida , where it has been forced to regularize 351 riders. The Inspection is about to publish the sanction referring to the complaints made in Barcelona. Even so, at the moment it continues to work with mostly autonomous riders – this newspaper has tried to contact Glovo, without success.

Uber Eats, which to date works with fleets of subcontracted delivery people, is considering recovering the autonomous model, which it would combine with the contracted ones. From the company they comment that they develop an algorithm that would allow the rider to set the price of each service, a way to circumvent the law and compete with Glovo. Working with freelancers would allow them to save costs, they say, reach more cities and increase promotions. For Patrik Bergareche, general director of Just Eat in Spain, the rider law has a "fundamental" role in regulating the sector, although its pending issue, again, is that the Government "makes it happen". This company directly hires more than a thousand delivery men, in addition to having fleets of subcontractors. "We will continue to comply with the law, we are not going to work with freelancers," he stresses.

The times of administration and justice, thus, are slower than those of the digital economy. From the Ministry of Labor they emphasize that they will tighten the inspection and sanctions, they will even monitor restaurants that work with non-compliant platforms. But while the Inspection acts – current complaints can take up to two years to resolve – some companies continue with the strategy of outsourcing the production of a system that, de facto, they control. "If no stop is put in place, the risk of contagion to other activities is high," says Todolí. At the heart of the matter, consider the Government and social agents, is the maintenance of labor rights.