The revolution of the conductors

Although the occasions in which a woman can be seen occupying the podium of an orchestra are still rare, the progress that is observed in this regard on a global scale augurs a trend towards equality in a position traditionally associated with the manu militari of a captain. 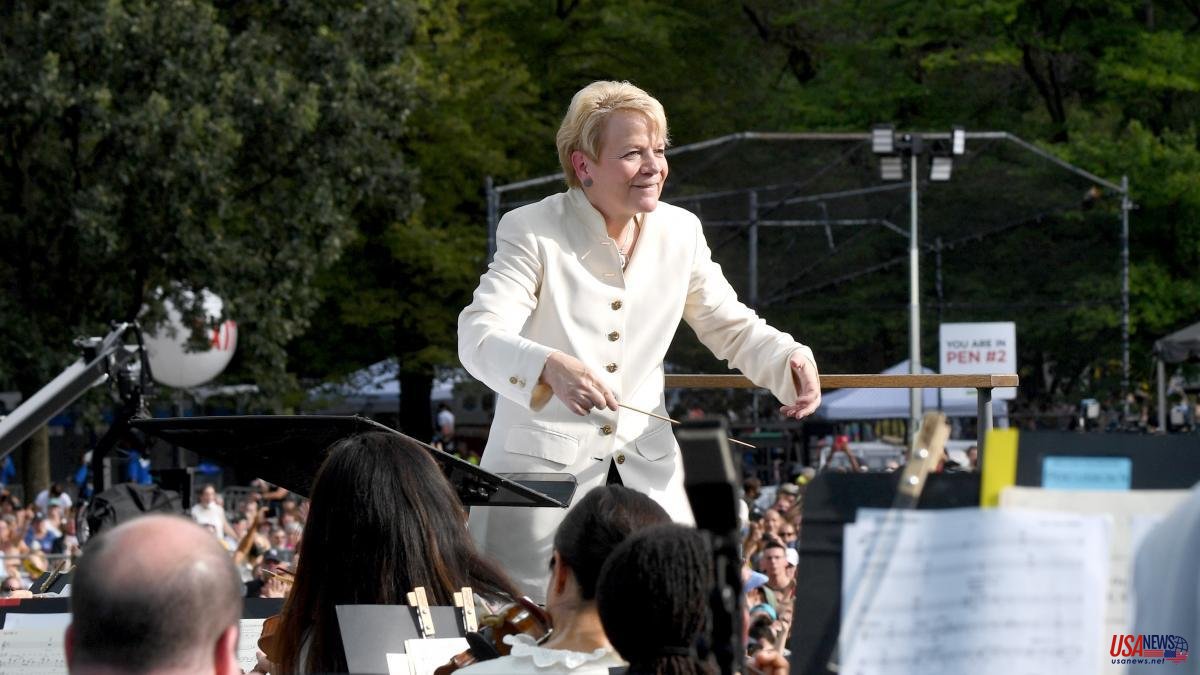 Although the occasions in which a woman can be seen occupying the podium of an orchestra are still rare, the progress that is observed in this regard on a global scale augurs a trend towards equality in a position traditionally associated with the manu militari of a captain. Barcelona, ​​without going any further, this week has the Polish Marta Gardolinska rehearsing at L'Audori her debut as the OBC's main guest conductor –tomorrow and Saturday– and the Finnish Susanna Mälkki preparing Puccini's Il trittico at the Liceu.

Bringing a large group to attention and ringing in unison has been the wet dream of business leaders, but in recent decades a democratic mood has replaced the old authoritarian system. Is it because the ways that women have been able to aspire to the podium have relaxed or has it been when they arrived that they have relaxed?

“Opening the doors to women was already implicit in a process of change, so we have contributed to shaping this new state of affairs, but because we fit in. We fit in because of the natural way of dealing with each other, because of the sense of communication and because of the ability to feel instantly how people are in the room”, says Gardolinska (Warsaw, 1988). With a clear and articulate gesture, the captivating and talented teacher rehearses a program of Polish echoes (Szymanowski, Penderecki...) and, as in every concert –on this occasion eight months pregnant–, she will be the promise of a hurricane. Well, as she herself affirms, in her job her personality comes first, gender after.

With its incorporation, L'Auditori is fulfilling its objective of reaching parity on the OBC podium in record time, while creating benchmarks for generations of girls with musical concerns. The wheel advances. Gardolinska has been, without going any further, assistant to the American Marin Alsop, one of the great and veteran, disseminator of the new creation and pioneer in imposing American music in the repertoire. Head of the Vienna Radio Symphony, Alsop has been on the lists of great formations looking for a leader, such as the Los Angeles Philharmonic.

“I learned extra-musical things from her that have to do with that way of making musicians feel very comfortable,” recalls Gardolinska. If you ran into her in the aisles, she would introduce herself to you, and she would do the same on the podium. In addition, she was very efficient at directing, leaving no room for personal games and tactics. It was all about the music she had in her hands. She was quick but in a very friendly way, efficient without stressing people out…an invaluable skill.”

Today it is already possible to speak of a stardom of female conductors: in addition to Alsop and Simone Young, the Australian who has had the ability to lead the way by distinguishing herself for her idea of ​​the Germanic repertoire, there are half a dozen other extraordinary conductors of a younger generation. . Mirga Grazinyté-Tyla would be one. The Lithuanian teacher is recognized for her work at the head of the Birmingham Symphony and for illuminating unexplored corners of music, questioning the canon.

Mälkki (Helsinki, 1969), for his part, has great directing skills. His double work in the field of contemporary music (he is the head of the Ensemble Intercontemporain) and in charge of the Helsinki Philharmonic broadens his perspective. Dudamel's assistant at L.A. Phil, he achieves vibrant and analytical versions with high doses of emotion. He attends La Vanguardia during a break from rehearsals with the Liceu Symphony, with which he says he is enjoying a lot.

“It is true that orchestras have changed, just as society has evolved – he subscribes -. The directors were in a position of authority and power and our understanding of leadership is different. It is something that can be seen in families and in the world of work... because the orchestra is still a workplace. Obviously directing is a great responsibility, but it is not necessary to do it instilling fear, which was the case until recently".

"For organizational reasons -he continues-, the orchestras are very traditional in terms of hierarchy: there are the tutti, the soloist, the concert master, the director. But now everything is more transparent and there is more interaction and discussion. And that's where the Another reason why female directors have penetrated is that there are many more women in ensembles, nothing to do with 60 years ago. Having a female baton would not have been natural if they hadn't already had their colleagues."

The Finn remembers from her beginnings on the podium, two decades ago, how Simon Rattle said in an interview that he preferred to conduct orchestras in which there were men and women because the atmosphere was more pleasant. “Everything has changed with the dynamic of being together with each other,” he adds.

Both Mälkki and Gardolinska coincide in their approach to a work methodology. For them it is vital to always have music as a starting point. The subject is neither about them nor about the orchestra, but about what they are creating together. It is equally important to respect the time of others, so they must be efficient and very clear when it comes to conveying their intentions and ideas. “You also have to work consistently and consistently,” says Mälkki. And have the confidence of the orchestra, build it, work from mutual respect”.

Other names to include in the star system of female conductors would be Emmanuelle Haïm, with intrepid interpretations but always in favor of music, with historical criteria. She is one of the few to have been invited by the Berlin Philharmonic (in Rattle's time). And from the younger generation, Karina Canellakis stands out, very well positioned in the market. It will be necessary to see her evolution but she has become one of the most sought after of her generation: she is the head of the Dutch Radio Philharmonic and main guest of the London Philharmonic and the Berlin Rundfunk-Sinfonieorchester, nothing less.

Another shining name of the future generation is that of Joana Mallwitz, now director of the Konzerthaus in Berlin, with a career in the world of opera and debuts at the Salzburg Festival, while doing good symphonic work.

From a much more egalitarian society, there is a tendency to criticize the leadership of the batons of other times, concludes Gardolinska, but the past must not be discarded. “It may have been necessary in a certain way –she argues-, since many of the orchestras were created after the world war and needed a firm hand to build. The leader was elevated, a distance was established... Charisma, respect and discipline helped, although creating a situation of greater stress and risk on stage. The change is positive but we should not forget that the consolidated level is the level where we come from”.