Confident and powerful, the members of the Executive Committee dug their grave and that of FIFA that December 2, 2010 when they voted 14 in favor of Qatar and 8 in favor of the United States for the organization of the 2022 World Cup, before the beard of the very same Bill Clinton, who traveled to Zurich, site of the election, convinced that his country would organize the competition. 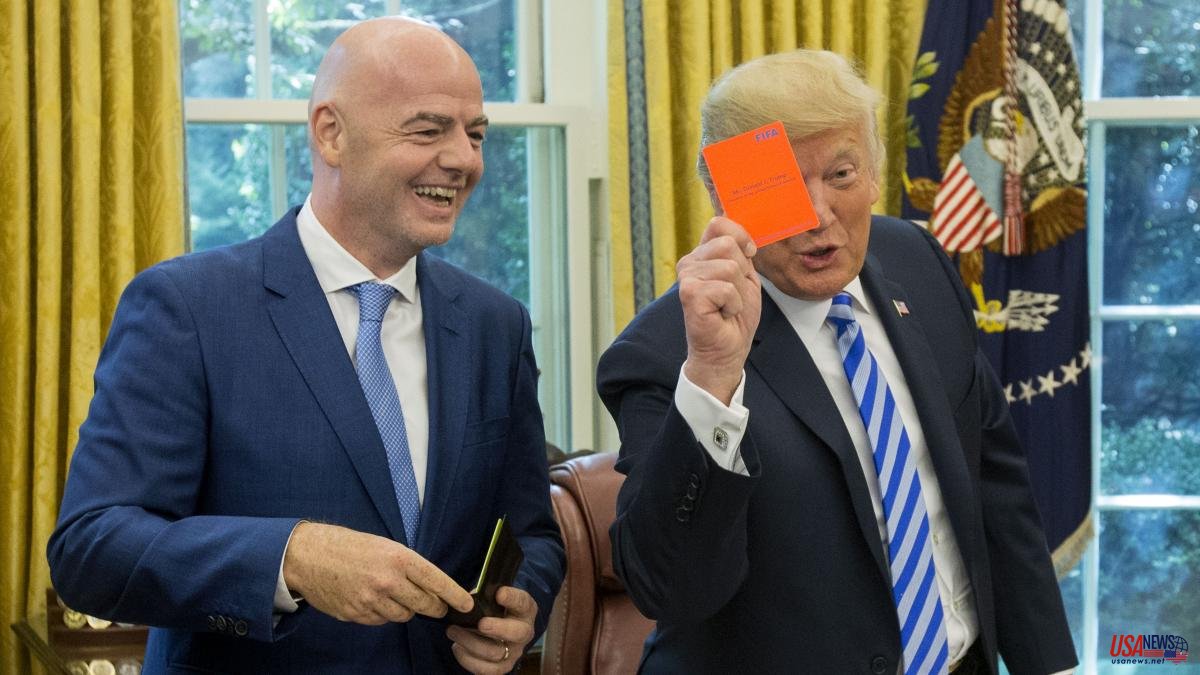 Confident and powerful, the members of the Executive Committee dug their grave and that of FIFA that December 2, 2010 when they voted 14 in favor of Qatar and 8 in favor of the United States for the organization of the 2022 World Cup, before the beard of the very same Bill Clinton, who traveled to Zurich, site of the election, convinced that his country would organize the competition.

There is a "pax Romana" and an American revenge: 16 of the 22 FIFA voters have been prosecuted or imprisoned. And the organization has ceased to be an aristocratic and secretive club. "FIFA used to be one of the few world power establishments that escaped US control. That's not the case anymore," says a soccer executive who prefers not to be identified.

How is it possible that FIFA adopted that decision to award the World Cup to Qatar and not to the United States without calibrating the consequences? "The election of Qatar was a mistake," Sepp Blatter himself, the Swiss who presided over the vote, summed up a few days ago, disastrous for his interests.

FIFA, like the IOC before Samaranch, was a kind of small club whose executive committee -24 people- reflected the Latin American and European hegemony of soccer. Its members, all men, could be divided between those who cut the cod and those who allowed themselves to be loved. In a secret way, they chose the venues according to unwritten balances: the World Cups alternated between Europe and America - that was until the 2002 Korea-Japan World Cup - and they formed lobbies, such as the one that systematically united the vote of Spain to that of the representatives South Americans. Inertia that began to crack with globalization and the commercial interest of US multinationals in the king of sports.

The United States wanted the 2022 World Cup and its representative on the FIFA executive committee, Chuck Blazer, trusted the promises of his peers, which is why he convinced former president Bill Clinton -and this in turn to great actors who supported the candidacy , like Brad Pitt, Morgan Freeman or Arnold Schwarzenegger - to attend the moment of glory in Zurich. “It is true: the voters had promised Blazer that they would support the US But football is a game of deception. What does a striker do if he does not fool the defender? ”, Points out the same source.

Despite his seniority, President Blatter made a decisive mistake, which aggravated the feeling of humiliation in the USA: deciding simultaneously, in the same Congress, the venues for two World Cups, and not just one, as had always been done until in 2010. This had the result of weakening and uncontrolling the exchange of votes and favors.

The agreed and foreseeable scenario was to grant Russia - Putin's Russia - the 2018 World Cup and the United States the 2022 World Cup, ahead of Qatar, Japan or Australia. Sepp Blatter saw in that distribution a perfect symbolism for a century without antagonistic powers. And Russia was chosen without problems for 2018…

What went wrong with the 2022 election? On the one hand, Western contempt for Qatar, related to a neocolonial vision of Bedouin, sand and new rich assigned to all the peoples of the Persian Gulf -without distinguishing that Qatar did not follow the pattern of behavior of Saudi Arabia-, and, on the other , underestimating the historical feeling of contempt of the soccer leaders towards the "gringos", the only great country that does not profess the monotheistic religion of soccer despite the fact that they organized the 1994 World Cup. And they forgot that a very active Qatari in the executive committee of FIFA -Mohamed Bin Hamman- had done an excellent job of courting, in accordance with the audacious desire of the then emir to place Qatar on the world map (also effective with the creation of a great television for the Muslim sphere, Al Jazeera).

Everything went wrong and exploded on November 23, ten days after the Zurich vote. Former footballer and UEFA president, Michel Platini, is summoned to the Elysée Palace table by President Nicolás Sarkozy. An agape for four, with two surprise guests: the crown prince Tamim Al Thani -current emir- and the prime minister of Qatar. The message is unequivocal: it is in the French Republic's interest, for reasons of state, to vote for Qatar and "drag" the remaining European votes (four in total).

Michel Platini alerted Blatter to the move but the Swiss, a polyglot with Latin manners (hugs, entertainment, smiles), no longer had room for maneuver because he had designed a FIFA tailored to the third world, which he showered with aid for the promotion of the sport that -coincidentally- guaranteed his systematic re-elections since he succeeded the Brazilian Joao Havelange in 1998. And among these "allies" were dubious characters, such as Jack Warner, from Trinidad and Tobago, who presided over and managed the votes of Caribbean soccer and Central American. “We have played according to FIFA rules”, Bin Hamman would say after the election (which “devoured” him after believing that he could bypass the ruling family).

What did France gain from the football pact? Preferential and advantageous agreements for the supply of gas and spectacular arms contracts. With a cherry on top: a year later, in 2011, a Qatari fund acquires the indebted Paris Saint Germain, a good deal for its owners, among whom is Sébastien Bazin, a friend of President Sarkozy.

Various sources and employees of the Baur Au Lac hotel in Zurich where Bill Clinton was staying have reported the attack of fury in his suite, with the breaking of some object. Incredulous, he had attended, like a stone guest, the spectacle of the proclamation of Qatar, cheered in his face by some "exotic" Arabs and the complicit gaze of a kind of FIFA feudal lords (the Grondona, Teixeira, Warner, Villar , Platini, Leoz…). A complete humiliation.

As soon as Clinton returns home, the US justice system gets going and it seems that it is drawing up a list of “most wanted men”, like the ones that still hang in police stations: those responsible for the election of Qatar. The New York prosecutor's office takes as an alibi the suspicious sale of the television rights to the World Cup, where it detects signs of bribery, corruption and money laundering (Trinidadian Jack Warner and Blazer himself, partners, allow the thread to be pulled, and he also agreed to carry a hidden microphone in FIFA meetings as of 2013, as part of his cooperation with the investigation). This is also where the firm Imagina US, a subsidiary of Mediapro, owned by Jaume Roures, enters here splashed, by rebound and within the framework of the sale of FIFA television rights for the region, which would end on July 10, 2018 agreeing with the prosecution from the Eastern District of New York in exchange for $24 million in fines.

The coup de force and the visualization of the revenge of the United States occurred in the early hours of May 27, 2015 when the Swiss police arrested seven FIFA executives, including two vice presidents, in their rooms at Baur Au Lac. at the behest of the US justice system. From the humiliation of Bill Clinton to the humiliating arrest of these soccer “untouchables”, who were participating in the FIFA Congress convened to elect the general secretary, to whom he aspired, “as usual ”, Sepp Blatter. Hours after the arrests, Attorney General Loretta Lynch presented in the US the results of five years of investigations and gave her verdict: those persecuted "have corrupted the world soccer business."

As if nothing had happened, Sepp Blatter won re-election two days after the arrests, for the fifth consecutive time. The collapse was complete, but as at the end of any sinking, the Titanic's orchestra continued to play. A mirage because on June 2 he announced that he was leaving office, aware that he either did or ended up behind bars. In these years, the media revealed many of the deals and deals of those who voted for Qatar in 2010, which was also the subject of an internal investigation by FIFA that did not find conclusive evidence of bribery (but there were indications, as in the concession of the 2010 World Cup to South Africa or the 2018 World Cup to Russia). Thus, Michel Platini had accepted a poisoned compensation from Blatter of two million euros for his services. In Spain, the strong man of football for three decades, Angel María Villar, spent twelve days in prison for a corruption case with no links to Qatar but on which the same shadow weighs as with former Barça president Sandro Rosell: the hand invisible from the United States.

"The United States is bad at losing," Blatter summed up the Financial Times in 2015. With his goodbye to a certain FIFA, soccer ceased to be alien to the control of the US and its multinationals, the main sponsors of the organization and its World Cups. . In 2010 they felt cuckolded and beaten.

Today, the World Cup venues are chosen by a show of hands and the representatives of each federation vote. Despite everything, neither the US nor FIFA nor the Swiss justice have been able to prove that Qatar bought votes. And the next World Cup, in 2026, will be held in Canada-United States-Mexico….