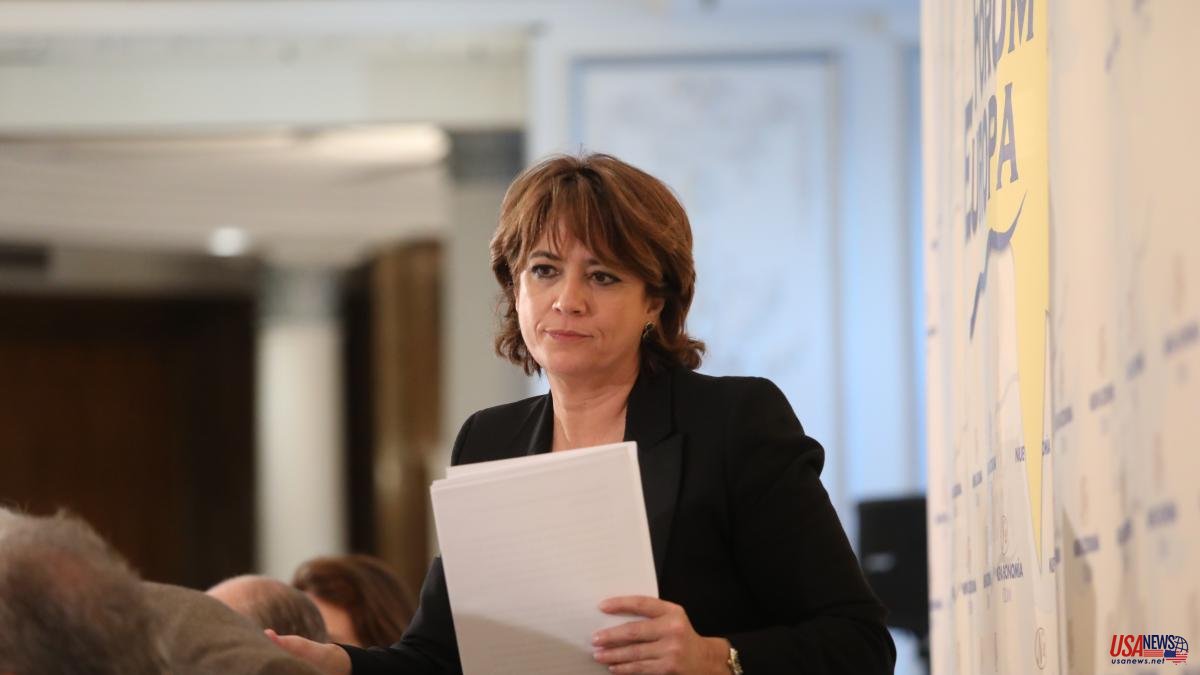 Dolores Delgado has said goodbye to the State Attorney General's Office. Two and a half years after arriving at the palace on Fortuny Street, she submitted her resignation in writing. The reasons she gives are health reasons. "She has a broken back," assured the Minister of Justice, Pilar Llop, at the press conference after the Council of Ministers on Tuesday, where she gave a detailed report on the state of Delgado's spine.

The precision of this information – almost a medical part – made it inevitable to remember that Adriana Lastra, until now deputy general secretary of the PSOE, also for health reasons, in her case due to her pregnancy, has also unexpectedly left her position this week.

"Coincidences in politics do not exist," say some parliamentarians. The same Council of Ministers that received Delgado's resignation letter agreed, at the proposal of the Minister of Justice, the appointment of Álvaro García, who until now has been Delgado's right-hand man. Both come from the Progressive Union of Prosecutors (UPF) of which he became a spokesperson.

Thus, the appointment of García can be considered the continuity in the work of Delgado. In the delicate situations in which she has been involved until her departure, she has been by her side as chief prosecutor of the Technical Secretariat.

This has been the case in several controversies related to José Manuel Villarejo, such as the opening of a file on one of the prosecutors in the case, or the meeting with a journalist linked to the former commissioner the same day he was released from prison.

It has also obtained their support in the internal crises of the Prosecutor's Office as well as in decision-making related to covid, the war in Ukraine or the gender perspective.

One of the delicate situations that Delgado had to face when he came to office was the role of the Prosecutor's Office in judicial matters related to the procés.

But despite being a replacement that ensures continuity, what parliamentary sources do highlight is that with Delgado's resignation, the Government can once again insist on the renewal of the General Council of the Judiciary (CGPJ) and its support before the Popular Party. in certain laws of Justice.

From the popular caucus, Delgado has been heavily criticized for having gone from Minister of Justice and Socialist deputy to State Attorney General without a break in continuity. That movement of the Prime Minister, Pedro Sánchez, has persecuted Delgado throughout her mandate.

A part of the body of judges wanted to knock down the suitability report necessary to be appointed attorney general and her election was appealed to the Supreme Court, although for reasons of legitimacy it was rejected. And above all, both in the judicial and prosecutorial career, she was seen as a movement to politicize the Prosecutor's Office.

Sánchez's phrase in an interview on RNE a year before Delgado's appointment in which he said: “Who does the Prosecutor's Office depend on? From the Government, well, that's it”, has been incessantly remembered in the judicial corridors.

Thus, the PSOE can now take advantage of Delgado's departure to try to force the PP to agree to a renewal of the body of judges, in office for more than three years, and support reforms such as the Law of Criminal Procedure (Lecrim).

In the modification of this rule that is intended to be carried out, the figure of the investigating prosecutor appears -in substitution of the investigating judge-, but the popular have already said that as long as Delgado continued as attorney general they would not support this change in the judicial system.

In addition, the Government can use its departure to respond to the claims of the European Commission, which in its latest report on the State of Law of the Union questioned the autonomy of the Prosecutor's Office with respect to the Government.

However, the PP is already pointing to Delgado's replacement, Álvaro García, as a politicized prosecutor and socialist rope. From the PP, he is linked to the socialists because as the delegated prosecutor for the Environment in Galicia he was invited in 2019 to a round table of a laboratory of ideas linked to the PSdeG on "A sustainable Galicia".

When he arrived in February 2020, the Catalan independence leaders were already sentenced, but some fringes were pending, such as pardons or the accounting process in the Court of Auditors. In these cases, Delgado has not been able to give any instructions because the entire judicial process took place while she was Minister of Justice and therefore she had to refrain from it.

What did remain in his hands was the appointment of the new chief prosecutor of the Court of Accounts just at the time he had to present the accounting demand for the external action of the Generalitat and for the use of funds for the 1-O referendum.

Despite the fact that the prosecutor has gone ahead, he did make a considerable reduction in the amount initially set as bail by the investigating delegate, going from 9 million to 3.4 million euros. The last step in this regard has been to report favorably on the return of 2.1 million euros to ERC after accepting the guarantees from the Institut Català de Finances (ICF), and which was agreed yesterday by the audit court.