The órdago de Díaz and the cerrojazo de Hacienda: this is how the most difficult budgets were agreed

The reiteration creates habit and the success of the pacts of the previous budgets agreed between socialists and the so-called space of change since 2018 -when the PSOE still governed in a minority and alone- made one think that the last accounts of the legislature (or penultimate, if the coalition closes a fourth bill before dissolving the Cortes) would be a breeze. 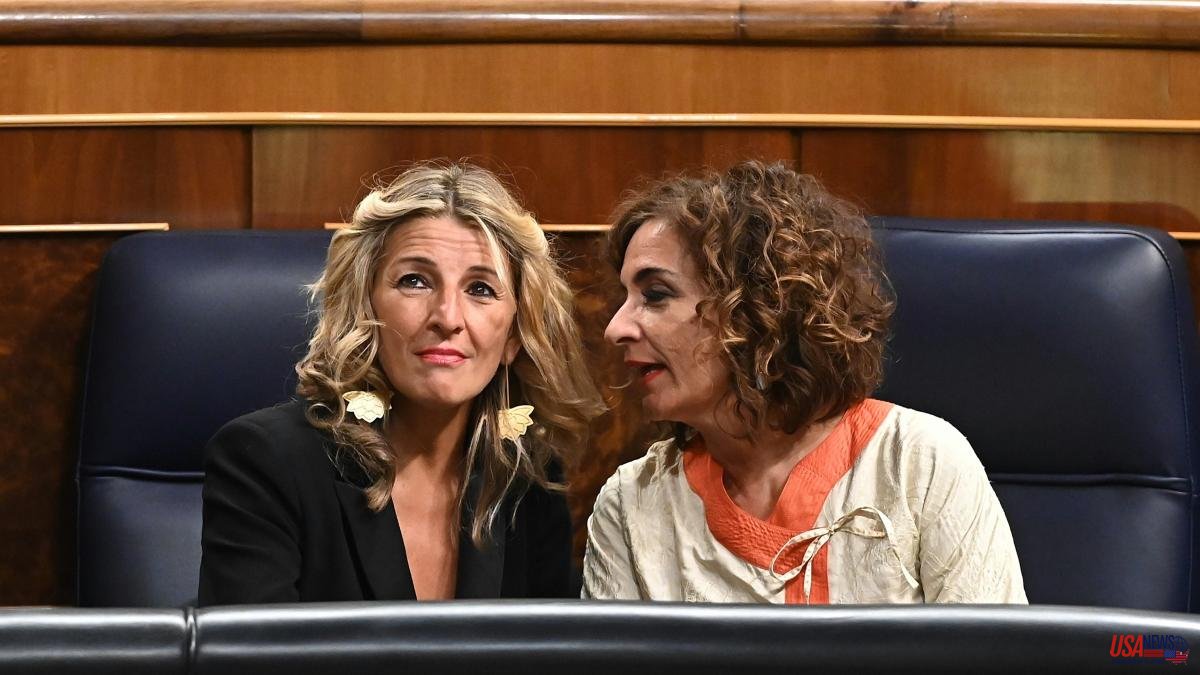 The reiteration creates habit and the success of the pacts of the previous budgets agreed between socialists and the so-called space of change since 2018 -when the PSOE still governed in a minority and alone- made one think that the last accounts of the legislature (or penultimate, if the coalition closes a fourth bill before dissolving the Cortes) would be a breeze. However, it has been the most complex and bitter negotiation between the partners, to the point that 10 hours before the Council of Ministers, the executive was about to blow up.

The final stumbling block, the one that threatened to provoke a political crisis of the first order, was the Family Law of the Ministry of Social Rights, directed by Ione Belarra. Late on Monday night, after the Treasury Department lowered one of its latest offers, Vice President Yolanda Díaz decided to launch a crack at the Socialists. In contact with Belarra and with the main budget negotiator, the Secretary of State for Social Rights, Nacho Álvarez – who has been the cornerstone of all the agreements between PSOE and United We Can these three years, from the Minimum Vital Income to design of the future model of residences for the elderly, going through all the annual budgets– was conjured with them. The motto was more or less: "If the PSOE does not make another proposal, tomorrow there will be no members of United We Can in the Council of Ministers." It was midnight.

Díaz had passed minutes before by the study of Aimar Bretos on Cadena Ser, an interview previously arranged whose purpose was to announce the benefits of the budget agreement. But when the time came, there was no deal to sell. The interview was about to be cancelled. But it was not done and what should have been a showcase of the understanding between socialists and purples became the last flashing red light on the dashboard: Monday was over and what should be brought the next day to the Council of Ministers was incomplete.

Trading continued after the announcement through the airwaves. The Treasury made a move and sent a last offer in which the child-rearing benefit reappeared, which was not in the penultimate document. That facilitated the final agreement, late at night. This help of 100 euros a month for mothers with children from 0 to 3 years old was, in effect, what led Díaz to affirm that he did not share "this way of negotiating." But it was a partial victory. The purples fought for the benefit to be universal, since now it is only paid to female workers. But the PSOE put foot on the wall and only gave in half. The final agreement was that the aid will be contributory. That is, to be charged by unemployed mothers or those who have been. Subject unlocked.

Another of the keys to the final negotiation was the extension of sick leave for mothers and fathers when they have a child. Social Rights claimed to increase permits progressively up to 24 weeks and had been defending it for a year, but the PSOE also pulled the handbrake with this measure and did not leave any crack through which UP could slip. There was no more spending, the Treasury transmitted, and the purples had to choose. The team of Díaz and Belarra was formed, therefore, by the extension of the aforementioned sick leave for mothers and now they aspire to fight the sick leave in the parliamentary processing of the law. The Socialists recall that in a negotiation there are aspects that enter and others that are left out and they cite the case of Díaz, who was left only a week ago without his claim to lower VAT on celiac products within the fiscal package.

The PSOE has a different version of what happened in the critical hours of the budget talks. Although they admit "problems" with the purple negotiators for the Family Law (the rest of the budgets were closed), Moncloa and the Treasury had everything designed so that the public accounts of 2023 would be approved on Tuesday yes or yes. In fact, some budget books were sent to the printer so that Minister Montero could pose with them after the Council of Ministers. And in the Presidency, the staging of the agreement was already designed on Monday afternoon. Precedents were used. The first year of the coalition, an act of Pedro Sánchez and Pablo Iglesias holding the yellow book was used. The second, a walk between the President of the Government and Yolanda Díaz through Moncloa. And this Monday the Tàpies room was prepared for a conversation between the two leaders in the armchairs. Difficult to think that everything was up in the air, they defend.

“How are we going to close the budgets in a few hours? Whoever does it, introduce it to me, we'll hire it”. With this phrase, the leadership of the Ministry of María Jesús Montero tries to downplay these last-minute differences. But it was a game of light and shadow until the end. The Treasury had reserved some letter, which it did not finish elucidating with its coalition partners. For example, the announcement of the extension of free subscriptions to travel on Cercanías and medium-distance trains. The Socialists wanted to make the measure their own, exclusively, despite the fact that it had been a request from the UP since before the summer.

In the negotiating strategy of United We Can, one of the battle horses was whether to link the Housing Law, in parliamentary process, to the budget agreement, as had been done in 2020 in the same Sánchez office in Moncloa. But in the last 48 hours, the leader of the United We Can space, Yolanda Díaz, decided to remove her from the negotiation because the PSOE flatly refused to join her and because there were too many stuck issues to add another problem. On the other hand, although the negotiators do not say that, having included it in 2020, even with a firm commitment to approval deadlines and signed on paper by the president and vice president, did not help it go ahead. The main reason for disagreement is the extension of the rental intervention to all owners, something that Transportes does not accept.

Removing the Housing Law from the equation generated tension between Díaz and Podemos, but finally, it was decided to go all out for the Family Law, and leave Housing for later, given the closedness of the PSOE. Belarra assumed the decision but did not share it and for this reason he recorded a video on Tuesday morning demanding pressure to modify the norm in Parliament.

In the process of weeks of negotiation, two of the main unintended facilitators of the agreement were the Andalusian president, Juan Manuel Moreno Bonilla, and the Valencian Ximo Puig. United We Can is grateful to both. The elimination of the wealth tax in Andalusia, amid great neoliberal gestures, placed the PSOE in a position to undertake a partial fiscal reform that a few months before it denied outright and that for United We Can was a sine qua non condition of the budgets. The tax on the great fortunes of the Government has a person in charge to whom the Spanish rentiers can thank: Moreno Bonilla, the tenant of San Telmo. In the middle of the debate, the Valencian president, Ximo Puig, announced a tax reduction antithetical to that of Andalusia, for the middle and working classes. He did it without counting on Ferraz or Moncloa, causing considerable anger but, in a way, he ended up forcing the Treasury to adopt a similar measure. United We Can found a fiscal reform oriented to their interests without hardly having to negotiate, hence they considered themselves winners.

For the plumber of the negotiation, Nacho Álvarez, this allowed him to concentrate his efforts on social investments, especially Dependency, Equality and Families. The satisfaction on Tuesday morning was evident in United We Can, not only had they managed to close an unprecedented section of expenses and investments with the PSOE, but they had also achieved a notable advance in income. "It is not a problem of spending ceiling but of income floor" is one of the mottos of Podemos since its creation, a message that alludes to a more redistributive taxation.

However, after noon on Tuesday, all that were smiles turned to grimaces. At 7:15 p.m., Minister Ione Belarra, who had reached the agreement exhausted – she is in an advanced state of gestation, despite which she participated in the negotiation until the last minute – wrote a tweet thanking her secretary of state, Nacho Álvarez, work in the negotiation. And exactly 15 minutes later the parliamentary spokesman for Podemos, Pablo Echenique, ruined that work, assuring that the PSOE had deceived United We Can with defense spending. There was no such deception. The Socialists did not show the figures of the increase in investment in Defense to their partners because they had agreed that they would do so outside the spending ceiling, that is, without subtracting from other items, and through extraordinary funds destined for special modernization programs. This is how PSOE and United We Can already agreed in August, with the purpose of not clouding the negotiation between partners or the subsequent parliamentary approval. And so the PSOE defended it yesterday: "There was a negotiating table that did know about the increase." Basically, Echenique's message not only caused notable displeasure to Nacho Álvarez, the great supporter of the United We Can agreements, and Yolanda Díaz, who led the process, but also sent a message to the rest of the legislative partners that will hinder the negotiation. A message that we already saw in the labor reform and that actually has its origin in the procés: "Apreteu, apreteu".