The PSC seeks political counterparts of ERC in the Catalan budgets

The support of the PSC to the budgets of the Generalitat has a price and it is political. 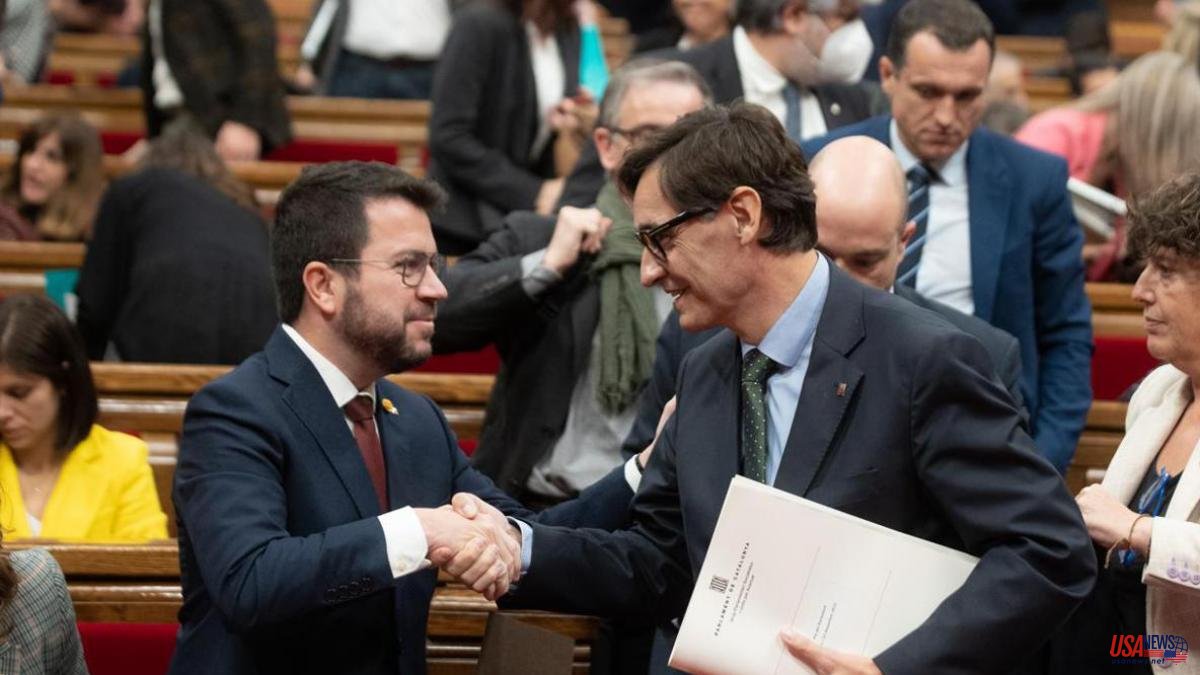 The support of the PSC to the budgets of the Generalitat has a price and it is political. This is the approach that Salvador Illa's party makes for the new year marked by the elections, especially after having assumed the political cost of the reform of the Penal Code demanded by the Republicans. Because in reality, not only the Catalan budgets are at stake, but also the electoral hegemony in Catalonia.

For the Government of Pedro Sánchez, the Catalan folder is closed until further notice. Dejudicialization may have an electoral cost for the Socialists, so now it is a matter of reversing the feeling of abdication before ERC that has left the Catalan agenda among locals and strangers. "Up to this point. We have done everything we had to do and more, and we will pay our political price; Now it's their turn,” say PSC sources.

Illa has an eminent role to reduce the dependence on ERC and change the political script of Catalonia. His plan is to show the true weakness of the Government, prop up the break with the independence bloc with a new agreement and claim his presidential profile at the head of the first party in Catalonia. And the purpose of the PSC with its demanding negotiating attitude in the Catalan accounts is for ERC to give in and, above all, for it to be noticed.

"Do you think they will have budgets without serious political consideration?" “We do not want to influence, or mark a profile; we want to determine ”, they point out in the PSC about their strategy. Something difficult to digest for the Government despite its parliamentary weakness.

The fact is that the agreement on budgets still limps in "the most important thing", in the most political demands of Illa, that is why the optimism that the Government sells irritates the Socialists, who deny that there is an agreement in principle.

In the PSC, Palau's “ninguneo” has not gone down well when the level of the agreement reached is 87%. They assure that this figure "has been taken out of their sleeve" and they judge the "pressure maneuver" as "irresponsible": "They do not play fair" and "they are not aware of the support they have", they warn.

The Government insists that it is only a matter of "political will" to sign an agreement that could even include Junts, with whom they say they have agreed on 50 budgetary measures. But this week there has been no appointment with Jordi Turull's party nor is there any scheduled for the future.

After the meeting of the Executive Council yesterday, the spokesperson Patricia Plaja added pressure, assuring that the Government will take the accounts to the Parliament "in days" if the negotiations are delayed "for partisan reasons". In this case, the PSC is clear: "They will find an amendment to the entirety."

The “maximum” proposal prepared by the PSC for the agreement remains “unchangeable”, according to the Socialists, and entails redefining the political path of the Catalan Executive this year. Illa tries to change the script of Catalan politics by turning the sovereignist debate towards "the projects that make Catalonia advance".

The large projects that the PSC wants to unblock (the Hard Rock in Tarragona, the fourth ring road between Sabadell and Terrassa or the expansion of the El Prat airport) are in this line and are an amendment to the interests of the ERC in the municipal elections. His voter does not see these projects with good eyes and the party has made a flag in the territory against his attack.

So are the proposals linked to Barcelona, ​​where Republicans and Socialists are fighting to emerge as an alternative to Ada Colau, and above all, the measures related to rationalization and good governance. Here, the PSC raises demands such as halting the expansion of Catalan delegations abroad and withdrawing control of subsidies to the media from the Government, from the Center d'Estudis d'Opinió (CEO) and from the Agència Catalana de Notícies ( ACN).

These are the proposals that, according to the Socialists, sting the Government the most, even more than the aforementioned macro-projects, on which both parties are exploring formulas to make a commitment explicit outside the budget agreement. They are measures designed to dilute some of the prerogatives of political control that the Government has because "an executive with only 33 deputies cannot control according to what things," they allege in Illa's party.

The clause against referendums that the PSC introduces demanding respect for the current legal framework” with the commitment not to incorporate into the budget “items that contravene it”, does not seem like a problem. It is an agreement modeled on the one reached at the dialogue table between governments, but amends the fact that Junqueras is still giving wings to a unilateral referendum.

"It gives the feeling that everything is going smoothly and it is not," they conclude in the PSC. This week there will be two more meetings to try to unravel an agreement that the Socialists will only sign if they deem the ERC counterparts sufficient.