The Constitutional Court put itself in the eye of the hurricane in the middle of the political fray and that will have consequences. 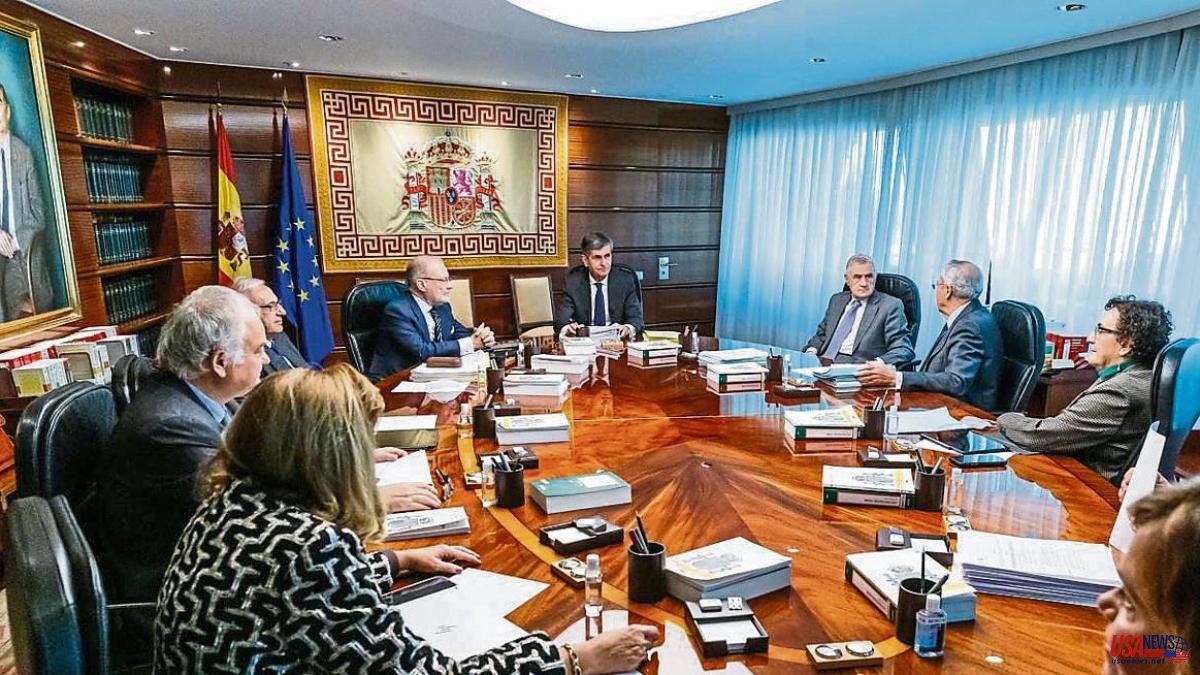 The Constitutional Court put itself in the eye of the hurricane in the middle of the political fray and that will have consequences. This is at least the view of the progressive magistrates who voted against stopping the parliamentary process of an amendment proposed by the PSOE and United We Can to reform the system of election of the magistrates of this same body.

The court has released the order today with the arguments by which the majority of the body, six magistrates of conservative sensitivity, chose to paralyze a parliamentary process, as requested by the PP to avoid the approval of an amendment that would change the system for electing TC magistrates and ending the blockade in which the General Council of the Judiciary (CGPJ) was immersed.

The order justifies the urgency and exceptionality that occurred in this matter to paralyze the processing and warns that the "integrity of the legislative procedure" was at stake. The reason was that a procedure contrary to the Constitution was going to be used to modify a law that affected the TC itself.

Five of the eleven magistrates fervently opposed this measure. In their dissent, judges Cándido Conde-Pumpido, Inmaculada Montalbán and Ramón Sáez, accused the majority of the court of "altering the fundamental principles of our parliamentary democracy, as well as the design of our constitutionality control system", as they believe the very precautionary measures requested by the PP. In fact, they consider that with this decision a "political burden hardly bearable" was thrown on the court.

In the individual vote, he insists that the deliberation and resolution of this matter has generated a division into two blocks of the members of the plenary session of the court, "which conveys to public opinion an image of mimicry or following of the parliamentary confrontation and the partisan political conflict ".

For the minority, apart from understanding that with this decision the foundations of parliamentary democracy have been distorted, it has also entered the political game of the appellants, in this case the PP.

For this reason, in his opinion, the court should have acted with the utmost caution, without haste or urgency. "The position that we have defended from the minority of the plenary session is not based at all on reasons from politics but on reasons proper to Law."

What they have defended are -as they explain- the constitutional values ​​and principles related to "respect for the inviolability of the general courts and parliamentary autonomy, in direct connection with fundamental rights of a procedural nature, such as the right to contradiction and the right to an impartial judge, taking into consideration the limits that our model of constitutional justice imposes on us".

The minority tried to stop the very precautionary measures because the job of the TC is not to interfere in legislative action but to review it a posteriori. These magistrates understand that what was done by the court "raises serious and evident problems of fit both from the principle of presumption of legitimacy of the acts that come from an organ of a State power vested with democratic legitimacy, and from the respect for autonomy parliamentary authority and the inviolability of the general courts".

Most understood the opposite. The order explains that the exceptionality of the matter, and for what it was necessary to intervene, was marked by the very speed that was carried out in the parliamentary process, which prevented the rest of the parliamentary groups from being able to intervene.

Likewise, the conservatives answer the accusations that the TC had never previously intervened in a process. After recalling a similar fact about the Parliament at the time of the process, they clarify that, however, "the absence of an identical precedent does not prevent this court from adopting the precautionary measure, provided that the necessary requirements for it are met".

In addition, they explain that the irreversibility of the damage was also taken into account: "if the parliamentary process of the legislative initiative in these terms continues until its approval by the plenary session of the Senate, the situation generated in Congress by the violation of fundamental rights would become irreversible , since that injury would have been consummated once the organic law proposal was approved; the eventual granting of the amparo would then have a merely declarative effectiveness, and no longer remedial".

On the contrary, they considered that the measure did not entail a serious disturbance, because the reform that was sought could be proposed again but using the legislative procedures provided for in the regulations of the chambers to give channel, within the constitutional limits, to the initiatives legislative. "The constitutional interest that demands protection by this court is the validity of the Constitution in its entirety," he points out.

Another magistrate, María Luisa Balaguer, issued her own private vote to show her disagreement with the order of the majority, for understanding that with the very precautionary measures the will expressed by the absolute majority of the Congress of Deputies has been altered.

"The TC prevents Parliament from completing its will, thus assuming a power that it lacks and, what is more serious, preventing the legislative body from carrying out its own, constitutionally attributed," he concludes.

The order and the individual votes have been announced one day after the CGPJ has chosen the two new magistrates who will go to the TC, a decision that had been blocked for six months. With this agreement between conservative and progressive members, the reform in question that caused such an institutional crisis no longer has a reason to exist and for this reason the PSOE and Unidas Podemos could reconsider their new presentation in the form of a bill.

The president of the TC, Pedro González-Trevijano, one of the outgoing magistrates, has convened the government plenary for this Thursday to give the pleasure to the two magistrates appointed by the body of judges, César Tolosa and María Luisa Segoviano, together with the two others proposed by the Government, the former Minister of Justice Juan Carlos Campo and the professor and former Director General of the Presidency Laura Díez.

Once the placet is granted, their appointments will be published in the Official State Gazette (BOE) and they will occupy their seats, replacing the four magistrates with their terms expired since June, including the president. These new appointments change the profile of the court, which will now have a progressive majority sensibility.