Aware that his pontificate is in the final phase, Pope Francis closed this Wednesday with a solemn mass an important summit of cardinals in the Vatican, which will surely be decisive for the design of the future of the Church. 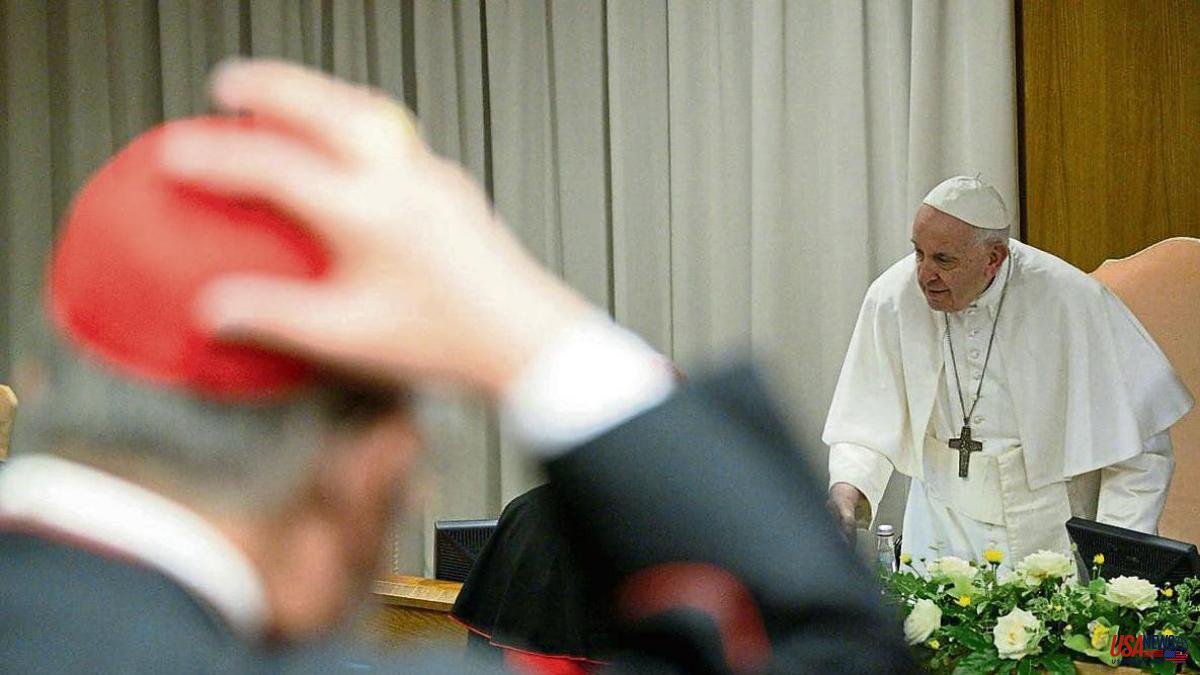 Aware that his pontificate is in the final phase, Pope Francis closed this Wednesday with a solemn mass an important summit of cardinals in the Vatican, which will surely be decisive for the design of the future of the Church. Nearly 200 people including cardinals, eastern patriarchs and superiors of the Secretariat of State have locked themselves in for two long days behind closed doors to study the new Apostolic Constitution, Praedicate Evangelium, with which the Pontiff has reformed the Roman curia despite the reluctance of some conservative sectors. It's been two unusual days at the Vatican. The last time something similar happened was in 2014 to talk about the family.

Everyone in Rome agrees that this meeting, held after Saturday's consistory in which 20 new cardinals were created, smells like a pre-conclave: although Francis, 85, has denied that he wants to resign immediately from the pontificate, he has left It is clear that "it would not be a catastrophe" if he took a step back if he did not feel strong enough to continue leading the Church in the future. That is why this cardinal summit is seen as a prelude to which he will decide his successor in the event that he dies or resigns.

Throughout his nine years of pontificate, the Jesuit has appointed 63% of the 132 cardinals under the age of 80 from almost 70 countries who will elect the next leader of the Catholic Church. Many of them from remote parts of the world, who had never met face to face with each other. Therefore, no occasion is a bad one to exchange a few words about the Church's vision of him. There have been meals in the Borgo Pío neighborhood or in some religious residences, outside the official agenda. It is not ruled out that in the coming days some names that have stood out will begin to be filtered and the list of candidates will be lengthened.

“Every consistory helps to get to know each other a little better, that will mean that those who are entitled to vote can have a slightly better idea of ​​the other cardinals,” said the new Colombian Cardinal Jorge Jiménez Carvajal on Saturday, who, being 80 years old, already does not have the right to vote. "The tone and the experience is that of a fraternal meeting, we work together even though we are separated by miles," said Cardinal Michael Czerny, one of those closest to the pope.

During these two days they were divided into linguistic groups – each cardinal could choose the work team in which to participate – and the meeting was preceded by a brief speech by the Pope, in which he invited them to speak freely about the issues on the table. Among other things, the role of the laity in the Vatican –with Francis's Constitution they can guide dicasteries (Vatican ministries), including women–, evangelization in a time like the present or financial transparency in the Holy See, one of the current challenges. Curiously, the session was also heard by the Italian Angelo Becciu, the first cardinal tried for corruption, whom the Pope seems to have pardoned halfway while awaiting the verdict of the trial. Although he has invited him to participate in the meetings these days, the Vatican has made it clear that he is excluded from the next conclave.