Pope Francis, still very weak from his knee problems, began a three-day trip to Kazakhstan on Tuesday to participate in the VII Congress of Leaders of World and Traditional Religions. 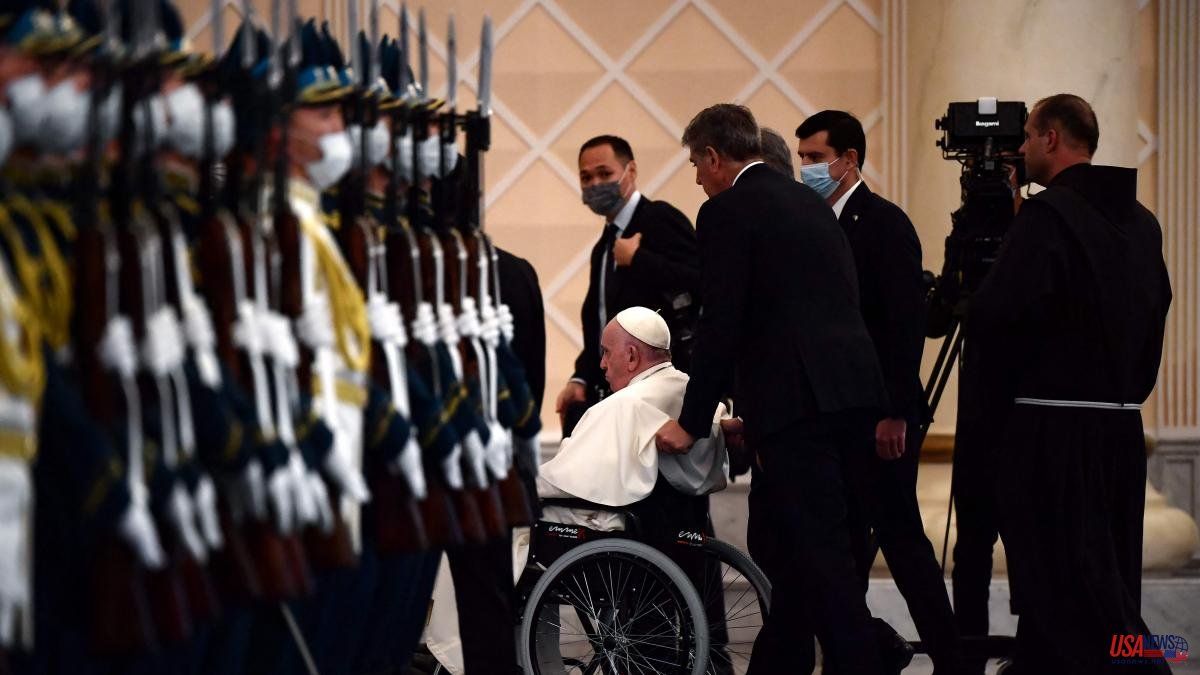 Pope Francis, still very weak from his knee problems, began a three-day trip to Kazakhstan on Tuesday to participate in the VII Congress of Leaders of World and Traditional Religions. It is a visit marked by the war in Ukraine, and especially by the absence of the leader of the Russian Orthodox Church, Patriarch Cyril I, who ultimately did not want to travel to Nur-Sultan and meet with the Pontiff for the second time.

The plane that has taken the Pope to the Kazakh capital has taken a longer route to avoid crossing Russian airspace, because then Francis would have had to send a telegram to Russian President Vladimir Putin, as established by the protocol with the heads of State of the countries it flies over.

"I have come to amplify the cry of so many who implore peace, an essential development path for our globalized world", he assured in his first speech, in which he also took the opportunity to defend the strengthening of multilateralism "to allow peoples to understand and dialogue" in a country that shares a 7,000-kilometre border with Russia.

In Nur-Sultan, the Pope has once again condemned the "senseless and tragic war caused by the invasion of Ukraine", following in the footsteps of John Paul II, who visited Kazakhstan in 2001 after the attacks on the Twin Towers in 2001.

Interestingly, Francis will coincide this Wednesday in Central Asia with Chinese President Xi Jinping, although a meeting between the two is not planned at the moment. During the usual greeting to the journalists who travel with him aboard the papal plane, the Jesuit pope has shown himself "always willing" to travel to China, a country with which the Holy See has made a historic rapprochement during his pontificate upon arrival to an agreement for the appointment of bishops.

“I have no news about that,” he replied when asked about a possible meeting with Xi, who is visiting Kazakhstan and Uzbekistan – where he will meet Putin – on his first trip abroad after two years of the pandemic.

Despite his obvious problems walking – he has used a ramp to get off the plane – the 85-year-old Pope advocated keeping this visit for being brief and not requiring large displacements, since most of the trip is concentrated in the interreligious congress.

It is there that Jorge Mario Bergoglio hoped to speak with Cirilo "as a pastor" and see him for the second time after their historic meeting in Havana in 2016, the first time that a leader of the Catholic Church met with a Russian patriarch since the Great Schism of the year 1054. Francisco has only spoken to Cirilo once since the war broke out, and by video call. His diplomacy was working on another meeting in Jerusalem in June, which finally did not take place either.