Not even five hours had passed since someone ordered the removal of the police device in some polling stations to stop the vote on October 1, 2017, when a dozen middle managers of the National Police, the vast majority of whom were inspectors, decided to take a step to front and write a statement. 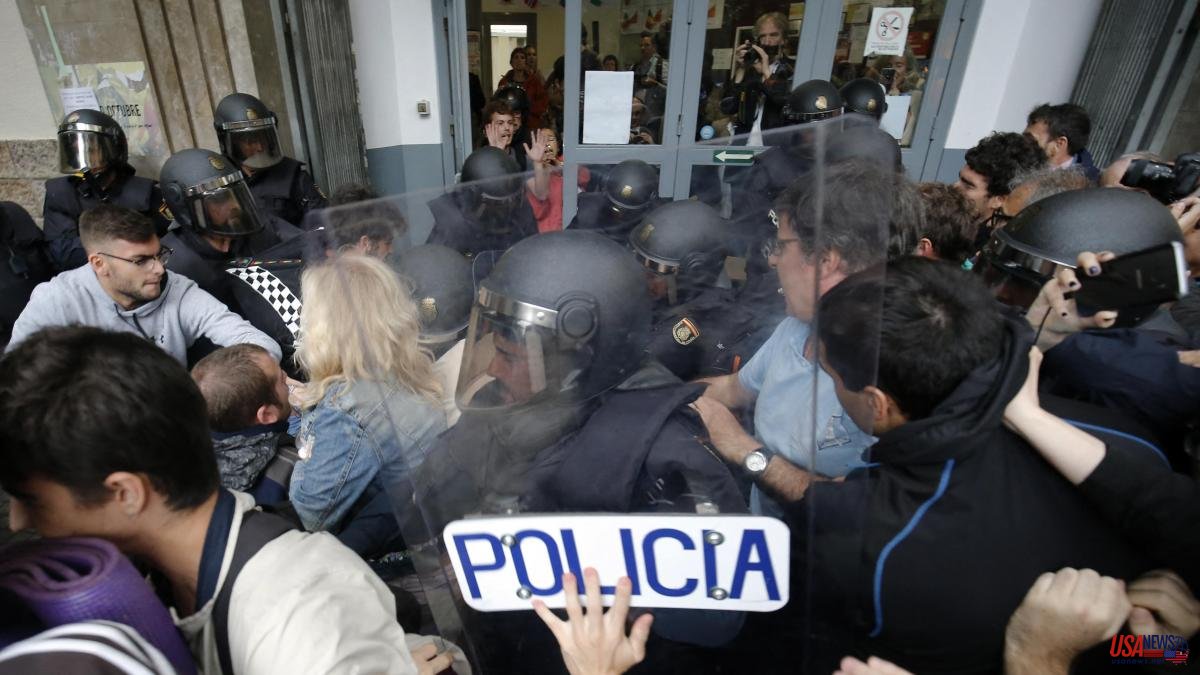 Not even five hours had passed since someone ordered the removal of the police device in some polling stations to stop the vote on October 1, 2017, when a dozen middle managers of the National Police, the vast majority of whom were inspectors, decided to take a step to front and write a statement. A handwritten complaint that La Sexta journalist Manuel Marlasca advanced at six o'clock in the afternoon, causing such a stir in the Ministry of the Interior and the police commanders that it was practically impossible to later identify the authors of a letter in which, among other things , apologized to Catalan society for the operation in which they had participated. The journalist Antonio Baquero also took the note in the first moments, but the complaint was diluted in the frenetic events of the days that followed. Its authors had to cower before the threats of the police officers who warned that there would be reprisals if criticism of a security device continued that despite the obvious fiasco, those same commanders tried to defend, pointing to the head of the Mossos d' Esquadra, Josep Lluís Trapero, as the only person responsible for his "collusion" with the organizers of the consultation.

Five years later, La Vanguardia has been able to identify and interview some of the signatories of that document. Not only do they ratify what they denounced at the time, but they assure, speaking on behalf of all the national police officers who supported the letter, that "time proved us right."

Nor will their names appear in this chronicle. Most of them are still stationed in Catalonia, from where they have never wanted to move; only a few have changed their autonomous community. “We are a hierarchical organization. At the time we already assumed the risk involved in writing and disseminating that complaint. It is not necessary to give any names now because it is the feeling not only of those of us who signed, but of many of the police and civil guards who forced us to participate in that disaster, "says one of the commanders.

The letter began by apologizing to the Catalan citizens for having had to participate in a device "doomed to disaster". An intervention "poorly directed politically that has caused irreparable damage to the social fabric to the society to which we belong." And he added: "We offer our deepest apologies for the excesses that may have occurred, reiterating that the very essence of the catastrophically planned service entrusted to us inevitably involves some scenes." The signatories went much further and expressed their "indignation with the incompetence, apathy and lack of knowledge in security and with respect to the social situation in Catalonia, from which the current Spanish Government suffers", to which they attributed an "incompetence" and “complexes and cowardice” that is costing the national police and civil guards dearly.”

Those images of national police and civil guards accessing by force and with violence in polling stations provoked a unanimous reaction of rejection. A dramatic rupture with a good part of Catalan society that the signatories assume will take "time to redo". Five years later, these police officers manage with "great pain" the conviction that "several generations will have to pass before a part of the society to which we belong does not look at a National Police or Civil Guard uniform with suspicion or that it identify with that of a kind of enemy who hit their parents or grandparents at the gates of a school.” Not to mention the "embarrassment" they still feel when they remember the "indignation" that meant "locking up policemen for weeks on a boat named Tweety".

That police device that Civil Guard Colonel Diego Pérez de los Cobos, at that time responsible for the Ministry of the Interior sent to Catalonia to prevent the referendum, had to coordinate, was doomed to failure from the outset. The policemen told it in their brief, drafted hot, and it was reflected in the sentence of the National Court that in October 2020 acquitted Major Trapero, the mayor Teresa Laplana and several charges of the Department of the Interior.

That trial evidenced the extent to which the political leaders derived responsibility from the justice system and the police for stopping a consultation that was impossible to stop with the capacity for mobilization that the independence movement demonstrated that day.

Those sessions in the inhospitable room that the National Court has in San Fernando de Henares dismantled the alleged "inaction" of the Mossos during the day. Beyond specific actions that neither Trapero nor the rest of the commanders who declared denied, the trial validated the device of "binomies" that the then second of the Mossos, the commissioner Ferran López, agreed with P érez de los Cobos, to draw up minutes in each center, given the impossibility of stopping the voting.

What happened next has already been told. Someone who five years later is still an X in the story, and it is not precisely De los Cobos, ordered the Police and the Civil Guard to enter the polling stations by force, apart from the Mossos. Hours later, when the images of the police violence had gone around the world, it was ordered to stop the charges, and some of those policemen, returning in plain clothes to those same schools from which they had managed to seize a ballot box, discovered helplessly that they were still voting.