The person under the skullcap 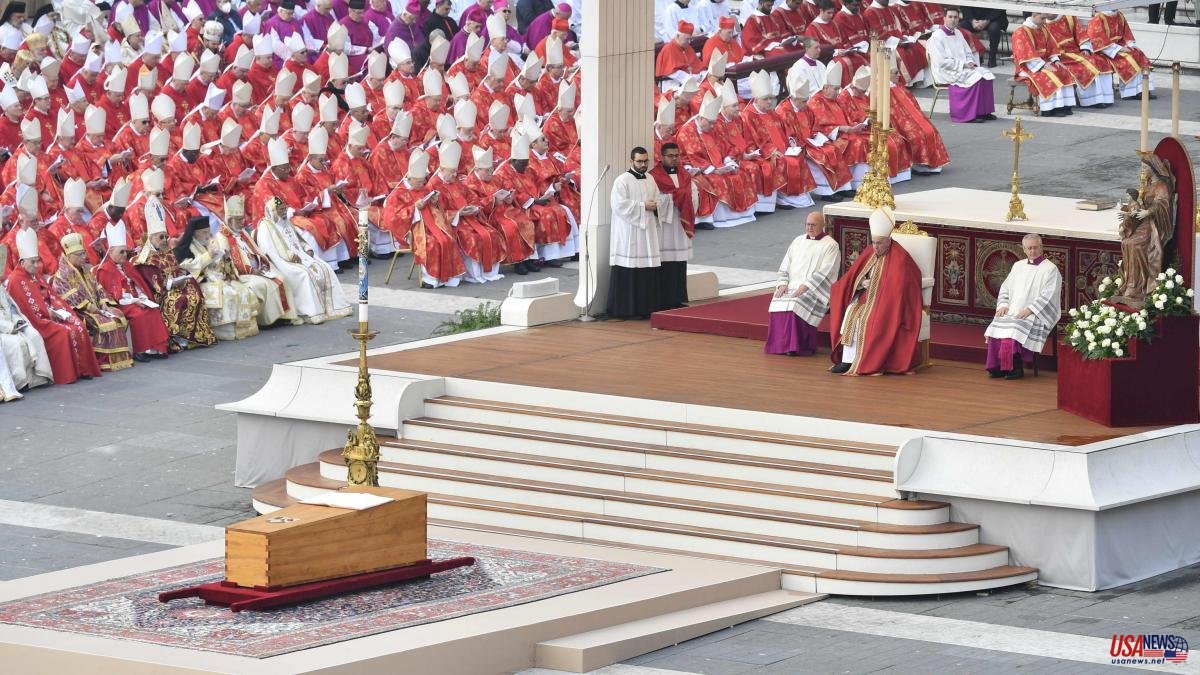 "Jesus I love you". Those were the three laconic words that Benedict XVI uttered, still conscious, when he began to die in the early hours of last Saturday. Just three words that summarized the tens of thousands of pages that the theologian Ratzinger and Pope Benedict had written over more than seven decades.

Yesterday, almost a week after his death, his successor Pope Francis presided over the ceremony with which the Holy See and the Vatican City State dismissed the man who had been in charge of them for more than seven years. Despite nearly ten years of imprisonment in the Mater Ecclesiae Vatican monastery, and the humid cold day that the Roman Tiber always turns into mist, more than 50,000 people gathered in Saint Peter's Square to show their gratitude to Benedict XVI.

The words of his successor glossed the gospel of the celebration, who presided over the ceremony, although it was celebrated by the dean of cardinals, Giovanni B. Re, they were essential in his description and appealed to his wisdom, sensitivity and service, wishing him that his joy “be perfect by definitely hearing his voice”, in reference to the God who for the theologian Ratzinger and Pope Benedict was fundamentally love. Let's not forget that his parents met through a press announcement in which his father defined himself as "a modest civil servant." For Reyes, the boy Joseph had a teddy bear as his most outstanding gift.

The theological reflection of the German priest and bishop always started from an Augustinian conception of God, in which he is not understood but is experienced as a feeling that is later expressed rationally. "Falling in love with God is the greatest romance," said the Bishop of Hippo. But the context of that crush coincided, in Raztinger's life, with one of the darkest stages of humanity. When he began to study theology, the Nazi death camps were still smoking and many of his colleagues wondered about the silence of God. Faced with this, science denied the ability to formulate absolutes that could not be measured empirically.

"The measure of love is to love without measure", Saint Augustine recalled there. Hence, during his priesthood and episcopate, first in Munich and then in Rome, Ratzinger started from the proposal of a personal introspection to try to discover the face of God in people and nature. The god of faith became perceptible to that of science through the Church, the body of Christ made up of the men and women who make him present in the world. Faced with scientists, the theologian proposed the experience of faith of simple people capable of seeing God in his creation and his creatures, and in acting in the world from the disinterested dedication that constitutes all true love.

Starting from the belief in the incarnation, the later Pope Benedict bet as much to discover the face of God as to make it present. For this, he followed the existentialist path of Heidegger, in which history was the context to experience and bear witness to revelation, but proposing the transcendental interpretation of St. Thomas proposed by Maréchal. From there would arise his vision of the God of ethics (Siewert) and of the God of aesthetics (Von Balthasar), which he contrasted, like Zubiri, with the God conceived as a simple immobile motor of other Thomist schools. From the head of state to the businessman, from the scientist to his concierge, Benedict XVI always had words and gestures for everyone.

Ratzinger had few direct pastoral services, so he made his own life a teaching, either by word or by testimony. This is how the son of a gendarme and a cook knew how to propose, in the context of nuclear tension, cultural change and the scientific revolution, that God is within everyone's reach because even the person who lacks means, or even lacks reason, is capable of love He was always very close to his brothers Maria and Georg. To this we must add, as Terence said, that nothing human was foreign to him: he liked music, animals, strudel and beer. And the meetings of collaborators, to humanize the work environment. His theological work was conceived as a mission to protect the faith of simple people.

Yesterday, Pope Francis, like Pope Pius in 1802, presided over the burial of the remains of his predecessor, who leaves behind him the attempt to reform the Church according to its origins and not according to its history, which he recovered some aesthetic elements in clothing and liturgy to elevate the aesthetic experience. He did not forget, like his admired Dostoevsky, that "beauty will save the world". He also promoted ecumenical dialogue, put the Holy See on social networks, promoted the simplification of marriage annulment, began to internationalize the Roman curia, addressed the clarification of sexual abuse of all kinds, opposed certain canonizations, proposed the mercy and prayer against the materialistic horizon, suggested the strengthening of communities in an individualistic world, opted for testimony as an evangelizing element or resigned because he did not believe he was the right person to continue his mission. It was the last lesson of a teacher, a teacher of teachers, of theology.

That is why yesterday, in addition to ten heads of state and eleven governments, including Queen Sofía of Spain, simple people from all over the world, many from they from the rural world, and representatives of 80 non-Catholic religious denominations who shared, like the pope emeritus, that "only love is worthy of faith", as his admired Von Balthasar would say.