Singing the Trilogy that Donizetti, immersed in the belcanto drama, dedicated to the Tudors (Anna Boleyn, Maria Stuarda and Roberto Devereux) is an artistic milestone within the reach of great sopranos in the history of lyric music: Maria Callas, Joan Sutherland, Montserrat Caballé . 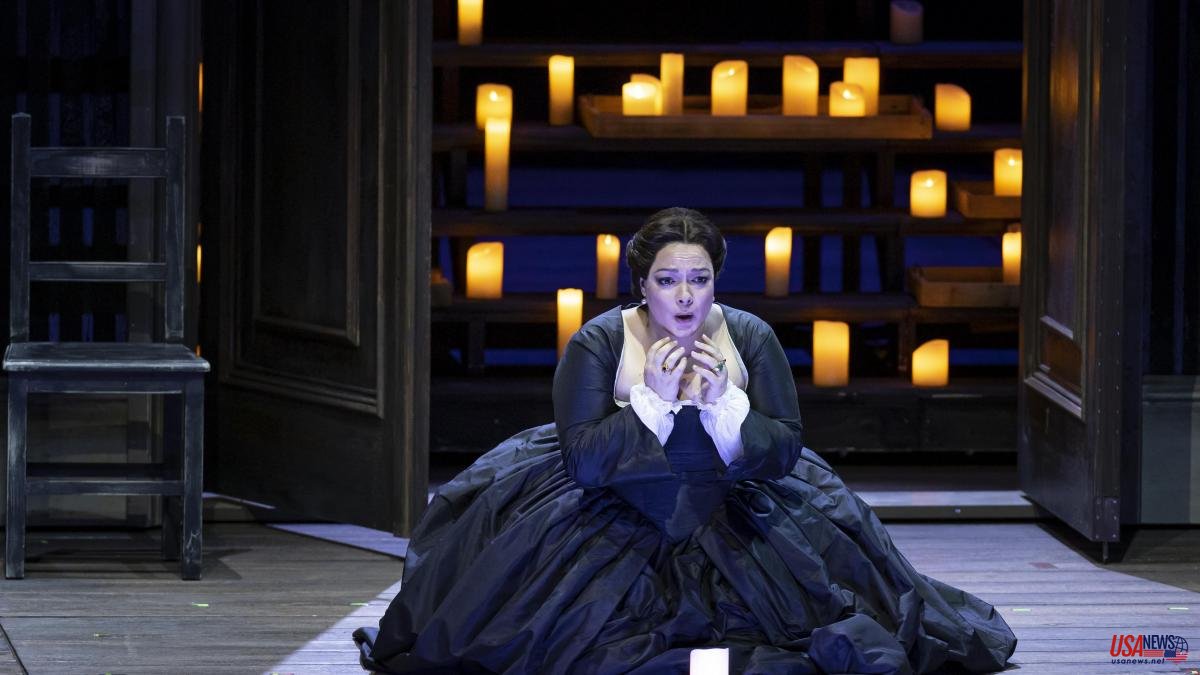 Singing the Trilogy that Donizetti, immersed in the belcanto drama, dedicated to the Tudors (Anna Boleyn, Maria Stuarda and Roberto Devereux) is an artistic milestone within the reach of great sopranos in the history of lyric music: Maria Callas, Joan Sutherland, Montserrat Caballé ...

With this difficulty in mind, the Palau de les Arts de València wanted to make its bet and contribute to the consecration of what is considered today the Italian soprano of the moment: Eleonora Buratto, daughter of Mantua and indebted to an exceptional voice, yesterday the public of the theater of the city of light was taken to the streets. It is a pity that in the second function of the opera with which Les Arts opens the season, the occupation was only 65%. Yes, the decrease in public is something general... Besides, it was a sunny and static day, one of those that would paint the air like Joaquín Sorolla.

The Duchess of Mantua has begun her climb to Bel Canto Everest by transmuting into Anna Boleyn. And if she seems to have reached the base camp comfortably, she will have to complete the ascent in successive seasons, as Maria Stuarda and as Elisabetta, Regina d'Inghilterra, characters from the following titles of the Trilogy. The desired soprano –perhaps too much, critic Jordi Maddaleno points out, judging by the nonchalant way in which she agrees to sing a verista title like Puccini's Madama Butterfly at the Met in New York while she has these Donizetti in progress– caused rejoicing at the moments key to this opera, which narrates the historical events that led the wife of Henry VIII to be beheaded on charges of adultery, incest and treason.

This was the case of “Al dolce guidami castel natio”, the aria in which the victim expresses delirium at her dire future at the hands of her king, a character convincingly sung by the bass-baritone Alex Esposito, even under the effects of the laurels that Les Contes D'Hoffmann had brought him the previous year in this same theater. But Buratto was also moved by his desperate duets with the Valencian Silvia Tro Santafé as Giovanna Seymour, the other great winner of the evening. Or next to hers in love with her Lord Riccardo Percy, a role that Ismael Jordi defended with exquisite passion.

The theatre, which yesterday hosted the annual assembly of Opera XXI to which the director of the Bayreuth Festival, Katharina Wagner, was invited to speak, shows signs of advancing steadily in this search for itself that it has waged since shelved the waste and management irregularities of previous years. And in this sense, there is nothing to object to the alliance of the artistic director Jesús Iglesias with the Dutch National Opera –for which he was once responsible– for this production that respects the majesty of the time.

The reggae artist Jetske Mijnssen gives play to the psychological pressure that the characters experience, trapped between walls and large doors. And she points to the next chapter of the Trilogy by introducing the figure of the little (future) Elizabeth I, daughter of Anna Boleyn and Henry VIII. Maestro Maurizio Benini, an expert bel canto singer, led the Valencian Community Orchestra with finesse, which together with the Generalitat Choir took part of the seven minutes of final applause. Of course, the thunderous ovation was for the protagonist.