The overwhelming displays of Booker and Tatum in the NBA

Emblems of both the present and the future of the NBA, Devin Booker with 51 points (in just three quarters) and Jayson Tatum with 49 points swept this Wednesday and made it clear why the Phoenix Suns and Boston Celtics are the leaders of the West and the This, respectively. 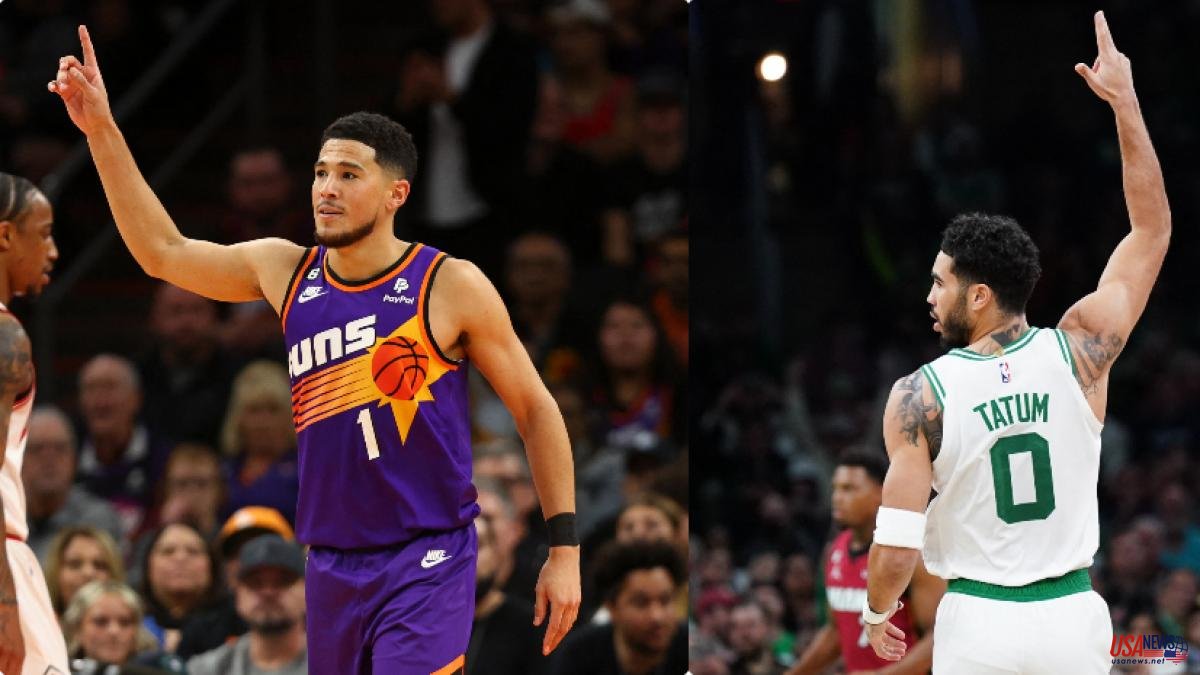 Emblems of both the present and the future of the NBA, Devin Booker with 51 points (in just three quarters) and Jayson Tatum with 49 points swept this Wednesday and made it clear why the Phoenix Suns and Boston Celtics are the leaders of the West and the This, respectively.

The sixth victory of these Phoenix Suns launched in the West came with an impressive exhibition by Devin Booker, who did not need to play in the last period to sign a tremendous statistic of 51 points (20 of 25 in field goals, 6 of 7 in triples ), 4 rebounds and 6 assists in 31 minutes on court (he scored 26 points in the third quarter alone).

In the disappointing Bulls, who crashed in the triple (4 of 25 compared to 15 of 33 for the Suns), the top scorer was DeMar DeRozan (29 points and 7 rebounds).

With 49 points (including 8 of 12 on triples), 11 rebounds and 3 assists, Jayson Tatum was close to perfection as the Boston Celtics chained their fifth straight win and closed November with an impressive 14-2 record.

Max Strus and Bam Adebayo each added 23 points for Miami while Al Horford had 6 points, 6 rebounds and 5 assists in 33 minutes for Boston.

Zion Williamson, with 33 points and 10 rebounds, slipped into the Spanish duel between the Hernangómez brothers and led the New Orleans Pelicans against the Toronto Raptors led by Gary Trent Jr. (35 points).

In addition, Puerto Rican José Alvarado played 27 minutes for the Pelicans in which he got 4 points, 2 rebounds and 5 assists.

LeBron James (31 points, 7 rebounds and 8 assists), Anthony Davis (27 points and 12 rebounds) and Austin Reaves (22 points) led the way for the Los Angeles Lakers in their victory against the Portland Trail Blazers that leads them to six wins in their last eight meetings.

Jerami Grant (27 points) was the best of the Blazers hampered by Damian Lillard's injury and who have only won one of their last eight games.

With a tremendous 44-27 lead in the second quarter, the Cleveland Cavaliers laid the foundations for their beating of the Philadelphia 76ers at the hands of Caris LeVert (22 points and 6 rebounds) and Darius Garland (21 points).

A huge Giannis Antetokounmpo (37 points, 13 rebounds and 7 assists) boosted a Bucks who are still hunting the Celtics and who have accumulated five wins in their last seven games.

Kevin Durant (39 points) and Kyrie Irving (27 points) were too much dynamite for the Brooklyn Nets for a regressing Washington Wizards who have lost four of their last five games.

Without the injured Karl-Anthony Towns, the Minnesota Timberwolves held on to Anthony Edwards (29 points) to defeat Ja Morant's Memphis Grizzlies (24 points and 6 assists).

The Spanish Santi Aldama played 17 minutes in Memphis in which he contributed 4 points, 3 rebounds and 2 assists.

The Denver Nuggets overcame a Houston Rockets who were already leading by 33 points in the second quarter to add their fourth straight win and continue their pursuit of the Phoenix Suns in the West.

Nikola Jokic was close to a triple-double with just 28 minutes on the court (17 points, 9 rebounds and 12 assists) while Kevin Porter Jr. stood out for the Rockets (23 points and 6 rebounds).

The Spanish Usman Garuba played 15 minutes in Houston and had 2 points, 2 rebounds and an assist.

Trae Young (30 points and 14 assists) and Dejounte Murray (27 points and 6 assists) were once again the star duo for the Atlanta Hawks, who easily defeated the Orlando Magic.

Paolo Banchero, number one in the last draft, added 20 points in Orlando.

After five straight losses, the Utah Jazz were reunited with victory by beating a Clippers who still do not have the injured Kawhi Leonard and Paul George.

Jordan Clarkson (33 points) and John Wall (26 points) were the best for the Jazz and Clippers, respectively.

With seven players over 10 points (including all five of their starting five), the Sacramento Kings resoundingly defeated the Indiana Pacers with Harrison Barnes as top scorer (22 points).

Bennedict Mathurin and Jalen Smith each had 22 points at Indiana.

Total ruin for the San Antonio Spurs, who have nine consecutive defeats and who this Wednesday could not beat a rival from the lower part of the West like the Oklahoma City Thunder.

Without the injured Shai Gilgeous-Alexander, the Thunder were guided by Jalen Williams (27 points and 6 rebounds) and the Spurs had Devin Vassell (25 points and 7 rebounds) as a reference.