'The opponent', an infernal duel

A room on any floor of any wealthy family, with cold lighting, which gives the room a soulless appearance, is the setting where the action of L'adversari takes place, an approach to the life and circumstances of Jean- Claude Romand, who was fictionalized by Emmanuel Carrère in the homonymous book. 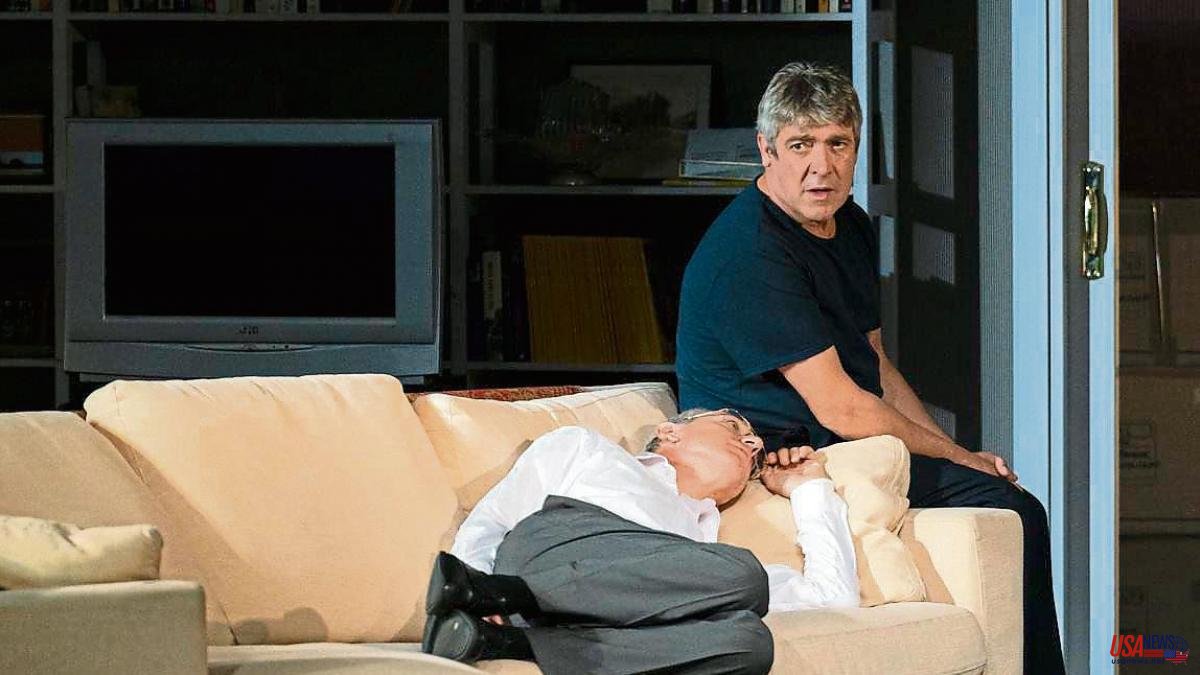 A room on any floor of any wealthy family, with cold lighting, which gives the room a soulless appearance, is the setting where the action of L'adversari takes place, an approach to the life and circumstances of Jean- Claude Romand, who was fictionalized by Emmanuel Carrère in the homonymous book.

The story of this fraud, who lied about his work and who ended up killing his entire family and even the dog when he was caught in his own big lie, shocked France and the world when it was discovered in 1993. Temporada Alta inaugurated yesterday the 31 .th edition with this theatrical proposal directed by Julio Manrique, and will be seen in March at the Romea.

The actor and director discovered the work of the French writer and decided to bring it to the stage. With two greats of current Catalan dramaturgy, Marc Artigau and Cristina Genebat, he confesses that it was difficult for them to find the solution, that is, how to bring Romand's story to the stage. Because it was not an easy task, even more so when Carrère's novel is well known and has many admirers.

But in view of the result that they offered yesterday at the Teatre Municipal de Girona, this trio not only found the solution, but they did it with flying colors. The proposal directed by Manrique is unfaithfully faithful to the original text, as it should be. Everything is literature, but we are talking about novels and theatre, two genres that express themselves very differently.

Now, if we add the interpretation of Pere Arquillué and Carles Martínez to the three mentioned, Carrère's literary material takes a shocking flight. Arquillué is Carrère and at the same time he unfolds into endless characters: his wife, his children, his parents, his mother-in-law, his friend, his lover, the judge, the prosecutor, the attorney ...

And Martinez is Romand. He doesn't look like her and, instead, has her same introspective, sad and sunken look. A duel at the gates of hell that moved the Teatre Municipal de Girona.

This edition of the Temporada Alta festival begins with three tempting proposals from the best performing arts, although we will have to wait until tonight to discover Angélica Liddell's new work. The always controversial artist presents Caridad in El Canal de Salt, where she explores the limits of forgiveness of the human soul.

The third proposal coincided yesterday in Girona with L'adversari a few hundred meters down the river, on the other bank of the Onyar. In the La Planeta room, Majorcan playwright Marta Barceló premiered Tocar mare, with Lluïsa Castell and Georgina Latre, and directed by Jordi Casanovas. The piece, now developed, won the 2016 Dramaturgy Tournament, which is celebrating its twelfth edition this year.