'The novelist and her film' (★★★★), a jewel by Hong Sang-soo and other releases of the week

These are the movie premieres that hit the screens starting this December 28:. 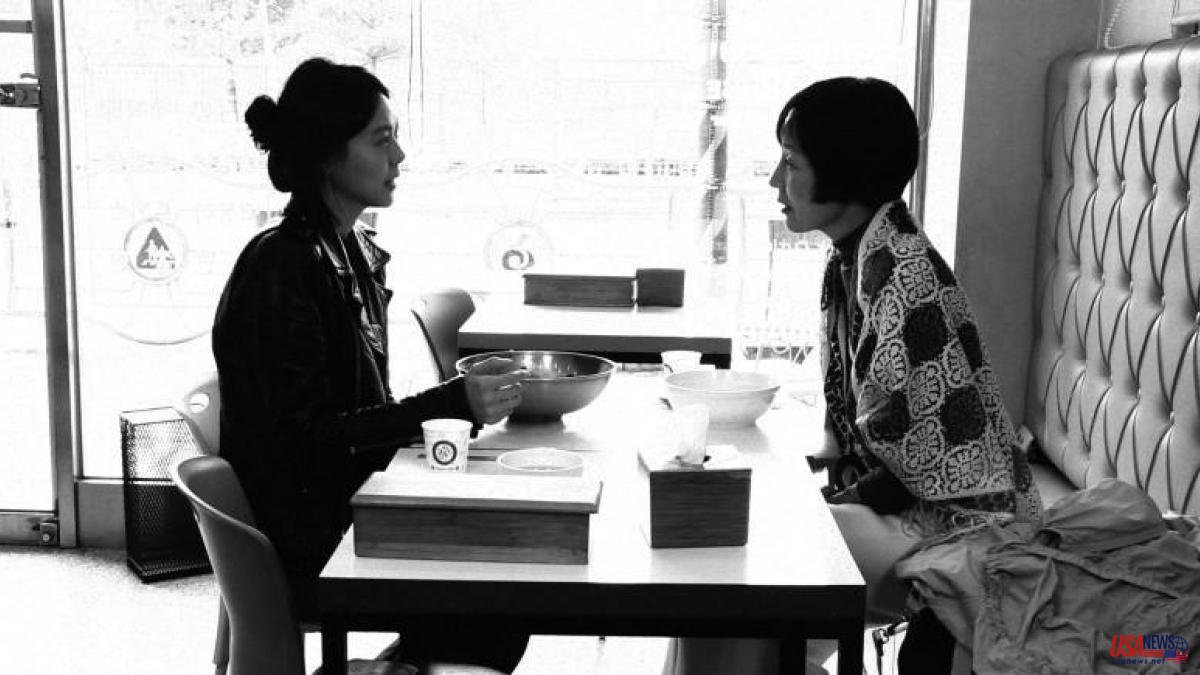 These are the movie premieres that hit the screens starting this December 28:

A prolific year for lovers of the prolific Hong Sang-soo: Introduction was released in March, Ahead of You in July and now, to close the triumphant year, The Novelist and Her Film, three delicious minimalist works that have been added to the series for some time now. years familiar aesthetic and figurative universe of one of the best filmmakers of the present. Returning to the crystalline black and white that he sometimes frequents, in La novelista y su película we find his unalterable trademark: a set of scenes (few and long) structured around chance encounters, set shots with few camera movements and no cuts. and abundant dialogues, apparently banal at first but which, as they progress, reveal an extraordinary psychological and intellectual richness.

The protagonist, a famous novelist, visits an old friend in the bookstore that she now runs and they talk for a long time. He says goodbye to her and, in a public space, he happens to meet a film director she knows and her wife (all wearing anti-covid masks). The three of them walk immediately through a park and meet a movie actress and her nephew. The novelist and the movie star hit it off, have coffee and the writer, who wants to make a short film, proposes to the actress to be the lead. Chance again: the novelist and her bookseller friend, through the actress, will meet again and, with the participation of a celebrated poet, they will empty together, around a table, a large number of bottles of alcohol, one of those proverbial drunken scenes (fifteen minutes and a single shot) that Hong Sang-soo comes up with round, masterful.

There is still a final stretch left, a beautiful declaration of love from the filmmaker to his muse and lover Kim Min-hee with a brief color insert and a private screening of the already made short. With his characteristic polished, light and harmonious style, the director (and also a screenwriter, producer, photographer, editor and musician) achieves a very truthful painting of the human being and its contradictions, interspersing humor and digressions as unexpected as the emotional lesson in the language of the signs. You leave the film levitating in a cloud of pleasure. Another three by 2023? I wish.

Considered one of the most emerging directors in the rise that Romanian cinema took and the author of well-remembered titles such as Beyond the Hills (2012) or The Exams (2016), Cristian Mungiu is a regular at the Cannes Film Festival, where he has been awarded several times, including a Palme d'Or for 4 months, 3 weeks, 2 days (2007). His latest film, R.M.N., has also passed through there, which has garnered some malicious criticism, but once again conquering a creative space that has always been linked to this filmmaker. In times where the issue of migration, the reception and especially the hatred that they produce towards those who feel invaded in their lands, the Romanian filmmaker appeared as the most suitable person to delve into such a rabid subject.

Before the credits, a boy who goes to school suddenly runs away from something that should not be revealed to the viewer, that a movie like this deserves. This is how R.M.N. starts, where Cristian Mungiu provides us with a devastating portrait of human dishonesty, showing the filth in which we are buried. "We do not know their level of hygiene and the diseases they may have." This is one of the comments included in a film that shows the fears of sharing our increasingly scarce reserves of well-being that economic power and political power give us.

Between documentary and fiction, the endless and tumultuous public meetings in a multi-ethnic town in Transylvania are shown, to which a worker who has left his job in Germany returns to meet his son and also his old girlfriend. Broken families in a country torn to shreds and where the majority of the inhabitants lash out in an inhuman way against other ethnic groups, especially the gypsy. Although they coexist perfectly in this elusive society, the fact that some of them work in baking bread disgusts the majority of citizens. Except for a businesswoman whose ambitions and desires should not be revealed. She states that the hated "are not lepers nor do they have the plague." The film perhaps exceeds its footage, but it is a great exercise in denouncing human falsehood.

The matter has already filled and continues to fill millions of pages of newspapers around the world, privileged spaces in television news and countless reports and documentaries. We are talking, of course, about the Harvey Weinstein case, the film producer who, at a time when the figure of the "tycoon" of the lineage of a Louis B. Mayer or a Jack Warner was already out of date, tried to make it greener from those Miramax offices where his sexual abuse begins.

The Weinstein case was crucial in the awakening of the movement

It went quite (and unfairly) unnoticed, last year, Who do you travel with, a comedy as modest as it is witty and funny. Its author, Martín Cuervo, now presents us with his second feature film, another more than worthy entertainment and with many more characters (there were only four of them) and an appetizing cast of comedians: those mentioned in the tab plus Mariam Hernández, Toni Acosta, Macarena Gómez and Pablo Carbonell, among others. The anecdote is classic: several couples gathered in a mountain hotel closed for the winter after a strong snow storm that left them isolated.

The hotel manager has summoned them because they all celebrated their weddings there and we will soon find out why. And soon the (first?) corpse will also appear. The plot is trivial, but the story works, and very well, thanks to humorous situations in which the dialogues shine (words like Jumanji, Yellowstone, corpse bride or references to toilet paper in the days of confinement lead to magnificent verbal gags) and for the chemistry between the actors and actresses, all in their sauce. By placing it in the context of Spanish comedy, it would be in the traditional area of, for example, "You can be a murderer", by José María Forqué. It's not a bad place.

What's wrong with Tom Hanks? This 2022 will have been an "annus horribilis" for the actor. In Elvis, his portrayal of Colonel Tom Parker, almost buried by makeup, was over the top as hell (although he might get an Oscar nomination for that taste of Hollywood Academy histrionics). His Geppetto under Zemeckis turned out to be completely insipid. And now, under the impersonal baton of Marc Forster, he leads the American remake of the Swedish film A Man Called Ove, directed in 2015 by Hannes Holm and which earned two Oscar nominations.

It is an exact photocopy of the original, even more sentimental and with the didactic aspects (tolerance towards the immigrant neighbor, respect for gender dysphoria, etc.) more underlined. Hanks's character is pure cliché: a sour, sullen and curmudgeonly guy, as well as an inept suicide, who little by little will show that he has a heart as big as seven Titanics. Something of Forrest Gump survives in this Hanks, now without an ounce of charisma. The worst neighbor in the world, in short, is a generous (and tear-jerking) dispenser of good vibes to invigorate viewers who go to the movies like someone who is going to buy carquiñoles.