The tense relationship that the Government and the employers have maintained in recent months is going to be shaken again by the rise in the minimum interprofessional salary (SMI) that the Executive is preparing and that could place it close to the 1,100 euros per month demanded by the unions. 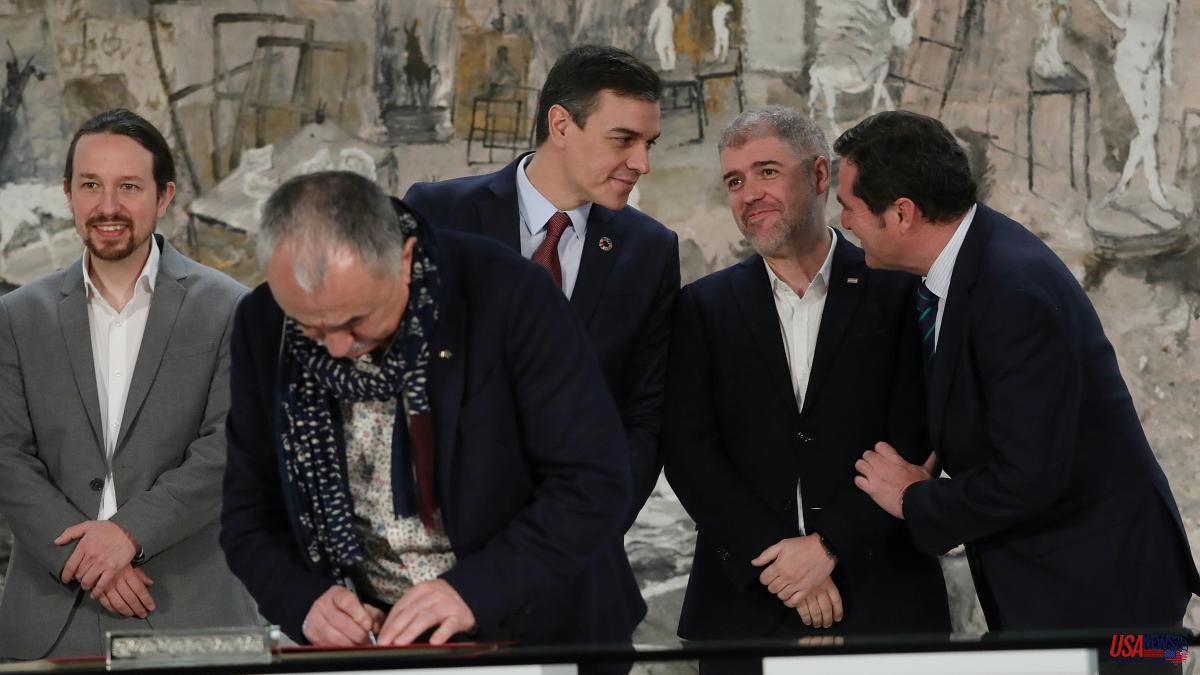 The tense relationship that the Government and the employers have maintained in recent months is going to be shaken again by the rise in the minimum interprofessional salary (SMI) that the Executive is preparing and that could place it close to the 1,100 euros per month demanded by the unions. Although the Ministry of Labor does not want to specify any figure, its insistence that rampant inflation must be taken into account indicates that within the foreseeable range with which it works, between 1,049 and 1,100 euros, it will tend towards the high part.

It is a step that will have the resounding opposition of the CEOE. The employers have already distanced themselves from the last two increases in the SMI, which moved it from 950 to 1,000 euros, which were only carried out with the support of the unions. The consensus achieved in 2020 was buried, when the CEOE did sign up and the President of the Government, Pedro Sánchez, staged it with a photo in Moncloa with all the actors, members of his Executive and the heads of employers and unions .

Now, the bosses are not in consensus mode, even less with elections on the 23rd of this month. Although Antonio Garamendi is practically assured of re-election, and most likely by acclamation, it does not seem like a time for concessions. However, even after the elections, an agreement does not seem within reach.

In this political course, a marked verbal confrontation is coinciding between the Second Vice President and Minister of Labor, Yolanda Díaz, and Antonio Garamendi, with a resounding disagreement also between the employers and the unions on the other salary negotiation, that of the Agreement for Employment and Collective Bargaining (AENC), which is still blocked. Precisely, tomorrow the unions have their big act of the "Salary or conflict" campaign, with a demonstration in Madrid where workers from all over Spain will attend with the aim of forcing the CEOE to return to the negotiating table.

This negotiation is more than difficult, and probably, until inflation is clamped down and with a reliable forecast for the future, businessmen will resist negotiating.

However, the rules are very different when it comes to the SMI. Here, the power belongs to the Government and although the Ministry of Labor always plays the negotiating card, in the end it is up to it to make the final decision, which it can take alone or accompanied.

The increase in the SMI is part of the Government's commitment to end the legislature, taking it to 60% of the average salary. This is assured, but what is missing is to specify what exactly this percentage translates into. To determine this, Yolanda Díaz launched the Advisory Commission for the Analysis of the Interprofessional Minimum Wage on September 2, giving it two and a half months to update its data and propose how much the SMI should rise in 2023. This group of experts continues holding meetings and should have its report ready this month, so that later the dialogue table with unions and employers can be convened in December.

This commission, made up of academics, members of the Government and union representatives, has to update data. His first calculations set 60% of the average salary in a range of between 1,011 and 1,049 euros. However, it was an analysis based on 2018 wages and that logically did not take into account the inflationary spiral of this year. For this reason, in September, Yolanda Díaz commissioned them with two new tasks. One is to update the calculations with the average salaries of 2022 and another, that they take into account inflation. In addition, she also asked them to include the Bank of Spain report on the SMI and its impact on poverty and inequality.

The SMI, which affects nearly two million workers and which establishes the minimum remuneration that an employee must receive, has increased drastically in recent years. It has gone from the 735 euros in which it was located in 2019 to the current 1,000 through several successive increases; the most forceful of which was the first, going from 735 to 900 euros.

SMI aside, another agitated front in salary matters is the AENC negotiation, with the unions showing tomorrow their determination to star in a hot autumn. At the moment, the bosses do not negotiate. Certainly there are sectors that are agreeing, such as the metal industry, which closed an agreement in Barcelona breaking the wage contention line, given that increases of 12% were agreed until 2024. But it is the strategy that the CEOE plays, letting each sector to negotiate on its own, without establishing a general framework. In this sense, Garamendi has made it clear that the AENC is a simple "recommendation" and that you can live without it. The price may be the conflict with which the unions threaten, which pressure to limit the loss of purchasing power of wage earners. They recall that if in the agreements registered this year salaries have risen by 2.6%, the average inflation for the year will be around 8.5%.