The most festive Book Week in Catalan is over

The most festive week. 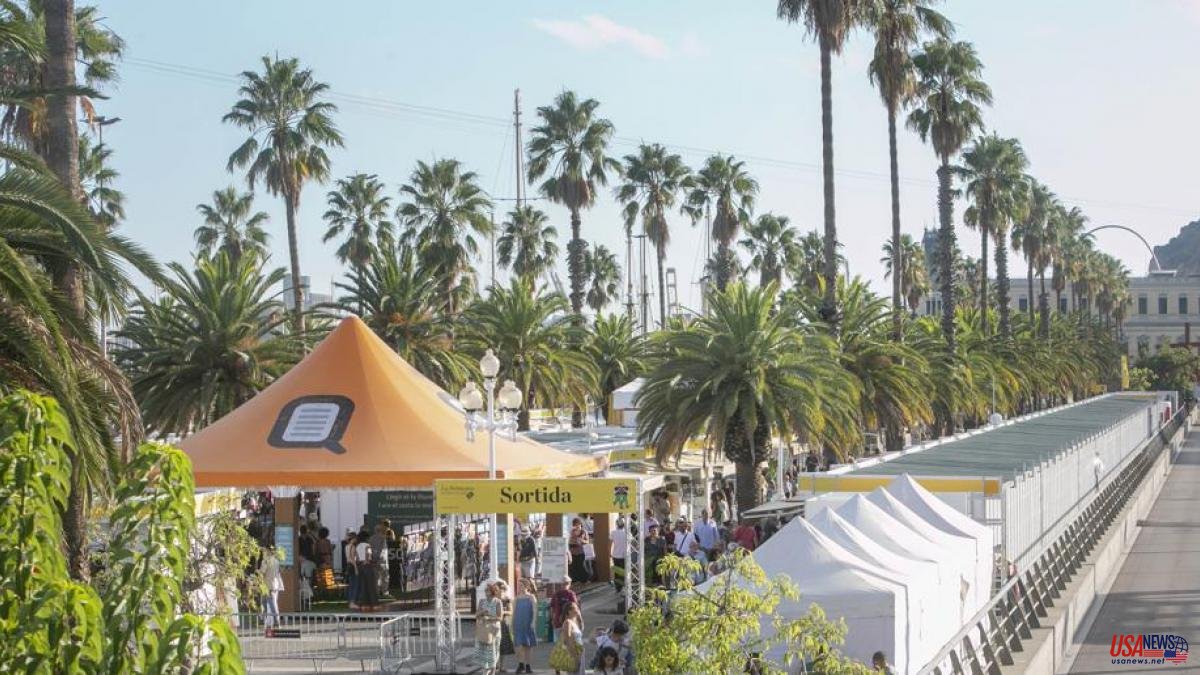 The most festive week. The president of this 40th edition of La Setmana del Llibre en Català, Joan Carles Girbés, a festive Valencian, said it in the closing speech, and he demonstrated it on Saturday night at a closing party with an editorial dance. According to him, his legacy in these three years at the helm of the event is that the festival has been institutionalized and the Difusió award has been established, which this year went to the director of the CCCB, Judit Carrera. But his mandate has also coincided with the professionalization of Setmana precisely in the context of the covid pandemic. That meant first having to change the location of the cathedral to Moll de la Fusta in 2020, when it was reduced to five days with strong restrictions, and the following year the space was maintained with limited capacity.

This year, the 40th edition has been the first in which it was voluntarily decided to stay in the port, it has opened in the morning and the direction of Cristina Domènech, until now coordinator, has been established. Girbés leaves the position in the hands of the president of Editors. cat, Joan Abellà. The move has gone well enough, since on Friday, two days before closing, the barrier of 50,000 visitors to which they aspired, the historical record, had already been surpassed. In addition, the organization estimates that turnover has been over half a million euros, an increase of 20% over last year, with a clear growth in children's and youth books.

The family space has been in fact one of the growth bets in this edition, in which a space for new readers has been enabled and the Open Arms Astral sailboat has been incorporated. Just yesterday, the space was too small for the presentation of the artistic couple Jaume Copons and Liliana Fortuny, creators of the Agus i els monstres i Bitmax de Combel series (to which a new one will be added soon in Comanegra).

The balance is not the same for everyone, there are nuances and also opposing opinions. The vision of the location itself is not unanimous, and if, for example, Jacob Suárez, from the Laertes publishing house, assured that they have never been better, thinking both of the previous location in front of the cathedral and further back in the Ciutadella, for the publisher of Godall , Matilde Martínez, the Moll de la Fusta was a good place during the pandemic, "but it's hard for people to come if they don't expressly do so, which is already being done by the usual wounded writers in bookstores." "Anyway, I am critical, but not negative," she says. The editor of Edicions de 1984, Josep Cots, is also "radically against it, and even more so in this excessive heat", and in his case the volume of sales has seemed "a little weaker than last year". Sidillà's editor, Judit Pujadó, explains that things have gone "a little better than in 2021, but perhaps we shouldn't open every day or every morning." Also, the pier “is bigger but it's not a good place, because you lose part of the public,” he says. For Joan Sala, from Comanegra, "turnover has been very good" and they are very happy, because "we have to grow and it is being done".

From the Muntanya de Llibres de Vic bookstore, which has been bringing the Alpina and Cossetània publishing houses to Setmana for 12 years, Xevi Cortacans affirms that it has sold more, but the mornings have been weak”, and the progress of the course has been very noticeable school, but although he believes that they were better in part in the previous location, "it is difficult to go back, because it has grown a lot, and at the image level it has also improved, now the Setmana is more literary, and we are satisfied". Sara Peralta, who has been at the Pagès Editors stand for the last eight years, sees “a positive evolution, because there is much more space and the cathedral could not grow. This year has seen a very lively sector and there has been a lot of participation”.

Regarding school advancement, some stands have found that it harmed them, but others have the opinion that with foresight it can work well as a school outing. And it is that the opening in the mornings has had defenders and detractors, because although some acts have been carried out that have gone very well, some stands think that by working double they have billed only a little more, and that will have to be taken into account.

Random House editor Joan Riambau is convinced that the increase in activities has turned Setmana into "a meeting space", more than just an open-air store, and growth has been consolidated. From the L’Avenç stand, Núria Iceta is also satisfied, because they had wanted to expand her stand, and they have noticed that the spaciousness to be able to walk around and look at the books calmly has been good for them. In which Adia, Edicions del Buc, Lleonard Muntaner and LaBreu share, they see that there has been improvement, but the mornings have been hard. At the position where La Segona Perifèria is, Miquel Adam is relatively satisfied, although he cannot compare because his project is still a year old. Before picking up, one last sale and one last purchase: going through the respective box, a book sold by Aleix Purcet, from Extinció Edicions, companion d'stand.

Closed on the week. Borja Penalba and Mireia Vives sing the Tribute to Teresa by Ovidi Montllor. Booths are emptied and publishers and booksellers pack up. Ricard Mas, from Males Herbes –they also believe that they have improved, but they have no data–, punctures the car's tire when he goes in to load. You can not have everything.