The Mixed Group will go to court if PP, Cs and Vox prevent the removal of Millán Astray street

The Francoist stamp of the Madrid street map returns to Cibeles. 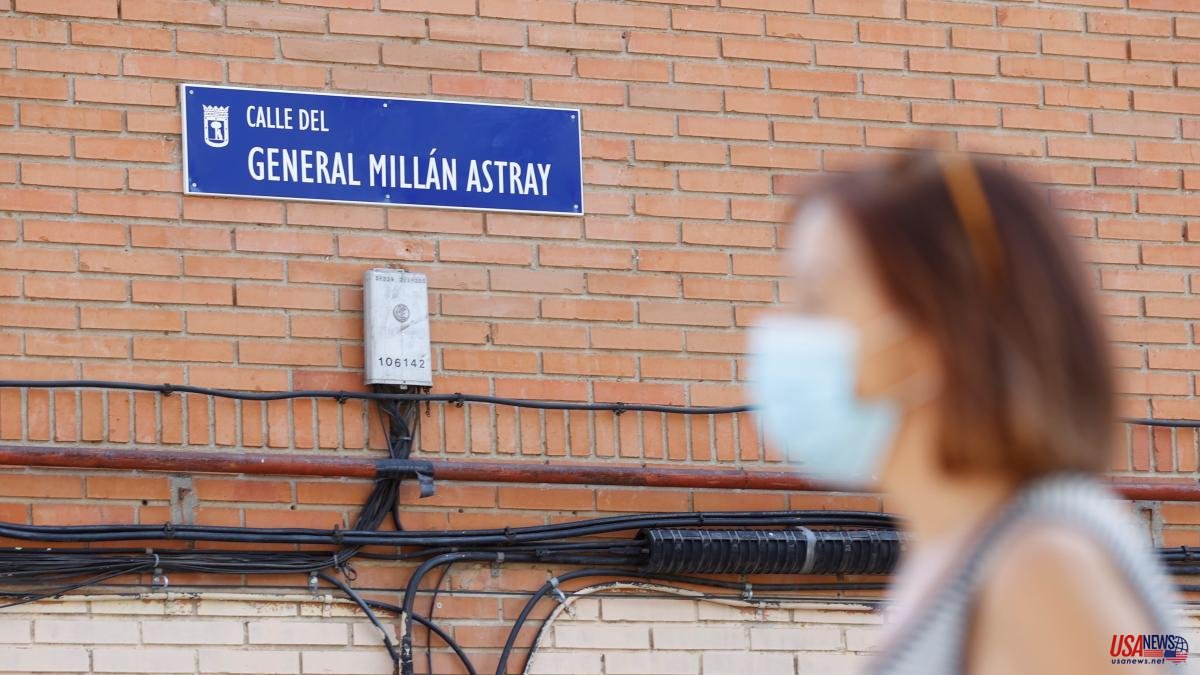 The Francoist stamp of the Madrid street map returns to Cibeles. The Mixed Group, made up of councilors split from Ahora Madrid, announced yesterday its determination to appeal to the courts if the municipal plenary vote 'no' to the change of name of the streets General Millán Astray, Caídos de División Azul and Crucero Baleares in compliance of the Historical Memory Law.

Its spokesman, José Manuel Calvo, considers it "inescapable" to restore the names Justa Freire, Mercedes Formica and Barco Sinaia marked by the Commissioner for Historical Memory and approved in 2017, with Manuela Carmena as mayoress, with the abstention of the PP and the support of Now Madrid, PSOE and Cs. The vote was appealed in court by the associations Plataforma Millán Astray and the Francisco Franco Foundation itself, obtaining a favorable opinion from the Court of Justice of Madrid (TSJM) who ordered the restitution of the original names by arguing, among other things, that "Astray already gave name in 1923 to a square in Madrid" as recognition "for his intervention in the war in the Philippines, for having been the founder of the Spanish Legion, as well as for his wounds in combat".

The current corporation, chaired by José Luis Martínez-Almeida, decided to abide by the TSJM resolution in 2021 regardless of the Memory Law. And with this, he is once again involved in a judicial conflict like the one he starred in in 2020 by agreeing in the municipal plenary session to withdraw the square that commemorated Francisco Largo Caballero, the historic leader of the PSOE and the UGT. After being destroyed with a hammer by municipal workers, a new sentence, in this case from Madrid's Contentious-Administrative Court number 1, challenged that agreement last October.

All this because, according to the ruling, the argument of Vox - who proposed the withdrawal of recognition - was full of "value judgments" and lacked "historical rigor". The contentious-administrative judgment argues over several pages the absence of precise temporal data linking the events attributed to them with the historical milestones covered by the Historical Memory Law, the lack of "documentary evidence" and the "repeated value judgments" provided by the parties that proposed and approved the removal of the plaques.

Almeida, finally, reversed that decision shortly before the summer, complying with a ruling by the Madrid Court of Justice that, regardless of the Memory Law, argues that Astray already had a place in his name in the capital in 1923.

The difficulties that the Memory Law is experiencing in Madrid for its application could grow soon. In this case from the regional level and not municipal. The president of the Community, Isabel Díaz Ayuso, is advancing on a Regional Cultural Heritage Bill that allows shielding the Valley of the Fallen to "defend culture, cultural heritage and also religious symbols in the Community of Madrid , everyone's."

Sources from the Government of Ayuso have explained to La Vanguardia that the future Cultural Heritage Law will make special mention of the protection of the Cruz del Valle de los Caídos, although the decision would be subject to the final opinion of the technicians, who must determine the heritage value of each of the assets to be protected within this category.

The text establishes a new type of heritage called ethnographic. Within it are included "all movable, immovable, intangible property, spaces or elements that constitute significant testimony and expression of the identity, culture and traditional ways of life of the Community".

Based on this description, the Bill includes in its article 73c as ethnographic heritage assets "religious architecture, including traditional calvaries and crosses, as well as decorative elements and movable property directly related to the heritage asset to be protected" .

In this way, as these same sources have indicated, "this mention of the protection of the crosses could be applied to the Cruz del Valle de los Caídos, located in San Lorenzo de El Escorial and managed by National Heritage."