That yesterday there were more than fifty accredited journalists for the visit of Minister Reyes Maroto to the Ford factory in Almussafes already shows the importance that the automotive industry has for the local economy. 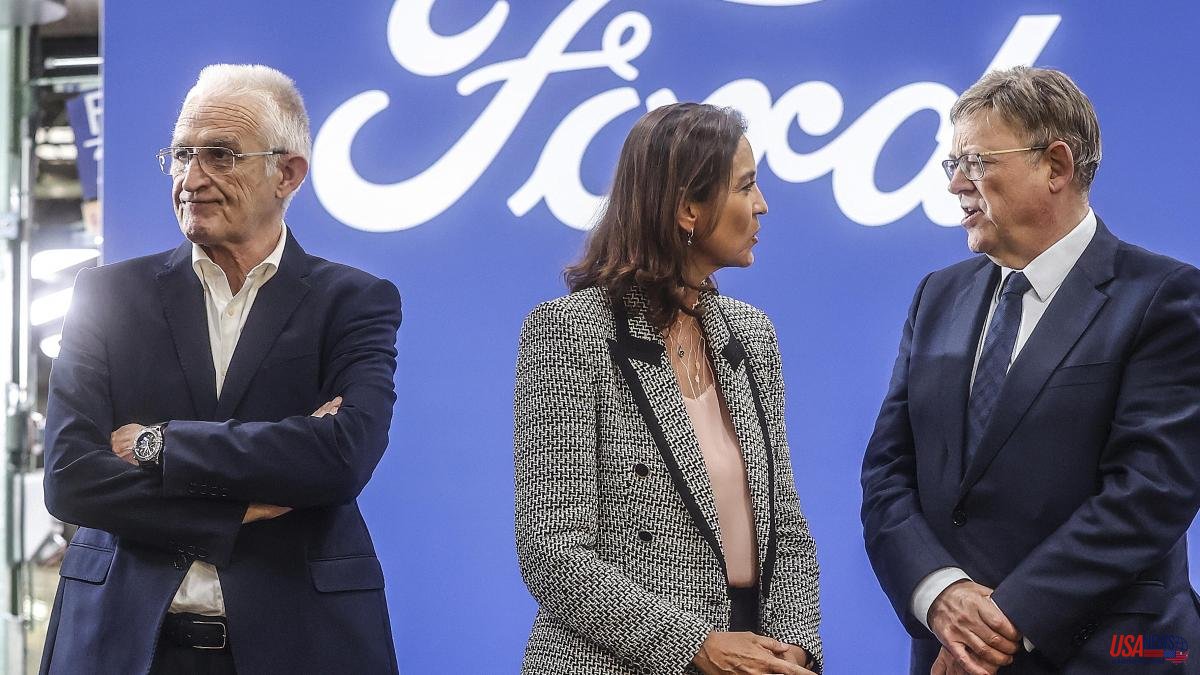 That yesterday there were more than fifty accredited journalists for the visit of Minister Reyes Maroto to the Ford factory in Almussafes already shows the importance that the automotive industry has for the local economy. The visit, in addition to allowing the company to delve into the electrification process that the factory is carrying out, was also a reassuring gesture for the Valencian Administration.

Last week the wake-up call that the multinational Volkswagen put on the financing of the Sagunt gigafactory project made more than one nervous, but this Monday Minister Reyes Maroto assured that she would come to Valencia to provide "certainties". It was her first word to a sea of ​​microphones and mobile phones at Ford's vehicle plant, where employees eagerly drove models of the Ford Kuga produced at its facility.

“I want to give certainty in relation to investments; We have already allocated very important funds that we will announce tomorrow regarding this tractor project”, announced the minister, who recalled that the global data of the PERTE of the electric vehicle amounts to 877 million euros.

How many of these will remain in the Sagunt battery factory is what will be announced today, although Maroto has already announced that the amount "far exceeds the provisional resolution we made." To the rest, the head of Industry stated that "we have been working for a long time and the Government is going to be up to the task", to which she added that we are going to reinforce investments so that the gigafactory and the set of investments that Volkswagen has committed to PERTE are up to their needs”.

A message of calm and commitment to the project that will be erected in the Valencian Community that Minister Félix Bolaños had also transferred to President Ximo Puig, visiting Valencia last Sunday. "I am absolutely convinced that this project, important for Spain and the Valencian Community, will go forward, but I understand all the perspectives and each one defends their interests", said the head of the Consell.

Without forgetting the importance of PERTE in terms of the investments that the gigafactory needs, Puig yesterday clarified that yesterday's day was a "very important day", recovering "the milestone" celebrated this year after learning that Almussafes won the fight against the German of Saarlouis in the assignment of the electric platform in Europe, of which the assigned models are still unknown.

In this sense, Ford had made progress in the meeting with Minister Maroto and President Puig, which will be in 2026 when the exclusive line of electric vehicles will be launched.

“There is trust and it is from the union that success is born. There is unity of action to ensure that Ford Almussafes has many years of life”, sentenced the head of the Consell. “For us, keeping Ford in the Valencian Community was essential”, he reiterated.

Dionisio Campos, manufacturing director of Ford Spain, spoke about this future, who explained that it will be in 2023 when the company sits down with the unions to negotiate the templates before electrification.

The objective will be "to see what alternatives we have so that this transformation of the business is bearable for all parties," said Campos, who was accompanied by Matthew Godlewski, vice president of International Government Affairs of Ford Motor Company and by Jesús Alonso, president and CEO of Ford Iberia.