The ruling military junta in Chad and several armed opposition groups in that country signed a peace agreement in Qatar on Monday that paves the way for a national dialogue later this month and presidential elections in the African country, reported the official Qatari news agency, QNA. 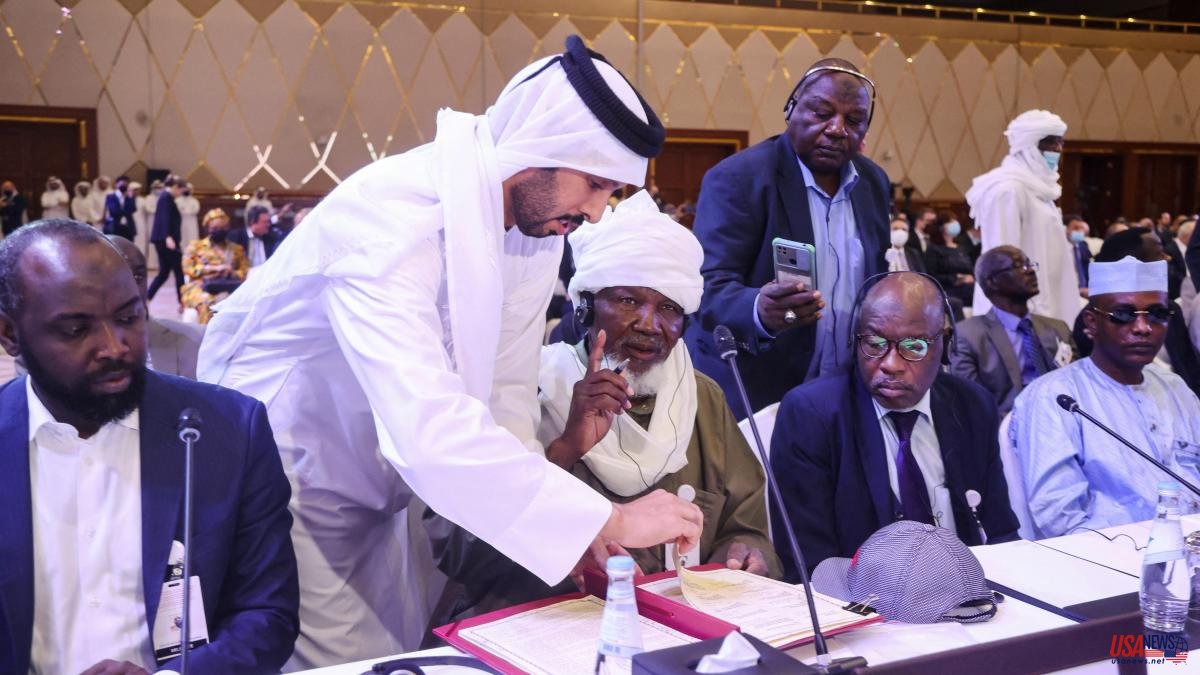 The ruling military junta in Chad and several armed opposition groups in that country signed a peace agreement in Qatar on Monday that paves the way for a national dialogue later this month and presidential elections in the African country, reported the official Qatari news agency, QNA.

After months of negotiations in Doha, more than 40 rebel groups pledged to lay down their arms and avoid military action for political or ethnic reasons inside and outside the country, agreed to form a government of national reconciliation and a committee to oversee reform of the Constitution and the Army, according to official Qatari sources. A source familiar with the deal said Chad's interim military government is also committed not to launch military or police operations in neighboring countries against groups that signed the deal.

They also agree to participate in the national dialogue, sponsored by Qatar and organized by the Transitional Military Council (CMT), chaired by Mahamat Idriss Déby, in power since the death of his father Idriss Déby was announced in April last year. who had ruled the country for 30 years.

"Constructive dialogue is the only means to achieve the aspirations of the Chadian people," said the Qatari Foreign Minister, Mohamed bin Abderrahman al Thani, who asked the "other (armed) groups" to adhere to the agreement "for a comprehensive reconciliation" .

The agreement, the result of negotiations that began in Doha last March, was not signed by some armed movements, which could lead to insufficient guarantees for the success of the national dialogue scheduled for August 20 in N'Djamena.

Among them is the Front for Change and Concord in Chad (FACT), a Libya-based rebel group that claims responsibility for the murder of Idriss Déby. They withdrew from the negotiations because the agreement did not take into account the group's demands, which included the release of prisoners captured during the fighting, although it says it is open to dialogue.

The ceremony was attended by representatives of the African Union, the European Union and the United Nations, whose presence "constitutes a guarantee" for the success of the so-called "Doha peace agreement", according to the spokesman for the Qatari Foreign Ministry, Mayed al Ansari. , to the Qatari television channel Al Jazeera.

Al Ansari assured that 43 Chadian political groups and armed factions had signed the Doha pact with the Military Junta, and explained that the national dialogue on the 20th in N'Djamena "will already be a matter for the Transitional Council", although -he affirmed- "Qatar will continue with its work in sponsoring the negotiations".

The political-military leaders of the Rome Group, the Doha Group and the National Coordinator for Change and Reform (CNCR) also condemned in a joint statement the "almost total absence" of a plenary session and, therefore, of debates between them and the Government delegation.

Chad has been under the power of the CMT since President Idriss Déby Itno - who had ruled the country since 1990 - died in April 2021 during violent clashes between rebels and the Chadian Army.

After taking power, the transitional government annulled the constitution and dissolved the government and parliament, although it promised to hold free and democratic elections, after a national dialogue, within 18 months.

From the beginning, the leader of the CMT has had the support of the international community, led by France, the European Union and the African Union, since the Chadian Army is one of the pillars of the war against jihadist groups in the sahel region