The most absolute silence reigned this Saturday afternoon in the border perimeter of Barrio Chino de Melilla. 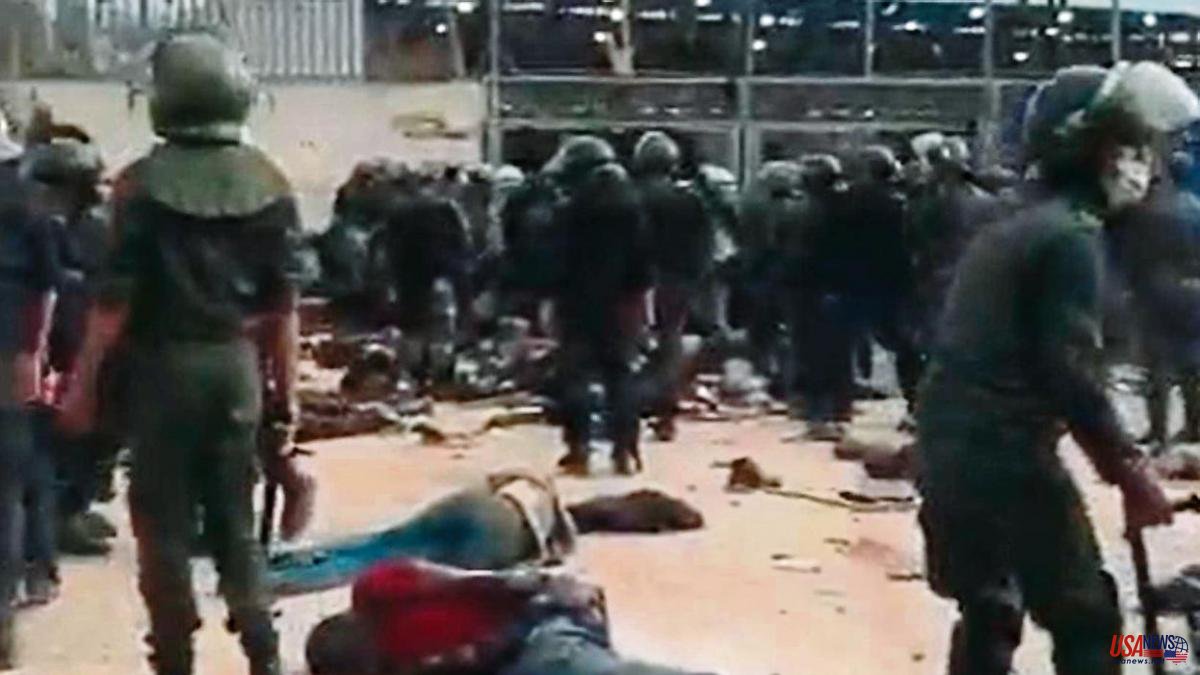 The most absolute silence reigned this Saturday afternoon in the border perimeter of Barrio Chino de Melilla. Among the conglomeration of several lines of fences and wires on the Moroccan side, you could still see the torn clothes and mismatched shoes that the 400 migrants who managed to reach that point on Friday morning lost their way trying to cross. Last night the death toll still varied among the 23 migrants admitted by the Moroccan authorities after 10:00 p.m. (Spanish peninsular time) and the 37 that encrypted different NGOs that work on the other side of the border and that assured that at least two Moroccan gendarmes were among the deceased. A fact that the Rabat regime categorically denied. The 133 men who managed to reach Spanish territory, mostly from Sudan and some from Chad, confirmed on Saturday to the workers and health workers of the Temporary Immigrant Stay Center of Melilla (CETI), that they had been in the mountains for more than a month of Nador, mainly in Gurugú, planning the jump.

In the last month, around 2,000 sub-Saharans had concentrated in those mountains on the outskirts of Nador, about 30 kilometers from the fence with Melilla, who already last week made several attempts to approach the perimeter that were harshly aborted by the forces Moroccan security.

Confusion still reigned in Melilla on Saturday, despite the hours that had elapsed after the tragedy, of a magnitude that is not remembered in the autonomous city. The Civil Guard received a notice at 6:40 in the morning from the Moroccan Gendarmerie warning of the attempted massive assault. Two hours later, around half past eight, some 1,500 men gathered at the closed passage of Chinatown, of which only 133 managed to cross. In Melilla, if one thing was clear this Saturday, it was that a column of 1,500 men did not cover the distance in kilometers that separated them to the fence without drawing the attention of the Gendarmerie, who waited until they were next to the fence to be used with disproportionate violence. against migrants, as can be seen in several videos broadcast by NGOs.

Friday's was the first massive assault since Morocco obtained in March from Pedro Sánchez the letter in which the president tilted the balance towards the Moroccan autonomy proposal for Western Sahara to the detriment of the self-determination referendum historically claimed by the Polisario Front with the approval of Algeria. A new scenario that in the eyes of international analysts should serve to shield the borders from irregular immigration.

The Moroccan Association of Human Rights (AMDH) with a long history in defense of migrants and the one with the greatest presence in the neighboring country, led this Saturday the signing of a statement with several associations such as the Spanish one Caminando Fronteras or Attac Maroc in which They demanded several independent investigations, on both sides of the fence, and another at the international level to clarify the tragedy. In that same statement, it was requested not to bury the deceased so that the investigators could work on the causes. The little that the Moroccan authorities told is that most of the victims died of suffocation during the avalanche that occurred in a small ditch excavated before the double fence. A kind of moat to make it difficult to reach the perimeter and which served as a grave for an as yet undefined number of migrants. Others died when they fell from the ten and fifteen meters of height of some sections of the wire.

Along the same lines as the onegés, Podemos regretted what happened and demanded an “immediate and independent” investigation from the European Union to clarify the facts and “purify responsibilities”. "Going over international law by selling, among others, the rights of the Saharawi people and trusting governments that systematically violate human rights, has consequences," the party's International Secretariat said in a statement, alluding to the PSOE's turn regarding the Occidental Sahara.

And oblivious to criticism, just as he did on Friday from Brussels, when the dimension of the tragedy was not yet known, the President of the Government, Pedro Sánchez, supported this Saturday from Moncloa both the work of the Moroccan Gendarmerie and that of the bodies and state security forces. Although he went a little further and denounced those who, in his opinion, are the only ones responsible for this dramatic episode: the mafias that traffic in human beings.