The marathon, for Tamirat Tola; Ethiopia keeps its distance

At km 35, Tamirat Tola (30) looks from one side to the other and notices that his fellow travelers are having problems. 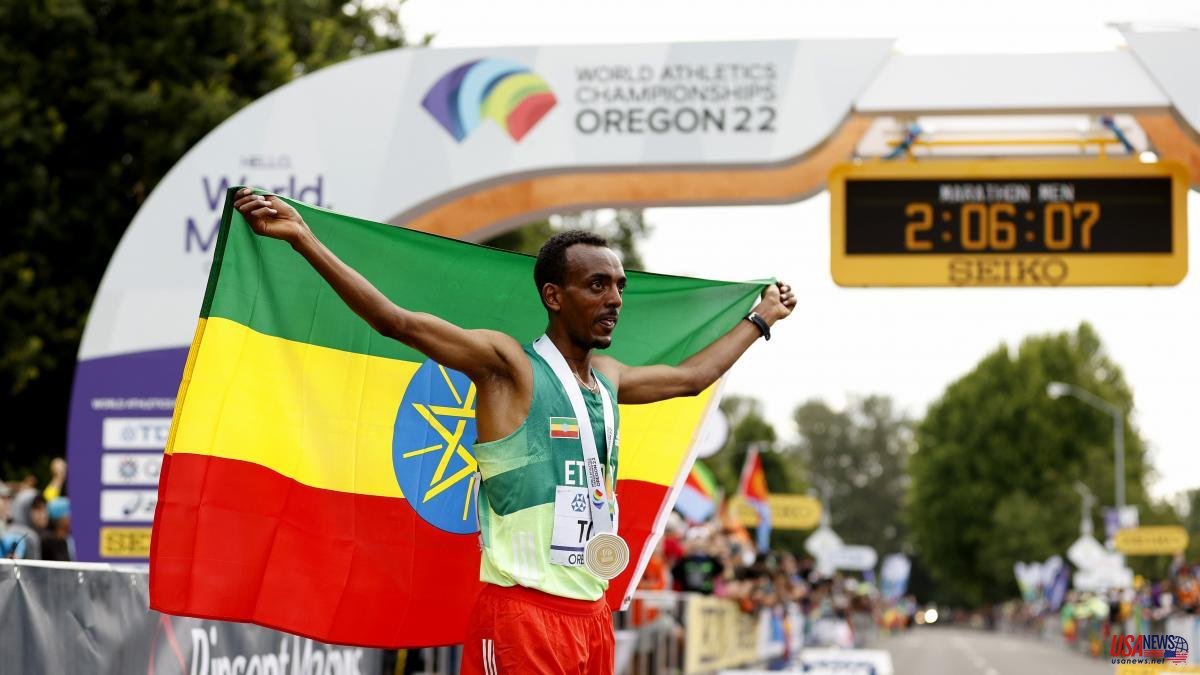 At km 35, Tamirat Tola (30) looks from one side to the other and notices that his fellow travelers are having problems.

He feels strong, he has resources and a resume (he was bronze at the Rio 2016 Games and silver at the London 2017 World Cups), he stretches his stride.

The Ethiopian appreciates the moment.

The wind is not blowing, the temperature is around 16ºC, he is jogging between beautiful green parks, in the lands of Steve Prefontaine, a long-distance icon in the country of jogging.

(those same parks that he has been visiting in his last sunrises in Eugene: the famous morning run, dozens of figures in tracksuits, red pants and green jackets, who passed each other, and from the corner of their eyes they scrutinized each other, with the red uniforms of the Kenyans and the yellows of the Ugandans, fascinating miscellany of colors at dawn in those forests)

His legs respond, the rivals shudder, they let him go.

Geremew (Ethiopian like Tola), Bashir Abdi (Belgian of Somali origin who had won bronze at last year's Games), the great Geoffrey Kamworor, a Kenyan and training partner of Eliud Kipchoge in the highlands of Eldoret, who has not shot since That traffic accident, two years ago...

They all dismount and see how Tola walks off, skinny and now fast, who marks partial times of 2m50s (61m26s the second half marathon) and floats on the asphalt and opens a margin of 45s, enough to be crowned world champion of the marathon, gold finally, not silver or bronze, in 2h05m36s, and defend the title for Ethiopia (in 2019 Lelisa Desisa had won, this time off the hook from km 20, who retired at 29).

Geremew is silver and Abdi, bronze.

From a distance, he watches the medals slip away from him and so does Canada's Cam Levins, a former training partner of Mo Farah, Galen Rupp - who finished 19th in Eugene - and Matt Centrowitz in the Nike Oregon Project (NOP).

Lovers of athletics will remember those times, those of the NOP, the controversial group that had created the now plagued Alberto Salazar, expelled from athletics for his illegal doping practices.