The 81st Madrid Book Fair closes this Sunday after seventeen days of celebration in the Retiro Park, an edition in which it has exceeded its records for turnover and sale of copies of 2019, the last year before the pandemic, in the ten million euros were raised. 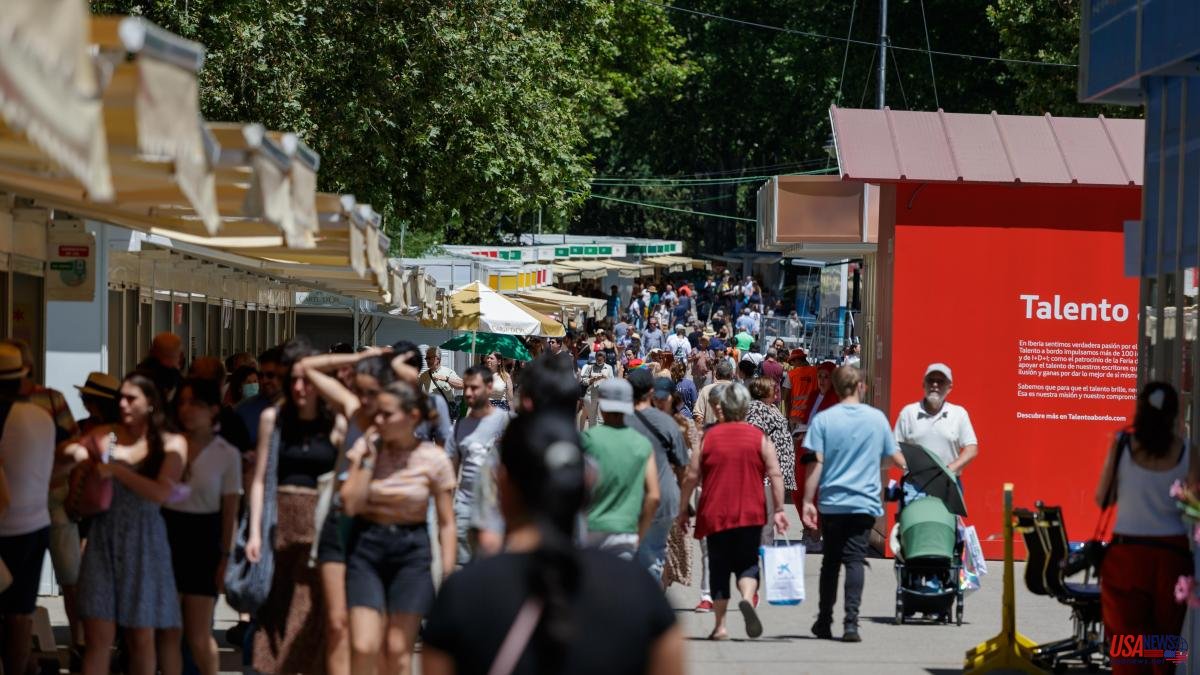 The 81st Madrid Book Fair closes this Sunday after seventeen days of celebration in the Retiro Park, an edition in which it has exceeded its records for turnover and sale of copies of 2019, the last year before the pandemic, in the ten million euros were raised.

Although the specific figures will take a few days to be known, the director of the Madrid Book Fair, Eva Orúe, assures that there will be a slight increase in sales compared to 2019, which was the best year in the history of the fair so far.

"We hope that the final figures ratify this, which is right now a sensation collected from the first estimates that are beginning to reach us," Orúe confides about this edition, in which she has made her debut as director.

In 2019, some ten million euros were collected, some 550,000 publications were sold and the number of visits was around 2,300,000 people. Then the pandemic came and in 2020 it had to be held online and in 2021 it was delayed until the fall and held with capacity restrictions. It has been an "extraordinary" fair in terms of public attendance, "participation, media interest and involvement of booksellers, publishers and distributors", says its director.

In addition to seeing their expectations "more than met", the Fair has confirmed "a greater diversification in terms of the preferences of readers". Narrative is still the genre that tops the best-selling lists "but the novelty of 2022 is the firm commitment to independent publishing."

Although the profile of visitors to the Madrid Book Fair does not coincide one hundred percent with those who visit bookshops the rest of the year, the books belonging to lesser-known stamp catalogs have found their own recipients, in clear competition with the more commercial literature.

As a first approximation to the definitive data, the organization has confirmed that the sales success of the first weekend, estimated at around 10 percent compared to 2019, has become a trend.

However, the good progress of sales has been clouded by the adverse weather conditions last Saturday, which forced them to close before the usual time and cancel signing sessions that attract a large public.

The greater influx of people on weekdays compared to previous editions has also been a trend, which translates "into better sales for exhibitors whose background is aimed at a more demanding public."

Another verifiable fact is the relationship between the books signed by the authors who have gathered at the Retreat and their replacement in the bookstore booths. Both data have gone in parallel, they have pointed out.

The director of the Madrid Book Fair, Eva Orúe, has pointed to three factors that justify the success of this edition. On the one hand, that after two years of difficulties it has been possible to recover a certain normality so that the exhibitors meet again with the reading public.

Secondly, the good functioning of the new signing spaces with which the central part of the Paseo de Coches has been decongested. "The organization's effort to attract a young audience and organize the long queues has given good results. We created four strategic spaces for those firms that could cause more influx of visitors and thus maintain the route of the Fair with adequate traffic", has sustained.

And, finally, the programming focused on promoting "two objectives that are sometimes not in the forefront, such as the promotion of reading and writing in early ages".

With its programming, the Fair has managed to attract more young audiences in this edition, which would justify the success of youth literature sales this year. The fact of having chosen an artist with thousands of followers among young people, such as cartoonist Isaac Sánchez, to illustrate the 2022 poster "may explain the great expectation aroused, both in his community and in all those related to comics."

This art has also been very present in this edition because there have been numerous spaces for debate that have been dedicated to it, especially during the last few days and, specifically, today, Sunday.