The long footprint of Roman Hispania 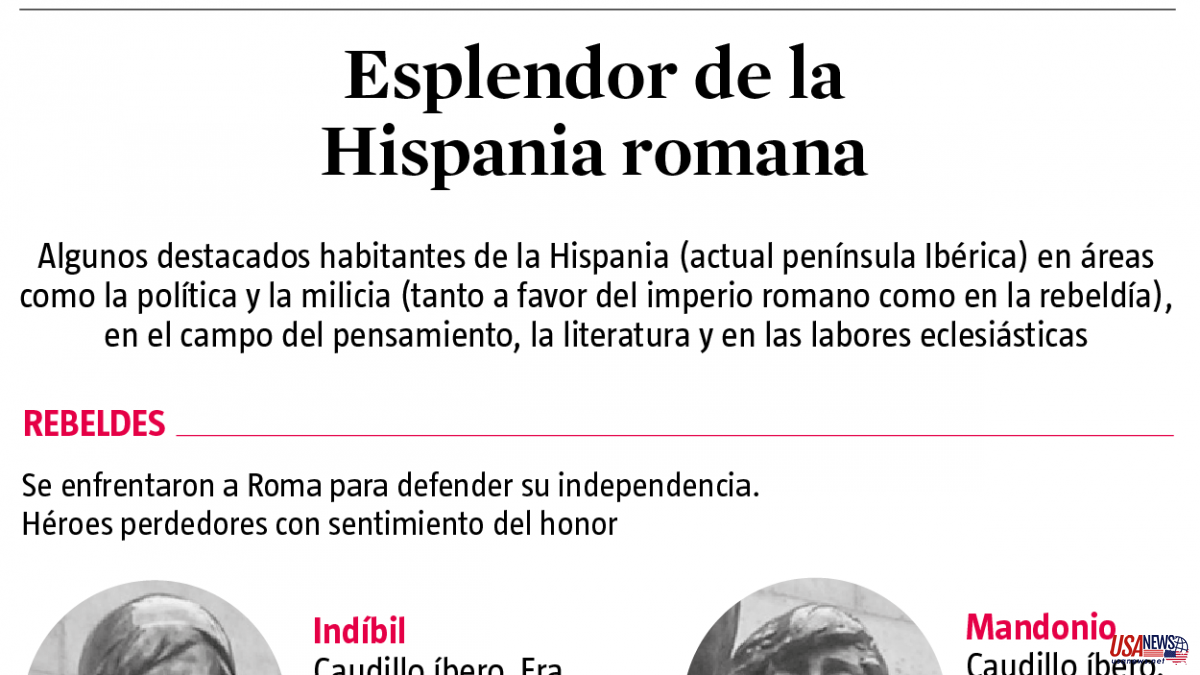 Emperors, bishops, heretics, guerrilla fighters, philosophers, poets... the contribution of the inhabitants of Hispania (the current Iberian Peninsula) to the Roman Empire was notable and, despite the centuries that have passed, their traces still arrive, with various editorial novelties recent dealing with them. The philosopher Carlos Goñi (Pamplona, ​​1963) has just published Hispanos an essay that succinctly reviews some of the most outstanding biographies and attempts to establish common features between them.

Goñi – who attends this newspaper by telephone from Lleida – has used a strictly chronological criterion to consider any person Hispanic “since the Romans set foot on the peninsula in 218 BC”, which makes him include the rebels who they stood against the invader for two centuries. He clarifies that we speak "of a geographical location, since there was no national feeling as it is understood today." Hispania, yes, "was very rich, the westernmost part of the world, a bit like America in the 16th century, the place where the Romans got gold, silver, wheat..."

That is why the British Jerry Toner, a professor at Churchill College in the University of Cambridge, draws it as an exuberant barn when his character Marco Sidonio Falco stops by in A Guide to Traveling the Roman Empire (Criticism, to be published next October 11), showing "how gold is extracted" and the prestige of "the good horses of that province".

For his part, the novelist Santiago Posteguillo (Valencia, 1967) has placed several of his works in various parts of Hispania, and has even given the leading role to some of his children, such as the emperor Trajan (53-117 AD), born in Itálica (in the current Sevillian town of Santiponce) and protagonist of the trilogy that makes up The Emperor's Assassins, Circus Maximus and The Lost Legion.

Posteguillo recalls – also by phone, from Valencia – that “the Celtiberian was greatly romanized, to the point that we gave great characters to Roman civilization, three emperors (Trajan, Hadrian and Theodosius), philosophers like Seneca, poets like Martial... We were among those who most resisted Rome, but then it could almost be said that we were more Roman than the Romans”.

Among the resistant, Goñi's essay begins with Indíbil and Mandonio, who have a statue in Lleida, and even includes Hannibal who, although a Carthaginian, spent most of his life in Hispania, which he crossed with his 37 war elephants. “The enemy was the foreigner – he points out –, who wanted to steal their lifestyle and their independence. The rebels (Ilergetes, Astures, Cantabria...) lost even though they left us a positive and heroic image of that defeat”.

Two key elements are the guerrillas (Rome never faced an army on the peninsula) and the heroic resistance of some cities (which we still call Numantine today, precisely because of Numancia). In Calagurris (present-day Calahorra, in La Rioja), as Posteguillo recalls, "he put up with cannibalism". "If the Hispanics had had an army, they would have been Romans in a few years, since Rome would have won easily," says Goñi, for whom "the great virtue of Hispania was its plurality or fragmentation." The Roman army also took advantage of the qualities of the Celtiberian warriors, Posteguillo continues, "the Asturian cavalry being famous, which I describe in my novel Y Julia challenged the gods, they were very effective warriors, accustomed to rain and fog." Goñi even defends that Goscinny and Uderzo were inspired by Hispanic villages to create the town of the irreducible Gauls of Asterix, "although, being French authors, they moved it to Gaul but, historically, it is clear that the inspiration came from more than south".

Pastor Viriato, a Lusitanian, held the Romans in check for almost ten years. “The imaginary of his mythologized guerrilla life in the mountains persists, from which, many centuries later, characters such as the bandit Curro Jiménez come,” says Goñi. Viriato was assassinated at the hands of three friends, who, according to legend, when they went to collect what was promised, received in response a phrase still in use: "Rome does not pay traitors."

Such was the difficulty of dominating Hispania, says Goñi, "that the Romans had to change the date of appointment of consuls: before it was held on the Ides of March but, before the war, they passed them to the calends of January, and now kept it that way. In this way, today we start the year in January, thanks to the Hispanics”.

Goñi even documents who was “the first Hispanic Cynic, the Cantabrian Corocotta, on whose head Emperor Augustus had put a price (200,000 sesterces). What did he do? He presented himself to claim the reward. He amused Augustus so much that he spared his life.”

Trajan is still considered by some to be the best emperor Rome had, a good reputation that began to be built in the Middle Ages. “He used to say – Goñi points out – that he treated everyone as he would like the emperor to treat him. He was folksy, a close emperor who cared about the people, for example creating an institution to help orphans, that style is still identified today as good government”.

Despite the great differences with his successor, his countryman Adriano, Posteguillo points out a common trait: “Both traveled a lot, the first conquering and the second touring places. I see there an element that later fits with the fact that it was the Hispanics who discovered the New World.” Of Hadrian, Goñi also highlights the story of his young lover Antinous, "who drowned in the Nile, which destroyed the emperor, who deified him, had temples built in his honor."

Regarding thought, Posteguillo and Goñi agree that Hispanic philosophy combines two opposites, stoicism and hedonism. Seneca the Elder (a stranger next to his son) embodies Stoicism but "Hispanic philosophy is Stoic without being severe and hedonistic without being voluptuous", says Goñi, for whom "just as we mix wine with water so that we are not go to our heads, we also mix ideas with practice, for the same reason”.

The great philosopher is Seneca the Younger, three times sentenced to death, first by Caligula, then by Claudius and, finally, by Nero, from whom he could no longer escape, so he ended up cutting his wrists in compliance with the sentence. "It's not very Hispanic to take one's life," objects Goñi, "risking it, yes, but not despising it that way."

In the literary field, poets flourished. Lucano, Andalusian, "forces the metaphor until it becomes an exaggeration", in the words of Goñi. Marcial is considered a tweeter of the time, thanks to his epigrams, thanks to which "we know the vices and virtues of the Romans, he crystallized the daily life of his time, the first century, in a scathing and grotesque way ”. Juvenco and Merobaudes are, in turn, Christian poets. The first rewrote the Gospels in verse, imitating the Aeneid, but with Jesus Christ as the hero. “Hyginus, the Palatine librarian, was a Levantine, and he influenced Heidegger's Being and Time. For him, the sky is a poem written with stars, so he carries out an astronomical study and explains it mythologically. He observed on the moon a slot or crater in the shape of a snake, about 200 km, which is currently called after him, Higinio ".

Religious characters deserve a separate chapter, both those who respect official Christianity and heretics. Among the latter, the Galician bishop Prisciliano, who, according to Goñi, "simply wanted to live the faith in his own way, mixed groups of men and women met to fast and pray, who maintained a very strict chastity, but their detractors accused them of of dualists, of reading books that were not in the canon… he was executed and venerated as a martyr.”

Paciano, Bishop of Barcelona, ​​delivered a homily to denounce the debauchery of the New Year's festivities, although his criticism did not make a dent in the unruly parishioners.

Posteguillo also points out “a not so well known fact: when Sertorio took refuge in Hispania with his troops to maintain the fight of the popular against the optimates. He allied himself with the Iberians and founded a senate in Huesca mixing Romans with Celtiberians, which won him great support. It was a very interesting moment of fusion between Rome and Celtiberia”.

The trickle of titles on the subject is constant. Some of the most recent are Ciudades de la Bética (Fundación Lara) by José Eslava Galán; Romans from here (La Esfera) by Paco Álvarez; The history of Roman Hispania in 50 places (Cydonia) by Javier Ramos; The Twilight of the Gods in Hispania (CSIC) by José Carlos López-Gómez; The sea and the conquest of Hispania (Marcial Pons) by Sabino Perea Yébenes; o Army and soldiers of Rome. Epigraphy and territory in the High Imperial Hispania Citerior (CSIC) by Javier Moralejo; .