The Lewandowski symptom at Barça

Minutes before the derby Robert Lewandowski offered the public at the Spotify Camp Nou the Golden Boot that he won in the 2021-22 season (with Bayern, yes). 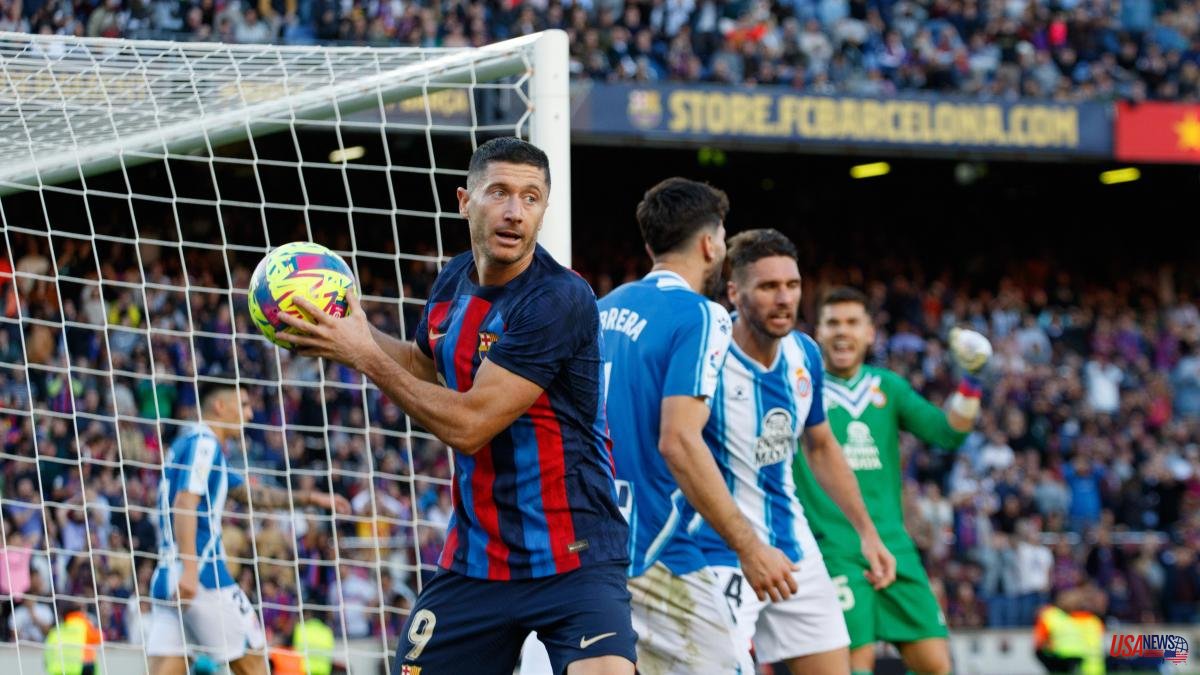 Minutes before the derby Robert Lewandowski offered the public at the Spotify Camp Nou the Golden Boot that he won in the 2021-22 season (with Bayern, yes). It happens that these small ceremonies are usually killjoys. It was exactly what happened to the Polish striker and Barcelona. The blaugrana could not beat Espanyol (1-1) in the last game of the year despite going ahead very early on the scoreboard and Lewandowski was left without celebrating.

The presence of the pichichi in the Barcelona duel, sponsored by a court that granted him the precautionary measure, marked the previous meeting. And Barça's dependence on its star is one of the issues that leaves the tables for the internal analysis of a leader, who has lost the advantage he had with Madrid, now tied at 38 points with 23 games to play.

Xavi's team has a hard time winning the games without the help and participation of his number 9. He came back to light before the parrots. It is something that was seen in the pre-World Cup phase and that has not been reintroduced after the break for the World Cup in Qatar. “The draw is our fault. We have not sentenced the game. And when you forgive so many arrivals and you are not effective, we already know what happens. It's the same movie as always", acknowledged Xavi Hernández in the press room.

The Egarense coach is aware of the influence of his striker, to the point that despite spending several days training a game plan without Lewandowski, he did not hesitate to backtrack to re-insert the striker as a reference in the attack as soon as he learned that I could count on him.

The story could have been totally different if the Pole, who intervened in Marcos Alonso's 1-0 draw with a header that came from an assist rather than a shot, had hit the mark in the 88th minute in his face-to-face with Álvaro Fernández. After a play by Balde, Lewandowski shot with his left foot to hit the blue and white goalkeeper under the legs. However, the ball hit both legs of Fernández, who kept the ball to avoid making it 2-1.

With a game that is at times sleepy, at others hasty and always with very little continuity, the 34-year-old former Bayern striker has become a symptom of the Barcelona moment. If he is successful, the blaugrana seem on the right path to recovery. The sample is the 11 games in which Lewandowski has seen the door. Barcelona have won 10 and only drew one (3-3 at home against Inter that left them with a foot and a half out of the Champions League). His targets are a guarantee.

On the other hand, his record and solvency plummet if he does not have the inspiration of his finisher. Without his aim he stagnates. The derby was the sixth game of the 10 in which the Pole has not made a place for himself on the scoreboard that he cannot win: four defeats (Bernabeu, San Siro and the double crossing with Bayern) and two draws. Yes, they beat Celta, Viktoria Pilsen (Lewandowski did not travel), Almería (he missed a penalty) and Osasuna (he was sent off after half an hour). In those ten games in which the forward did not contribute, only in one has the team scored more than two goals. And it was in the inconsequential meeting in Pilsen.

This problem increases coinciding with the bad run that the Pole is going through in front of goal (three dry games) and it is something that will have to be remedied if he ends up serving the three-game league ban that hangs over him after the red in Pamplona. It remains to be seen if Xavi decides to take him or not to Alicante for the Cup.

At the moment, none of Barcelona's last nine goals have been signed by Lewandowski. His last goal was at Mestalla back on October 29 and it was worth it for the blaugrana to take the three points from Valencia (0-1) in 93. However, a little more help is needed from the other attackers.

Against Espanyol, Raphinha was substituted again for the ninth time this season. Ansu Fati started in the derby but is still in an existential process. “He has trained very well this week. He has been extraordinary in defensive work. He has lacked effectiveness, but just like the rest. He will be more successful in the next game, ”Xavi apologized. The entries of Ferran Torres (three of his five goals went to the weak Viktoria) and Dembélé did not change at the ends. And Memphis saw it from the bench. The five forwards have 16 goals, two less than Lewandowski, which has become a symptom after having been a solution in many sections of the course.