The electoral campaign in Andalusia has not yet begun when the President of the Junta, Juanma Moreno, has confirmed that he is considering the possibility of repeating the elections in case he does not obtain a “sufficient majority” that allows him to govern without being subject to the conditions of other political formations, in this case those that Vox would impose, a party on which his permanence in San Telmo would depend according to the polls. 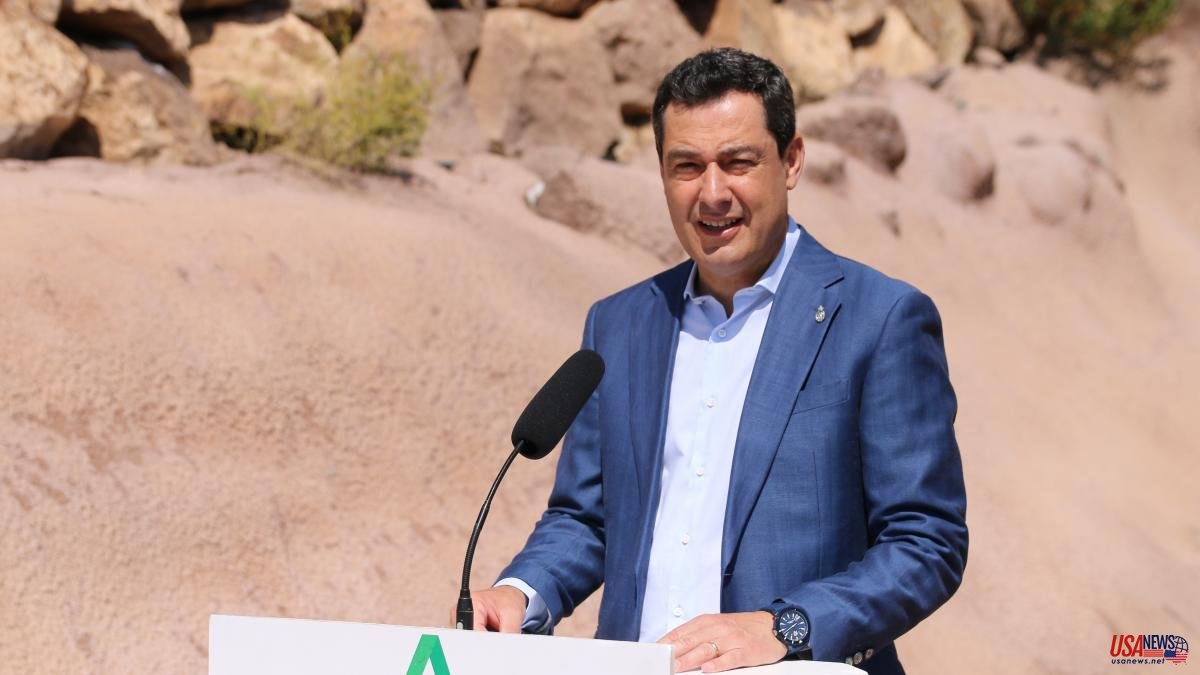 The electoral campaign in Andalusia has not yet begun when the President of the Junta, Juanma Moreno, has confirmed that he is considering the possibility of repeating the elections in case he does not obtain a “sufficient majority” that allows him to govern without being subject to the conditions of other political formations, in this case those that Vox would impose, a party on which his permanence in San Telmo would depend according to the polls.

The latest barometer carried out by Key Data for Público predicts a wide advantage for the PP-A, which would obtain 46 seats, in the absence of 9 to obtain the absolute in Parliament (whose cut is established at 55 representatives. It would be a relatively good figure for the popular ones, surpassing by 20 the deputies achieved in the 2018 elections, and marking a distance of 13 seats with respect to the PSOE, which would keep the same representation as then, 33 deputies.

The third political force would be Vox, which would obtain significant support from the citizens, far exceeding the 12 seats achieved in the previous elections, going on to occupy 20 seats on the next 19-J. This supposed support for the ultra-nationalists would put Moreno in a bind who, despite adding more votes than the leftists combined, would have to reach an agreement with Macarena Olona (Vox), since his investiture alone seems unfeasible . Ciudadanos would stay at 0, and its voters would be dispersed among the forces of the right.

“If there is no agreement on the part of the political formations, then, in the end, we could be forced to go to a repetition of elections”, commented the popular leader in an interview granted to El Confidencial, “it is not desirable, it is not what I want is not reasonable”, he clarified, however, this possibility is already on the table.

In less than 24 hours, reactions to this dilemma have cascaded across the game board. There are those who interpret these words of the president as a clear sign of "weakness". This was expressed by the leader of the PSOE-A, Juan Espadas, and the candidate for the Junta por Adelante Andalucía, Teresa Rodríguez.

“There will be no second elections”, sentenced the Sevillian socialist, who assumes that “if Andalusians vote massively for the best of Andalusia, the PSOE will win” configuring a “government of progress”. For his part, Rodríguez asked Moreno not to "take Andalusians hostage to that strategy" because "Andalusians want to vote once, and that a government emerges from there, as is logical."

In the “fear” elections that are incited by each other, the leader of San Telmo is also playing his cards. If the majority of Andalusians support him, or as he himself has commented, if the electorate gives "a sufficient majority to a liberal center government as represented by the Andalusian PP", after 19-J a new legislature will start, if not, They open two options: that he be forced to agree and "reach agreements that we do not want" or, to return to summon the citizens in a second electoral round. The alternative to this, he has said, is a "Frankenstein following the Sánchez model", despite the fact that the PSOE-A (with 33 seats according to this barometer), Por Andalucía (8) and, in the hypothetical case that Adelante Andalucía would like to square the circle (2 seats) would not add up to enough.

In this situation, although Por Andalucía abstained from Moreno's investiture, a door left ajar by its leader, Inmaculada Nieto, if the rest of the parties rule against it, this long-awaited single-color government of the president would not be viable. In addition, today it was Nieto herself who declared that the leftist coalition was going to work so that there would be an Executive in the community "for progress, equality, social sensitivity, justice for the redistribution of wealth" so that "the scenario that It takes away from Moreno having to think about whether to call elections again because that decision is not in his hand.

The popular ones remain unclear about their intention to agree with Vox if the situation required it. They neither affirm nor deny, although Moreno Bonilla established a series of red lines that he is not willing to cross in a hypothetical pact with the extreme right. He has referred to non-negotiable issues for them such as gender violence, a scourge denied by Vox; climate change, questioned by those of Abascal; the advantages of being part of the European Union, when the members of the opposing formation have declared themselves "Eurosceptics", despite finding some MEP in their ranks; and, the defense of Andalusian autonomy, a pillar that wants to be overthrown by Vox and against which Cs also fights.

On the other hand, the leader of Andalusia has defended that those of Abascal constitute a "democratic party that complies with the regulations in force in the Constitution, therefore, constitutionalists. And, as long as it fulfills those obligations as a party, it deserves the rest and consideration, ”he remarked.

Macarena Olona, ​​a Vox candidate in Andalusia, for her part, continues to tighten the rope and try to gain supporters among those disenchanted with Moreno's legislature. "Either Vox or the embrace of the PP and PSOE", she has commented today trying to polarize the voters. “A revulsive is needed” and, in her opinion, “the only party that offers hope is Vox”, she determined, since she has declared that the Moreno Government betrayed the change by “managing the socialist farmhouse” .

The vice president of the Board and leader of Cs, Juan Marín, has also joined this river of troubled waters, who, although he has not described Moreno's announcement about the proposal he has made to some advisers of the orange formation as treason for them to join the popular ranks, he has called it an act of "disloyalty".

The orange candidate, whose party is on the verge of disappearing according to the Key Data survey, is now wondering about the urgency of having budgets for 2023, an argument used by the popular to advance the elections. "How are you going to make a budget in three months with Vox as a government partner? Are you no longer worried about having new accounts for 2023?" He commented.

The regional accounts for this year fell when Vox, the party that until then had been a "friend" for the Government, changed its strategy with Moreno becoming the true scourge of the Executive. Not only did they drop the budgets, but they were installed in the policy of attrition at the regional level and also at the national level.

In Madrid, the Cs has pointed out, "Mrs. Ayuso has not been able to approve a budget with Vox" after a year of Government, and now she wonders if Moreno really believes that she is capable of agreeing some accounts with them.

Marín has proclaimed himself the real barrier to stop the advance of the extreme right and so that Andalusia does not repeat the same scenario that has occurred in Castilla y León, when, after the early electoral strategy carried out by the popular Fernández Mañueco to expel Cs from the equation, the PP of that autonomy was forced to cede executive positions to the ultranationalists. “Cs will not give their vote to a PP-Vox government”, he has said, “others cannot say that they are not going to govern with Vox. I do”, he sentenced.

The cost of the elections to the Andalusian Parliament will amount to 17.7 million euros, according to data from the Ministry of Finance and Public Administration. The 2018 elections involved an expenditure of 11.8 million euros and the previous ones, in 20112, the figure was 14.5 million euros.

For its part, the Junta de Andalucía has agreed to maintain for these elections the amounts established for the elections of December 2, 2018 by the then Ministry of Finance and Public Administration to set the amounts of the subsidies for electoral expenses and the limit of the themselves, so that the parties will count for this new appointment with the polls with up to 3,821,902.81 euros in subsidies for electoral expenses.

This follows from the order of the Ministry of Finance and European Financing published in an extraordinary number of the Official Gazette of the Andalusian Government (BOJA), signed by the head of said department, Juan Bravo, where it was argued that "in the current situation In a scenario of general financial uncertainty in which it is necessary to carry out a cost containment exercise, it is considered appropriate not to proceed with an increase in the amounts corresponding to electoral expenses".

The limit of the electoral expenses that each party, federation, coalition or group of voters may carry out in said elections will be the amount in euros that results from multiplying by 0.4511 the number of inhabitants corresponding to the legal population of each of the constituencies.

Likewise, according to the provisions of the Electoral Law of Andalusia, for each seat obtained, the parties will receive 23,034.99 euros, and for each vote obtained for each candidacy that has obtained at least one seat, 0.8501 euros.

In relation to the subsidy for direct and personal mailing to voters of envelopes and ballots or propaganda and publicity, the parties will obtain 0.1215 euros per voter when more than five percent and up to ten percent of the valid votes are obtained. issued in elections.