The ERC delegation has been received this Sunday with a whistle and shouts of "Out" in the traditional floral offering to the Rafael Casanova monument for the Diada. 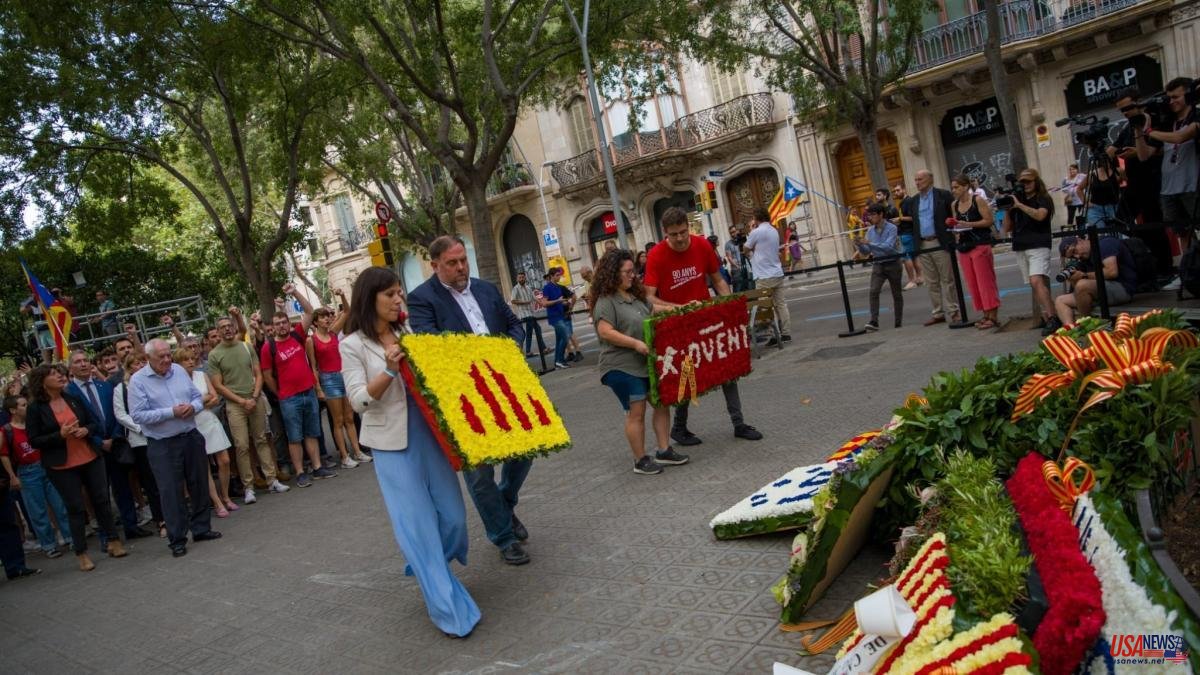 The ERC delegation has been received this Sunday with a whistle and shouts of "Out" in the traditional floral offering to the Rafael Casanova monument for the Diada.

The leaders of the ERC, led by its president, Oriol Junqueras, and the deputy general secretary and spokesperson for the ERC, Marta Vilalta, arrived at the offering shouting "Independence", while receiving whistles from the people gathered near the monument.

After what happened, Vilalta has asked the independence movement not to be confused as an adversary and to leave the reproaches: "The adversary is before us, it is the Spanish State."

The Republican, in statements to the media after participating in the offering, has assured that transversality and plurality are "one of the great strengths" of the independence movement and has opted to build consensus and not give up any space to defend them.

"We regret that this is not the path to victory. We must join and recover hope and self-esteem. It is about defending consensus, shared struggles, defending transversality. We will do our job in the streets and at the negotiating table Vilalta said.

Despite the fact that the Government and the rest of the political formations have also been booed, the whistle to the ERC delegation has been the loudest. Although not the most controversial. The leader of the PP in the Barcelona city council, Josep Bou, has been received with shouts of "fascist".

The discomfort among the pro-independence ranks was already evident from the first hours of this Diada. During the early morning, in the Fossar de les Moreres, an emblematic location for the independence movement, there were moments of tension, boos at representatives of some parties and shouts of "botiflers" (traitors) at ERC leaders.

At the stroke of midnight, when hundreds of people gathered at the Fossar de les Moreres to remember the resistance against the Bourbon troops that took the city of Barcelona on September 11, 1714, in the War of Succession, the assistant general secretary of ERC, Marta Vilalta, arrived at the place to participate in the usual round of political speeches.

The ERC delegation -in which the former Minister Meritxell Serret was - was received with whistles, insults and shouts of "botiflers" and "independence", which continued during the speeches of the Republican leaders.

Vilalta responded to the boos: "You can yell, yell more if you like. Come on, we can't hear you. Because while you yell, we, the people of ERC, will work to lead this country to freedom."

The PDeCAT delegation also received whistles and boos from some of those attending the Fossar de les Moreres, while the party's organization secretary, Genís Boadella, spoke.

More placid was the intervention of the general secretary of JxCat, Jordi Turull, who asked to park the "reproaches" between independentistas and "mark an itinerary that says: independence or independence".

The tension in some moments of the concentration was also translated into an alleged attack on a television camera, which was pushed by two women and made to fall to the ground.

The camera, a "freelance" contracted by TVE to cover the Fossar acts, was recording a scuffle between some protesters and the PDeCAT delegation when it was pushed to the ground, for which it has filed a complaint with the Mossos.

The Diada celebrations began at ten o'clock on Saturday night with torchlight marches in various Catalan towns, including Barcelona, ​​in the Fossar de les Moreres.