The last words of Benedict XVI: "Jesus, I love you"

The last words of Benedict XVI before passing away, this Saturday at 9:34 in the morning, were: "Jesus, ich liebe dich" ("Jesus, I love you", in German). 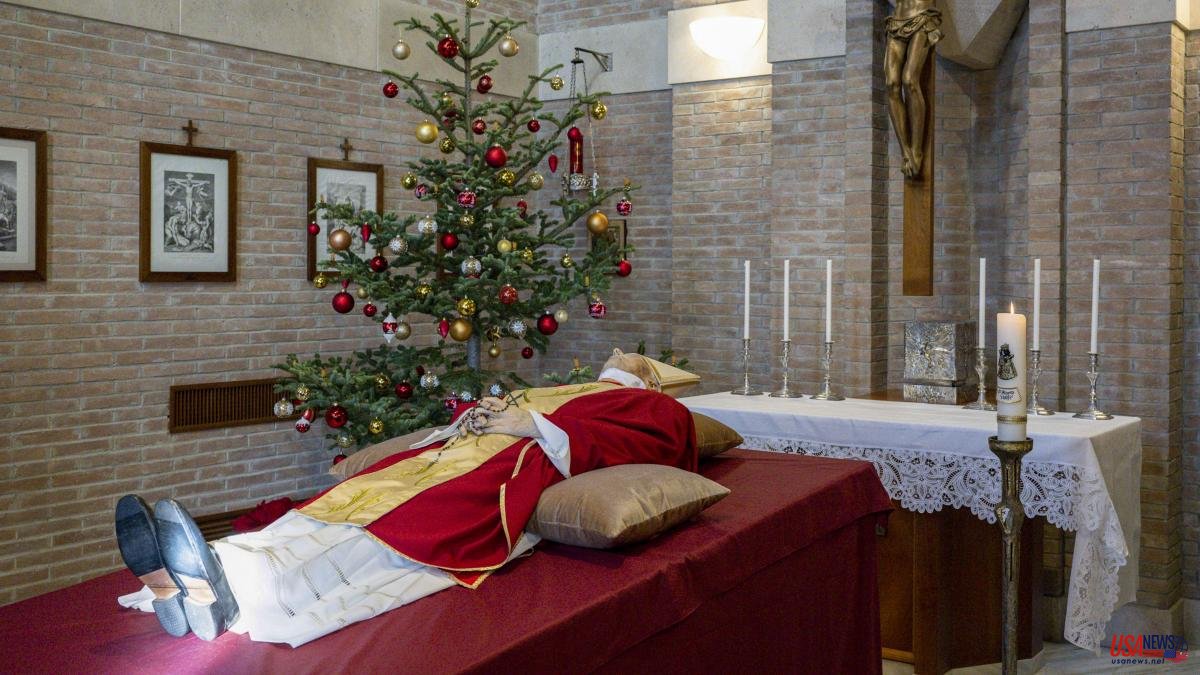 The last words of Benedict XVI before passing away, this Saturday at 9:34 in the morning, were: "Jesus, ich liebe dich" ("Jesus, I love you", in German). This is stated by the Argentine newspaper La Nación, citing informed sources. The emeritus pope died at the age of 95 in the Mater Ecclesiae Monastery, in the Vatican gardens, where he has lived since his historic resignation in 2013 and where this Sunday his mortal remains rest before they are transferred on Monday morning. to St. Peter's Basilica for the funeral chapel.

The first person who went to the Monastery after his death was Pope Francis, as confirmed by the spokesman for the Holy See, Matteo Bruni. Jorge Mario Bergoglio, who had given instructions that he be immediately informed of his situation, received a call from Georg Gänswein, Benedict XVI's loyal personal secretary, to notify him of his death. So, in just ten minutes, the Jesuit pope went to Mater Ecclesiae to pray over his body and give him a final blessing.

The Pope also conveyed his condolences to the people who were present during the death: Gänswein, the four consecrated lay women of the "Memores Domini" institute belonging to the Communion and Liberation movement (who have taken care of him and domestic chores in his last years ), two doctors, two nurses and their German secretary, Sister Birgit Wansing. La Nación also reveals that Francisco wanted the news to be known immediately, so the personal secretary called the spokesman Matteo Bruni, who an hour later reported his death to accredited journalists.

At the Angelus this Sunday, Francis remembered his predecessor and invoked the intercession of the Virgin. "We all unite together, with a single heart and a single soul, in giving thanks to God for the gift of this faithful servant of the Gospel and of the Church", he said. Before, he had already entrusted him at the first mass of the year in Saint Peter's Basilica, "to accompany him on his way from this world to God".

The Holy See press office has released some photographs of the body of the German pontiff, dressed in the pontifical red chasuble but without a canopy, which his predecessor, John Paul II, wore in the funeral chapel when he died in 2005. The first Images show him in the chapel of the Mater Ecclesiae monastery, on two cushions, and next to a Christmas tree, a nativity scene and a huge cross.

Everything, waiting for it to begin, tomorrow at 9 in the morning, the funeral chapel in the Basilica of San Pedro. Some 35,000 people are expected to come to watch over the mortal remains of the late pope emeritus and another 65,000 will flock to Rome on Thursday for the funeral, which will be a sober ceremony in St. Peter's Square, presided over by his successor.

For now, the Vatican has been filled with regular tourists but also with Catholics who want to remember Ratzinger. “He was an intelligent man, well, and he has seen the disasters that were in the Vatican, the ones you know… but he did not have the courage or courage to face them. I think he resigned for that reason, ”said an 88-year-old woman, accompanied by her daughter, in front of the nativity scene in Saint Peter's Square. “I appreciated him a lot as a theologian, I have read his texts. As Pope, he lived through the problems of a Church that has difficulties, because changing the Roman curia is not easy”, agreed a man from Genoa, who did not want to miss the historic day.