The recently appointed president of Brazil, Luiz Inácio Lula da Silva, was the last personality to visit Pelé's wake, which closed shortly after two in the afternoon (Spanish time) after 24 hours receiving uninterrupted reception from authorities, soccer players and citizens. 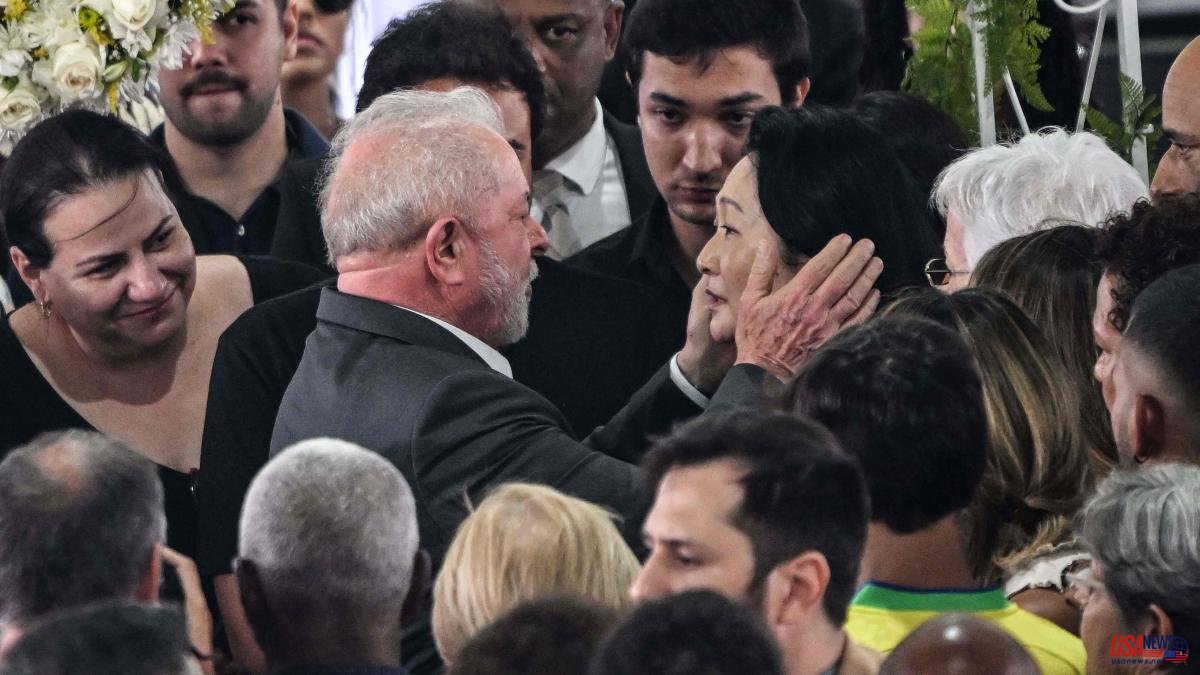 The recently appointed president of Brazil, Luiz Inácio Lula da Silva, was the last personality to visit Pelé's wake, which closed shortly after two in the afternoon (Spanish time) after 24 hours receiving uninterrupted reception from authorities, soccer players and citizens. anonymous from around the world.

In the midst of a large security device and by helicopter, the president has landed in Santos and after ten minutes around one in the afternoon (Spanish time), he has accessed the premises with his wife Rosángela on his first official trip outside of Brasilia since he was sworn in on Sunday.

Lula da Silva greeted Pelé's widow, Marcia Aoki, and the rest of the family and witnessed the brief Catholic ceremony offered by a priest before the wake closed. "Death comes for everyone, for kings too," she said during the service in which she offered a prayer so that Pelé's soul "suffers nothing" and sets course for "immortal life in the eternal kingdom." .

Lula da Silva was sworn in as President of Brazil last Sunday, in a ceremony in which a minute of silence was observed in honor of 'O Rei'. The Government, in addition, decreed three days of national mourning after his death on Thursday, in a hospital in Sao Paulo, at the age of 82, after more than a year fighting colon cancer that was diagnosed in November 2021.

It is estimated that between 100,000 and 150,000 people have said goodbye to Pelé at the Vila Belmiro stadium, according to the local press. At times there were waits of more than four hours to access the venue where the coffin was located, covered with the flags of Santos, the club for which he played almost his entire career, and of Brazil, with which he won three World Cups.

One of the first to pay their respects to 'O Rei' was the president of FIFA, Gianni Infantino, who attended the wake yesterday along with the presidents of Conmebol, Alejandro Domínguez, and the Brazilian Football Confederation (CBF), Edinaldo Rodrigues. From Spain, Emilio Butragueño, former player and current Director of Institutional Relations for Real Madrid, also visited Vila Belmiro yesterday. Personalities linked to football such as former players Elano, Cloaldo Tavares or Antonio Lima dos Santos, as well as several members of the current Santos squad, have also expressed their condolences. Zé Roberto was in charge of carrying the coffin together with Pelé's son, Edinho.

Pelé's remains will rest in the Santos Memorial Ecumenical Necropolis Cemetery. A monumental ten-story building, with a capacity for 14,000 graves that holds the Guinness record as the tallest cemetery in the world. The Brazilian star bought a niche there two decades ago, on the 9th floor and facing Vila Belmiro, the stadium that gave him so many afternoons of glory wearing the Santos jersey. Although the possibility of him being buried on the ground floor has been considered to facilitate access for soccer fans from all over the planet who will surely turn this point into a pilgrimage center after Pelé's death.

His father Dondinho and his brother Jair are also buried in these cemeteries. Pelé had always been attracted to this place, so little like a cemetery and he assured that it gave him a lot of peace and tranquility and that is why he chose it for his eternal rest.