The King welcomes NATO leaders with a defense of unity

"Unity has been key to the success of NATO throughout its history and today it has a special value", defended the King in his speech, entirely in English, at the opening of the official dinner that he offered together with the Queen to those attending the NATO summit. 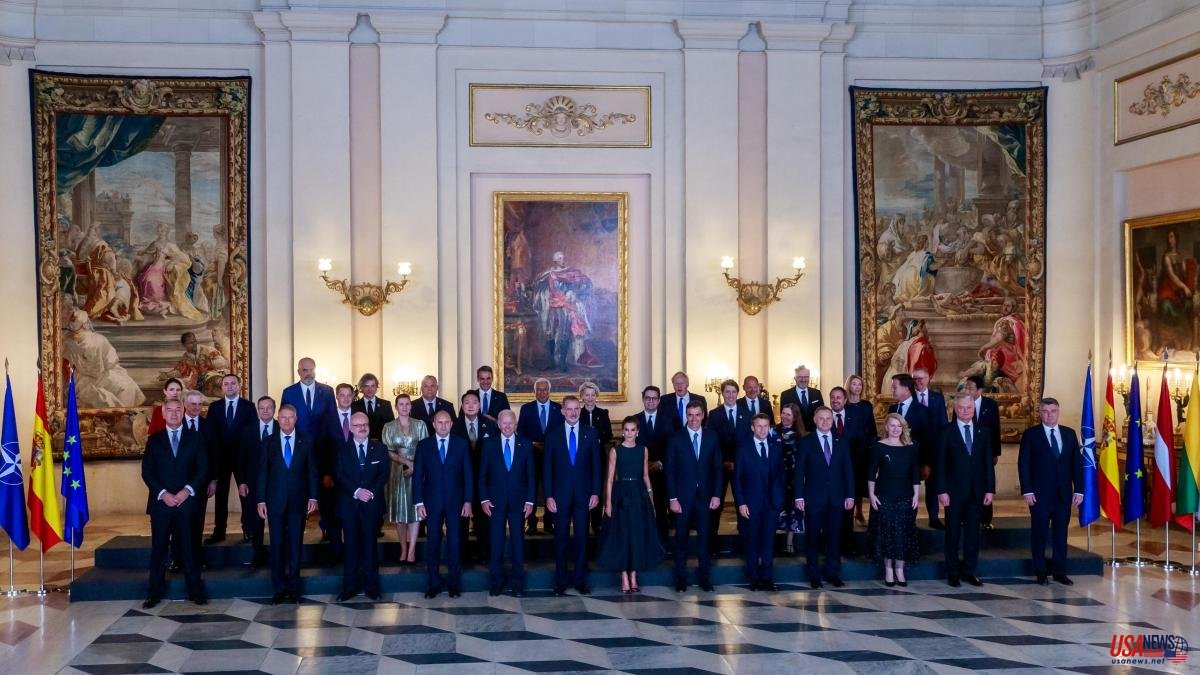 "Unity has been key to the success of NATO throughout its history and today it has a special value", defended the King in his speech, entirely in English, at the opening of the official dinner that he offered together with the Queen to those attending the NATO summit. Along with the hosts, the President of the Government, Pedro Sánchez, and his wife, Begoña Gómez, participated in this act prior to the start of the meetings -which will be held on Wednesdays and Thursdays-, along with 14 other Presidents of the Government and 21 prime ministers, in addition to the president of the European Commission, Ursula von der Leyen, and a total of 18 companions of the leaders. The Secretary General of NATO, Jens Stoltenberg, was absent from the meeting to announce, at Ifema, the withdrawal of Turkey's veto on the accession of Sweden and Finland to the Alliance.

The King made a speech in an Atlanticist key, which began with a parallelism between the geostrategic reality that frames the summit that will take place this week in Madrid and the NATO summit that was also held in the Spanish capital twenty-five years ago, in 1997. These were "times of intense change and remodelling, not only in Europe", he underlined, alluding to the step that the Alliance took then towards an enlargement process that would overcome the Cold War.

"We cannot ignore the deep symbolism that unites these two historical moments", he assured, although pointing out that in 1997, despite the threats to peace and security, "a spirit of optimism reigned", after the fall of the Wall of Berlin. The current reality is different.

"The war has returned to Europe," said Felipe VI, who has condemned the "flagrant violation" of Ukraine's territorial integrity, and has assured that "no country is alien to this war." "The same security of Spain and Western Europe also passes through Ukraine", he added, asking for support for the Ukrainian people, in defense of democracy, human rights and an open international order based on rules. "The strategic optimism of 1997 must give way, not to pessimism, but to strategic realism," he concluded.

Among the objectives of the summit that starts sessions tomorrow in Madrid, the Head of State has highlighted those that should be the keys to the Alliance's strategic guide for the next decade: "Strengthen our deterrence and defense, consolidate the strength of our societies , allow us to maintain our technological advantage, prepare for the impact of climate change on security and, finally, equip NATO with adequate resources that allow us to achieve the level of ambition that we aspire to."

Against this background, the King has made a defense of unity, which "has been key to the success of NATO throughout its history and today has a special value." Its main feature, he has said, is the "strong transatlantic link" between the United States, Canada and Europe. And, given "the magnitude of the challenges" of the present, he has defended extending this unity to "strategic partners" with whom the Alliance shares values, principles and goals. "There can be no clearer display of the global vision espoused by the Alliance" than the participation of Australia, South Korea, Japan and New Zealand, whom he welcomed at the first NATO summit they attend.

In the final section of the speech, the Head of State detailed Spain's contribution to NATO, on the 40th anniversary of its integration into the Atlantic club. "Not only has it brought military power, but also the power of its history, the power of its society's commitment and the power of its strategic vision," he said. "Spain continues to be a loyal NATO partner", he concluded.