The King endorsed this Wednesday the signing of a joint project between Spain and Croatia to promote clean energy, as part of his first official visit to the Balkan country to celebrate the 30th anniversary of the start of diplomatic relations. 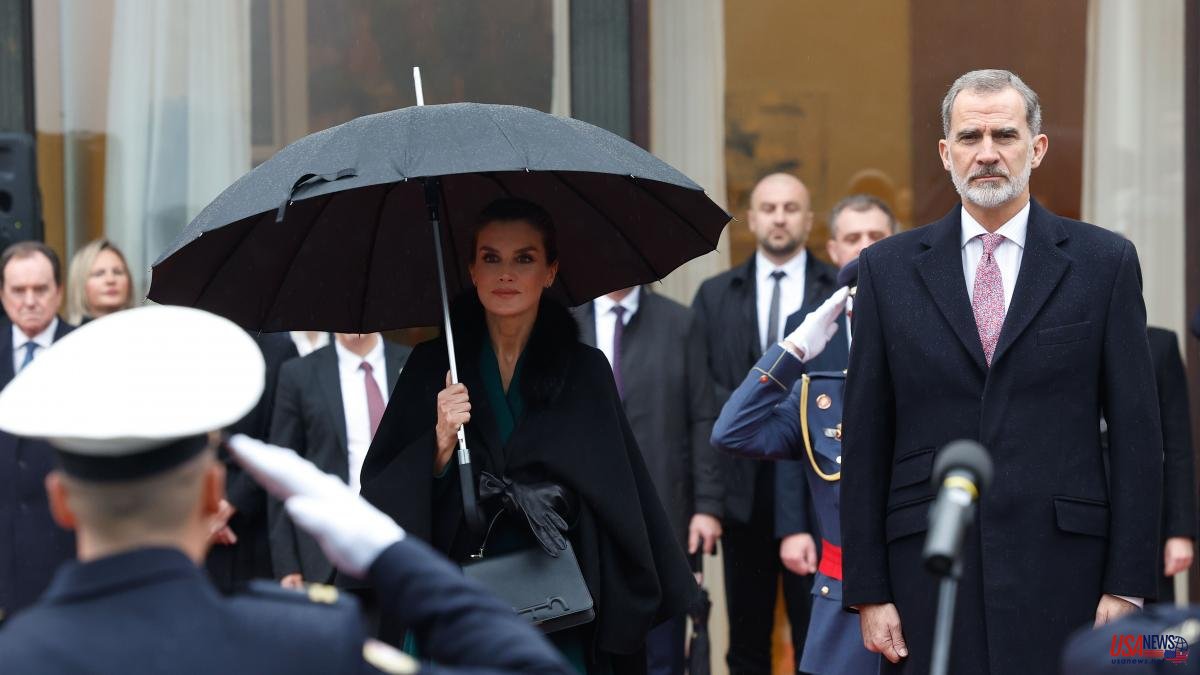 The King endorsed this Wednesday the signing of a joint project between Spain and Croatia to promote clean energy, as part of his first official visit to the Balkan country to celebrate the 30th anniversary of the start of diplomatic relations. Croatia is, together with Cyprus, the only country in the European Union that, until now, had not hosted a visit from either the current or the previous head of state, since the country's independence in 1991.

The King and Queen arrived in Zagreb this afternoon, in the midst of heavy rain, accompanied by the Minister of Science and Innovation, Diana Morant, and from there they went to the presidential palace where the official welcome ceremony and reception of the president took place. Zoran Milanovic and his wife, Sanja Music. There, after playing the national anthems, both heads of state have reviewed the troops, to which the King has addressed in Croatian with a "Pozdrav vojnici!" (I salute the soldiers).

The presidential palace, measuring 3,500 square meters within a ten-hectare estate, was built in 1964 as the residence of Mariscal Tito. Inside, a meeting took place between the two couples who remembered their first meeting last June, in Madrid, on the occasion of the NATO summit.

After a first meeting with four, they later met separately: the King with the Croatian president and the Queen with the first lady. The two heads of state have exchanged views on the state of diplomatic relations between the two countries, which celebrate their 30th anniversary this year, and on community policy, with a view to the rotating presidency that Spain will hold in the second half of 2023.

Croatia was the last country to join the EU, in 2013, and as of January 1 it will take the euro as its currency and become part of the Schengen area of ​​free movement.

They also talked about international current affairs, such as the war in Ukraine. Milanovic, in the presidency since February 2020, after having been prime minister between 2011 and 2016, has been involved in various controversies in recent months over his sympathetic positions with Russia and against Croatia training Ukrainian soldiers, while consider that it would be "an unnecessary involvement in the war". Weeks before the Russian invasion, Milanovic accused the United States of instigating the crisis, prompting Ukraine's formal complaint.

For their part, the Queen and the wife of the Croatian president exchanged views on "innovative approaches to the prevention of childhood obesity and in favor of a favorable life", according to sources from La Zarzuela. Sanja Music, a doctor and university professor of Epidemiology, is responsible for the national program for the promotion of a healthy life, as well as a WHO advisor on childhood obesity. A healthy diet is also an issue of concern to the queen, who is a special ambassador for Nutrition for the Food and Agriculture Organization of the UN (FAO).

The agenda of the Kings continued in the afternoon with a floral offering at the Monument to the Fatherland and, tonight, closes with the dinner that President Zoran Milanovic and his wife offer to the Kings in the presidential palace. For dinner, the Queen has chosen a midnight blue midi dress, with a beaded strap on the neckline, from the firm Boüret from A Coruña, which she premiered on July 5 in Cornellà at the Princess of Girona awards ceremony. Upon arrival in Zagreb, due to bad weather, Letizia has covered herself with a black cape under which she wore a dark green dress-coat that she wore for the first time, in London, to attend, on March 29, the funeral for the Duke of Edinburgh.

The official visit of the King and Queen to Croatia, of just over 24 hours, ends this Thursday with the holding of a scientific-business forum in which, in the presence of the King and President Milanovic, a memorandum will be signed with the Croatian government to reinforce the project to install the Ifmif-Dones particle accelerator in the town of Escúzar (Granada), whose objective is to experiment with materials that would support nuclear fusion.

The Queen, together with the wife of the President of Croatia, will visit a Hearing and Speech Rehabilitation clinic.