King Felipe VI and the President of the United States met this afternoon for half an hour at the Royal Palace in Madrid, on the first visit that the North American president has made to Spain. 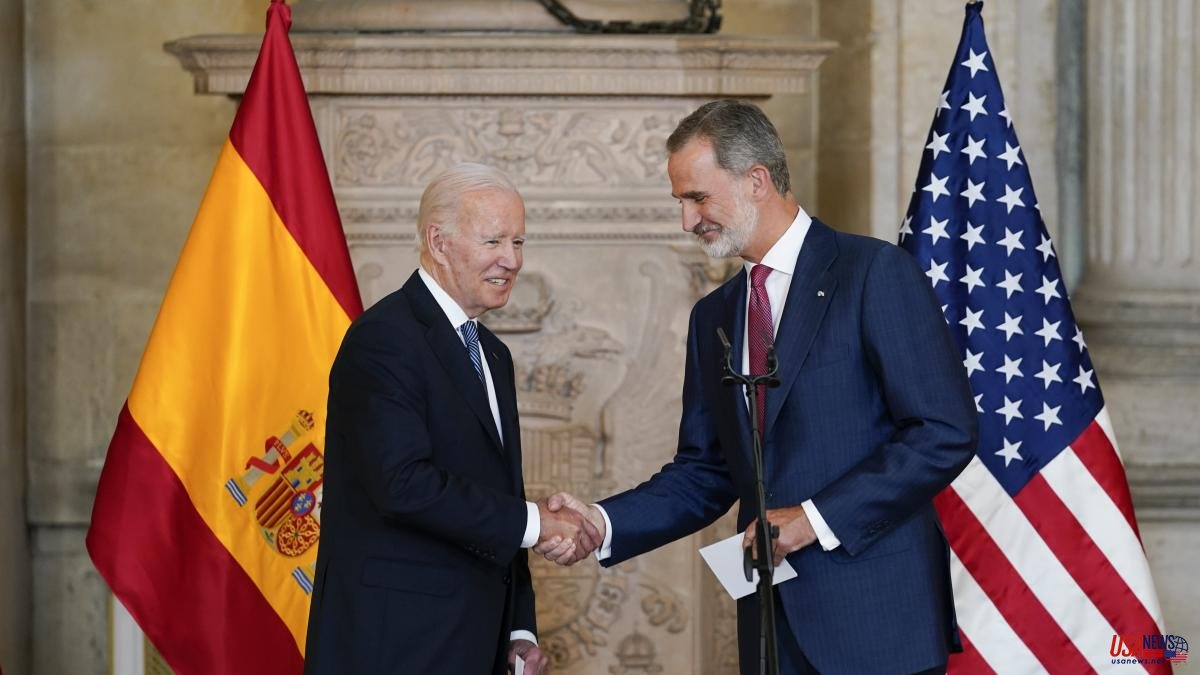 King Felipe VI and the President of the United States met this afternoon for half an hour at the Royal Palace in Madrid, on the first visit that the North American president has made to Spain. In the meeting, prior to the official dinner that the monarch offered to the heads of state and government who will participate in the NATO Summit from tomorrow, both agreed that unity is essential to defend democracy and freedom against Russian threat.

King Felipe VI received in the Plaza de la Armería of the Royal Palace and accompanied him up the ambassadors' staircase to the hall of columns, where their respective delegations were already waiting for them, headed by the Spanish Foreign Minister, José Manuel Albares and the secretary of American State, Antony Blinken.

There, Don Felipe welcomed Joe Biden, who expressed his satisfaction at welcoming him to Spain for the first time, although they had already met on other occasions, at world meetings. The two agreed that unity is very important at this time, to defend democracy and freedom.

Biden stressed that "unity is important to demonstrate the power of democracies. We have to win", said the president of the United States, who stressed that "we are willing to face the aggression of Russia. There is no other option", stressed Biden, who indicated that "Spain is an indispensable country within NATO" and thanked Spain for its role in the war in Ukraine, as well as in migration.

"We are ready to stand up to Russia's aggression and threats, because there is no other option. It has been an unprecedented abuse of power since World War II," he said.

On migration, Biden highlighted the North American experience, on its southern border where "we have always had migratory flows", they are migrants, he stressed, that "the majority speak Spanish."

Don Felipe underlined in his welcoming address to Biden that the NATO summit that begins tomorrow is, without a doubt, a summit of special relevance, in which "as allied countries we must continue to show our unity and determination to defend our freedom and our democratic values".

Biden joked with the King to remind him, as he had done, that they had emotionally coincided before and told him that he remembers their meeting at the Climate Summit, although then, he told him with a laugh, he was Vice President of the United States, and Don Felipe was still prince.