The keys to victory over Djokovic, according to Nadal

Rafael Nadal once again proved to be unique. 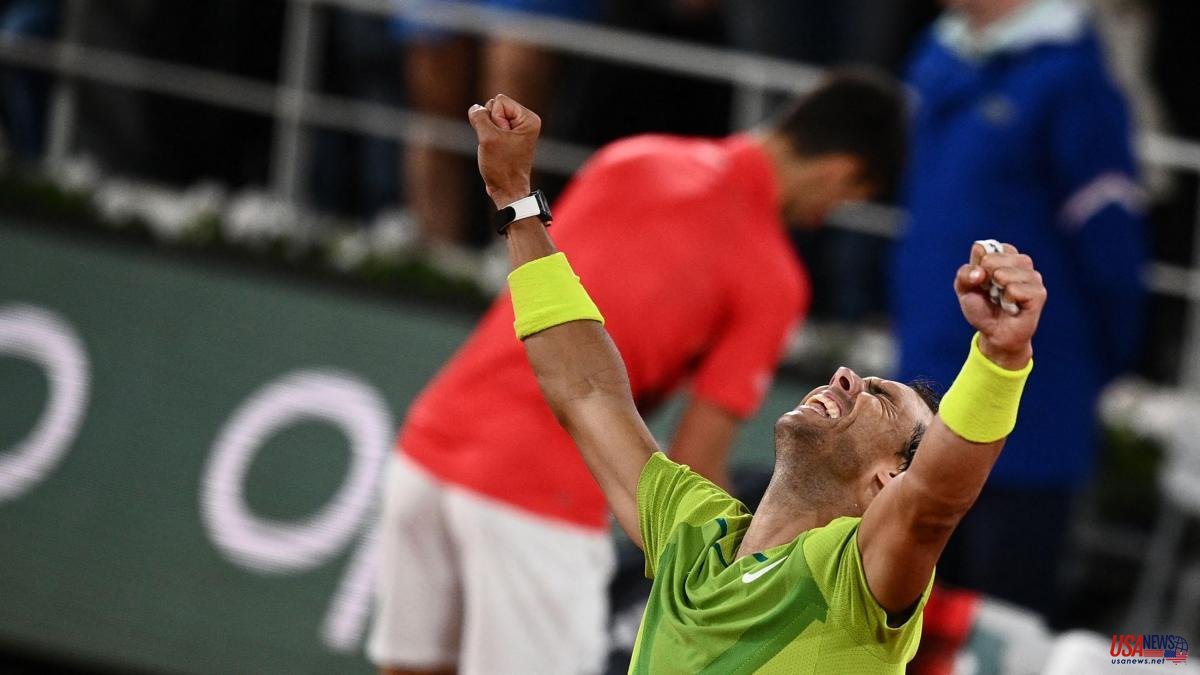 Rafael Nadal once again proved to be unique. When he started Roland Garros he was not among the favourites, for the first time in a long time. The physical problems that he dragged along, the return of Novak Djokovic and the meteoric irruption of Carlos Alcaraz left him in the background. However, the semifinals arrive and neither of his two main rivals is still in the running.

The fault that the number one in the world is no longer with Nadal, monumental in the match against the Serb in the quarterfinals that once again amazed the world. Another duel for history. The Balearic tennis player recovered his best level after a few delicate months and is two steps away from enlarging his legend in the Grand Slams. He is the most successful male tennis player (21) and he is going for more.

After four hours of suffering and exhaustion, in the wee hours of the morning he appeared "excited" before the media to analyze the game. "I think that for more minutes I was more dominant than him. I missed a second set that shouldn't have gone with a double break, but that's what playing against Novak has to do," he said.

"I played my best game in the last four months, but due to lack of habit of playing at this level I lost that second set. Playing well, maintaining mental and physical intensity is a habit, and these three and a half months I couldn't train or compete "That's why victory is more valuable. In the third set I had a good level and in the fourth I didn't lose hope," he assured.

Nadal kept the question about his physical condition, pointed out that for this Roland Garros he will do well but promised to communicate how he is at the bottom when the tournament ends, something that can mark the future of his career. For this reason, he said, he left the door open for this to be his last Roland Garros. "Here we are going to leave everything. I don't know what can happen after here, but I will be able to compete and that is what I am doing. This is not the time to give many explanations. When the tournament is over I will explain it".

For all this, he considered the victory achieved against Djokovic "very special" and attributed his rise in level to facing him on the track where he has achieved the greatest successes of his career. "This track is special to me, it has something unique and on the day I needed it most I managed to reach a level that apparently I didn't have recently," he said.

Likewise, he was moved by the support of the public, which he thanked and explained because he "appreciates history": "You know that for me it is the most important tournament of my career and that in all these years I behaved appropriately in every way , at the fighting level and I had few complaints. They appreciate the effort I've made all these years to leave everything here. It means a lot to me, it's very exciting. "

For his part, Djokovic said he was proud of the fight against his great rival, admitting that he lost to a superior Nadal.

The Serbian tennis player congratulated Nadal on the victory and said he was not surprised by his rival's physical condition during the long battle under the lights of the Philippe Chatrier court. "I think he was a better player in the important moments," Djokovic said. "He started off really good. I didn't start off that well... I just kind of gained momentum as I came from behind in the second set, I managed to win the second set, and I thought, 'OK, I'm back in the game.' "But then he he made another two or three fantastic games early in the third. He was able to take his tennis to another level in those moments, especially at the beginning of every set, actually, except the fourth."

"I had my chances. Just once or twice. He could have taken me to fifth. Then the match could have been won by anyone. But then again, he showed why he's a great champion. Staying mentally strong and finishing the match the way he he did it. Congratulations to him and his team. Without a doubt he deserved it", he concluded.