The journalist from La Vanguardia Carmen del Riego received this Tuesday in the Congress of Deputies the Josefina Carabias award from the Chamber of Deputies from the president of the institution, Meritxell Batet, for her long career that makes her a "living history of parliamentary journalism” in Spain, in the words of Batet. 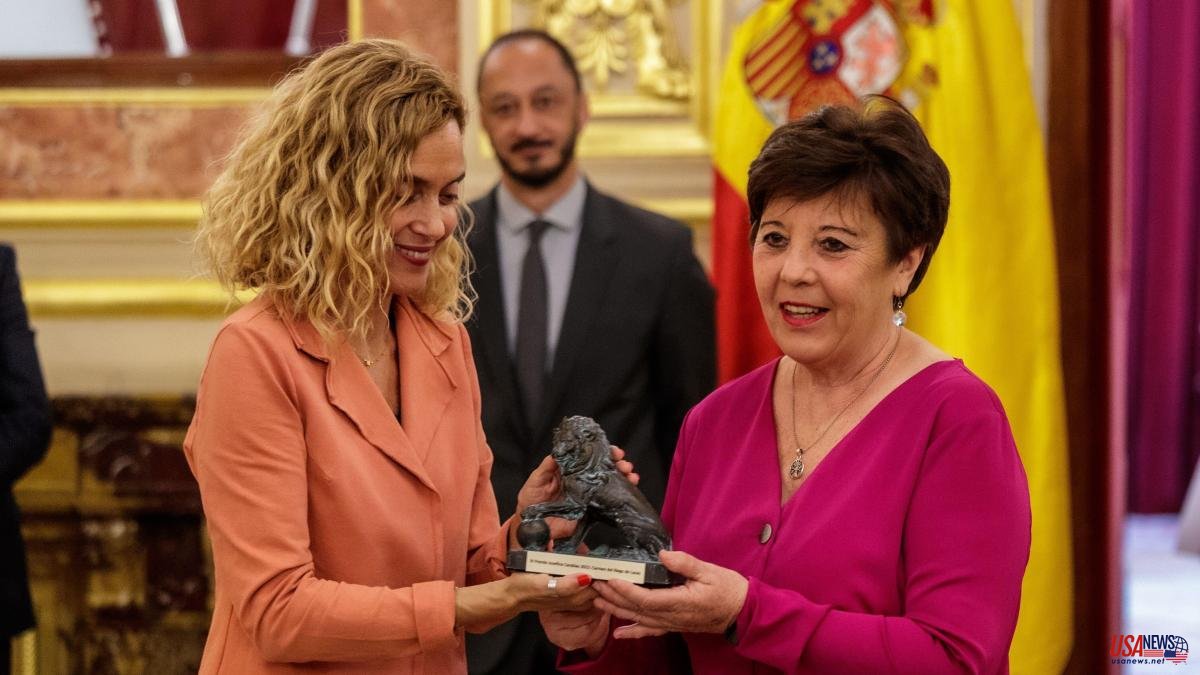 The journalist from La Vanguardia Carmen del Riego received this Tuesday in the Congress of Deputies the Josefina Carabias award from the Chamber of Deputies from the president of the institution, Meritxell Batet, for her long career that makes her a "living history of parliamentary journalism” in Spain, in the words of Batet.

In her acceptance speech for the award, Carmen del Riego recalled her beginnings in Congress working with Europa Press and reviewed the milestones she experienced in the Chamber and explained the evolution that politics and political journalism have undergone since those beginnings . In line with this, she criticized the journalism (and politics) "of the insult", which according to her is done by "those who have no arguments", who seek "easy applause" not from the readers of the newspaper but from "the followers" of everyone on social media. "These are the evils of current politics," she warned.

The winner also addressed Batet herself, who had given her the award, to request explanations from the millions of Spaniards who, like her, do not understand that between calls for dialogue by Cuca Gamarra or Batet herself this does not apply in the camera.

Del Riego highlighted how special this award is for her with the name of Josefina Carabias, a journalist who worked during the Second Republic, the Civil War and the Franco regime and who clashed with her parents to dedicate herself to this profession. Just like her, he remembered him. Her parents did not want her to become a journalist because they had no one in the profession who could help her in her career, which she took advantage of to make an emotional reminder of her father, who died in the first wave of the covid pandemic. "Today he would be proud of me," she assured with a broken voice. And she remembered that her family lived on Carabias' reflections and on her words. "He was a reference for the family," she added.

"She is a journalist with a long career who knows this house very well and in general knows politics very well," the president of Congress had previously praised the award-winning journalist.

The political chronicler and former president of the Madrid Press Association (APM) was nominated for this award by the APM itself, the Federation of Spanish Journalists Associations (FAPE) and the Association of Parliamentary Journalists (APP).

The Josefina Carabias Award was created in 2018 and is held annually to coincide with Women's Day. The first recognized journalist was Lucía Méndez, and in the second edition the jury agreed to award it to Anabel Díez and awarded posthumous recognition to the journalist Montserrat Oliva. In the third edition of the award, Fernando Garea was awarded.

Carmen del Riego has a degree in Journalism, Law and Political and Administration Sciences and began her professional career in Oviedo, in 'La Nueva España', and has dedicated herself for years to parliamentary information from media such as Europa Press or 'Diario 16 ', among others. Since 1992 she has worked for the newspaper 'La Vanguardia'.

She was a member of the Board of Directors of the Madrid Press Association since 2003 and president of the Association from December 1, 2011 to November 19, 2015, thus becoming the first woman to chair the APM.

His professional career has also been recognized with other awards, such as the 2016 Defense Award and the Luis Carandell Award for Parliamentary Journalism in 2014.