The Italian right, before the abyss of discontent

In Italy, the succession of one government to another is staged with the exchange of the bell with which the meetings of the Executive are opened and closed. 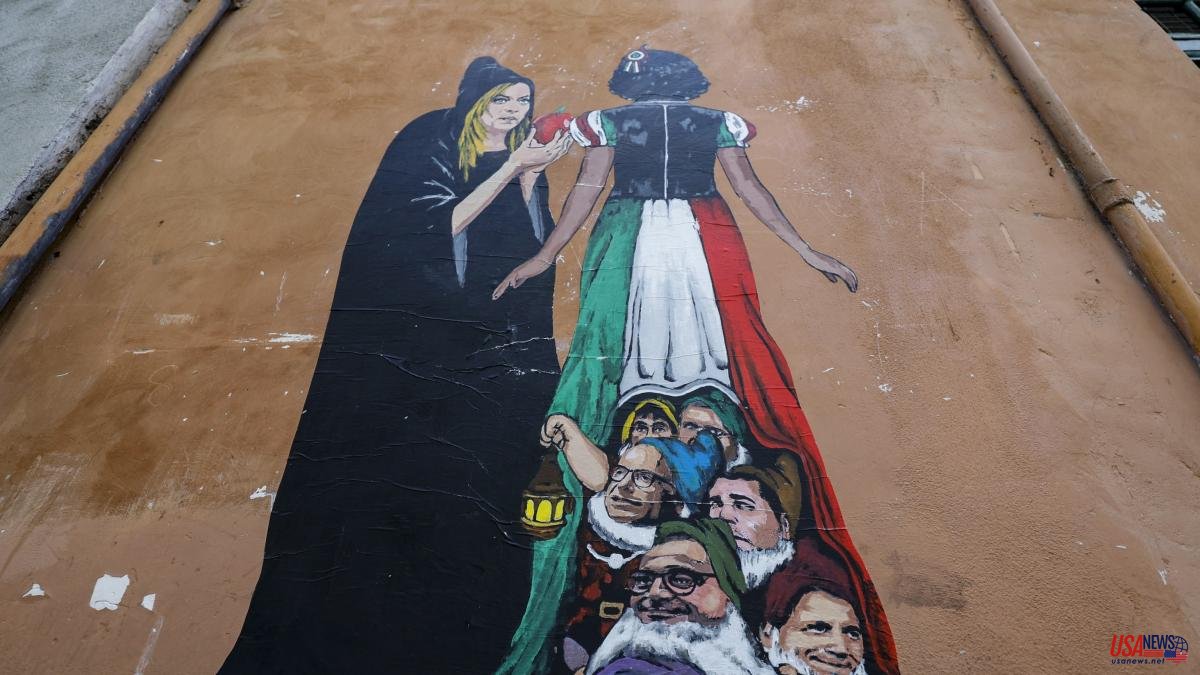 In Italy, the succession of one government to another is staged with the exchange of the bell with which the meetings of the Executive are opened and closed. It is the moment when the new ministers take the portfolios of their predecessors. But on this occasion, the government that will lead the elections next Sunday will also have to accept the reins of a very complicated economic situation.

All the polls say that the next Italian executive will be right-wing and will have a clear leadership of the Brothers of Italy (HdI), a party that emerged from the ashes of the post-fascist Italian Social Movement led by Giorgia Meloni, which has abandoned its anti-euro declarations and is striving in presenting herself as a moderate conservative to reassure markets and European officials. However, the Eurosceptic impulse has not completely vanished. From the stage of a recent rally in Milan, Meloni cried out, before the Duomo, addressing Europe: "The bargain is over."

It is undeniable that there is concern in the offices of Brussels about the future that awaits the continent with its third economy governed by an extreme right that openly criticizes the Franco-German axis while defending the Hungarian Viktor Orbán. More so when the one who will deliver the bell will be Mario Draghi, former president of the European Central Bank (ECB), who has led Rome to have the greatest influence in Europe in years and to a remarkable path of growth in Italian finances. The Financial Times published at the end of August that investment funds have launched their largest speculative bet on Italian debt in the markets since 2008 in the face of economic uncertainty, the increase in gas prices and, above all, a political tension that puts All eyes are on Meloni, a 45-year-old Roman woman who, although she promises that fascism is a thing of the past, brandishes "God, country and family" as her political motto. Milan's words are the first alarm.

"There is an objective concern about these policies in the European chancelleries," says former European Commissioner Emma Bonino, who is presenting herself within the leftist coalition, when asked by Dinero. According to La Repubblica, the Austrian Budget Commissioner, Johannes Hann, has assured that they expect "constructive cooperation" from her. There are calls from high level to ask how extremist there is in the possible first woman to govern Italy. Her dance partners will be another far-right party, Matteo Salvini's League, and Silvio Berlusconi's Forza Italia, after the European People's Party has blessed it.

The main obstacle that Meloni will encounter if she arrives at Palacio Chigi, surely in November, is not the mistrust of Brussels. The scenario that he will have to face is too tricky for there to be a confrontation from the first minute. The industrialized north of the country trembles with the price of gas, inflation at 8.4% impoverishes families, the Italian public debt remains colossal. The Government's estimates are that it will close this 2022 at 147% of GDP. Italy, highly dependent on Russian hydrocarbons, has a serious problem. The Executive has sent its own energy saving plan that plans to reduce heating in public and private buildings by one degree. Carlo Bonomi, the president of Confindustria, the Italian employers' association, said on Monday that he is talking to the Executive about potential gas rationing to reduce risks in the event that the flow of Russian gas is completely stopped.

This is not the time for grand provocations. Also because Italy is the largest beneficiary of the continental effort of the European recovery funds. It will receive almost 200,000 million euros between loans and non-refundable money. A loot conditioned to the execution of a series of structural reforms – especially competition, justice or public administration – that Draghi had started with a note. In the north of Europe they are suspicious that now Meloni wants to modify it, as he has explained, to adapt it to the rise in the price of raw materials. The risk is more delays. "It would be a level of masochism that I don't expect to see," says Bonino. No government is interested in fighting Europe because it risks losing this money. That might induce caution. From Brussels, the Commissioner for the Economy, Paolo Gentiloni, is already sending signals. “During the entire duration of the Next Generation EU we will have 20 or 30 national elections, we cannot change the plans because of that. But we are open to discussions with all governments, including Italy”, he declared this week.

One of the keys will be the tranquility with which Draghi leaves. The former banker, his collaborators say, wants the transition to be as orderly as possible. From HdI they filter that the relationship between the two is very cordial. They call each other often, and surely also with the President of the Republic, Sergio Mattarella. When he arrives, presumably in November, he will have less than two months to prepare next year's budgets. The easiest thing would be to follow the instructions of whoever has their hands in the accounts. According to Giuseppe di Taranto, Professor of the History of Economics at the Luiss University in Rome, the most important thing is to follow the path of growth. “This 2022 we should have an increase in GDP of around 3%. We are not in a negative phase, it is even higher than the Government's estimates”, he recalls.

"The great unknown is what direction he will give in four key ministries: Economy, Foreign Affairs, Defense and Interior," says Massimo Franco, an editorialist for Corriere della Sera. It could put pro-European profiles to calm the EU. For Economy, it has already been leaked that he wants to sign Fabio Panetta, a member of the executive committee of the ECB, who would be music in the ears of Brussels. It remains to be seen if he accepts. If he rejects it, given that the next government will have to choose the next governor of the Bank of Italy, he could stay out of this party. But it would not be entirely convenient for Italy either to abandon such an important European position.

“Any government that comes now will have to face the increase in energy prices and decide what support to give. Draghi has spent a lot to support low-income families. But at the moment there are no great indications in the electoral programs”, says Giampaolo Galli, economist at the Italian Public Accounts Observatory of the Catholic University of Rome. The energy issue is already causing tensions between Meloni and his ally Matteo Salvini, leader of the League. His way of dealing with it is different: he advocates increasing the Italian deficit and dedicating 30,000 million euros to help families and companies, while the leader of HdI does not want to further indebt the country. "If we don't stop the speculation, 30,000 million are useless," she reasons, calling for structural reforms.

They also have differences over the flat tax proposed by Salvini, a rate of 15% for 18 million workers, while Meloni wants a single progressive tax on increases in income or income. “It cannot be done at 15% because the costs are excessive and in the end it would be a benefit only for medium and high incomes. Frankly, I am surprised that a party with a popular matrix like HdI is going to accept it”, says Galli. The nerves on the right are already raw.