The face of Enrico Letta, general secretary of the Italian Democratic Party (PD), has appeared on several buses in the Italian capital. 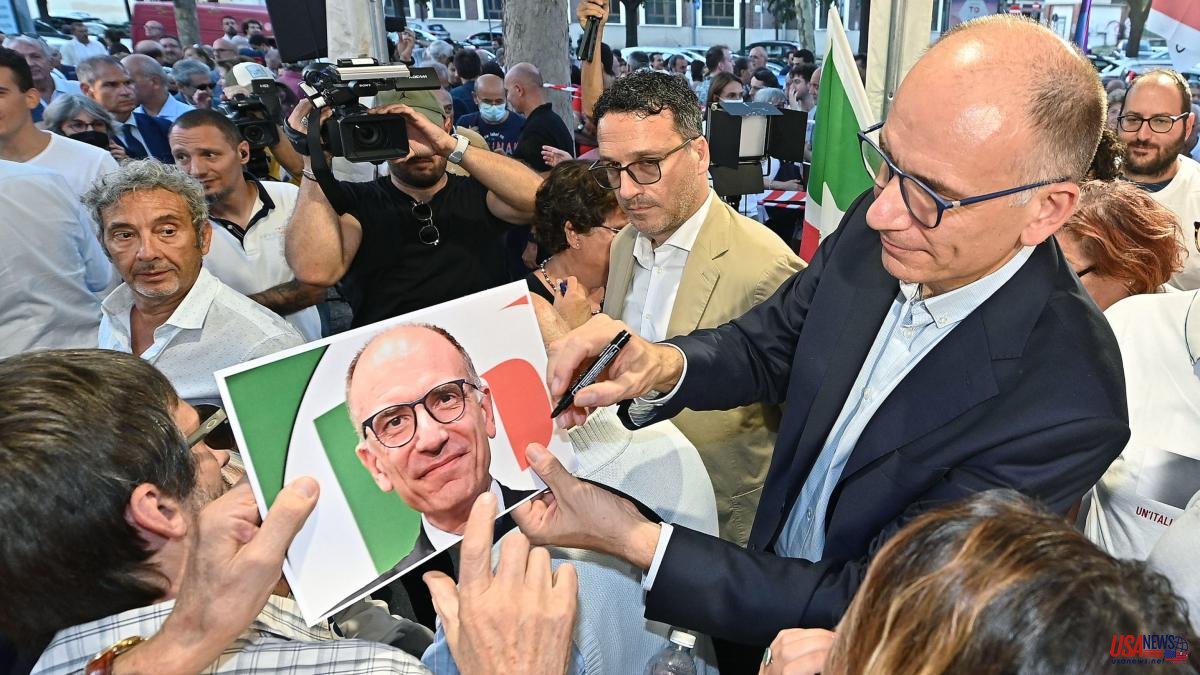 The face of Enrico Letta, general secretary of the Italian Democratic Party (PD), has appeared on several buses in the Italian capital. “Scegli”, he chooses, asks the Romans. On one side, on a red background, you can read a PD proposal: "Minimum wage." To the other, in black, “badly paid work”.

The message of the Social Democrats in this Italian electoral campaign is very clear: to present themselves to the voters as the only possible alternative to a far-right government. Us against them. The useful vote to stop Giorgia Meloni, leader of Brothers of Italy (HdI), and her teammates, league player Matteo Salvini and Silvio Berlusconi, veteran founder of Forza Italia.

"This is a kind of referendum, a bit like when the United Kingdom had to choose between Brexit or staying in the EU," said Letta, in the only face-to-face meeting with Meloni, held on Monday on the Corriere della Sera website. .

The latest polls released last week were not very encouraging for the centre-left. According to the Ipsos polling house, the right-wing coalition led them by almost 20 points. Alone, the PD fell to 20.5% of voting intentions, while HdI rose to 25.1%. If the trend continues, Meloni could climb even higher.

Seven days before the election date, nerves begin to surface within the party. Sources from the PD secretariat maintain that they can still come back because there are many open constituencies, but a parliamentarian admits that things are not going as they would have liked. Others, in private, already recognize that defeat is certain and that they no longer aspire to win, but to lose with dignity. Words have already begun to spread to find a substitute for Letta in the event of a lopsided defeat. One of the possible candidates would be the governor of Emilia-Romagna, Stefano Bonaccini, who is trying to boost morale. “We must compete to win, not to lose well,” he told La Repubblica.

On the street, the lack of enthusiasm is evident. Last week, at an electoral event in the center of Rome, most of the attendees were militants or journalists. The PD has broad electoral proposals, such as introducing a minimum wage or favoring the emancipation of young people. But their TV leaders must respond to right-wing concerns – such as migration or tax cuts – or threaten that with them Italy will follow the path of Viktor Orbán's Hungary on women's rights. This same week, HdI and the League voted against the resolution that considered that Hungary is no longer a full democracy. The still prime minister, Mario Draghi, has warned that the Italian partners must continue to be Paris and Berlin, and not Budapest.

The PD is the only party that tries to talk about climate change but it has not managed to make it a central issue in this contest either, despite its effects in Italy are more than evident, as shown by the terrible floods that in two hours left 10 dead and 3 disappeared this Friday in the Marche region. One of the ideas has even been mocked by his opponents: campaigning on board an electric minibus to show how unprepared Italy is for sustainable transport.

“I remember that José Luis Rodríguez Zapatero had everything against him in 2004 and ended up winning after a dramatic episode. Of course, I don't want a misfortune to happen, but there are many other examples of elections that have been traced back, ”says the PD's foreign affairs officer, Lia Quartapelle.

The reality is that, when the Draghi government fell in July, the PD found itself faced with a complicated diatribe. Letta had been paving the way for some time to convince the 5 Star Movement (M5E) to form a coalition together and try to stop the extreme right. When the M5E betrayed the former banker, the PD secretary quickly decided that he could not go hand in hand with a party with these kinds of outbursts. Now, there are those who believe that he shot himself in the foot. With the M5E, the coalition could have challenged Meloni for victory. Alone, no, because the Italian electoral law clearly favors the blocs. Giuseppe Conte's populist party is recovering a lot in the polls, especially in the south of the country, where its defense of a subsidy for the unemployed is clear.

"The PD overestimated the Draghi effect," explained the director of the Italian Center for Electoral Studies, Lorenzo De Sio, in a meeting with correspondents. “They thought that he was extremely loved and that the M5E would be penalized for taking him down. I remember what happened to Churchill: having defeated the Nazis, he suffered a great defeat. To win the elections you need a project for the future”, he points out.

Letta then opted to extend his coalition to Liberal Carlo Calenda's new party, Action. At first he accepted his proposal, but a few days later he backed down and announced his own agreement with Matteo Renzi, the former prime minister who is an expert in manipulating political crises. Now, both attack more to the left to try to scratch votes from their more centrist electorate than Meloni, with whom they do not rule out agreeing, in another setback for the Social Democratic candidate. Together, Calenda and Renzi are close to 7% of the votes.

“Whoever presents himself as neither on the right nor on the left always ends up being favorable to the right. Calenda and Renzi demonstrate it”, stresses Peppe Provenzano, deputy secretary of the PD, on the phone. He is confident that they can still dream. “We are in battle and in battle the last thing that is lost is hope. We will try to the end."