The increase in the minimum wage, Labor's main challenge for September

Yolanda Díaz has to add many deals next semester. 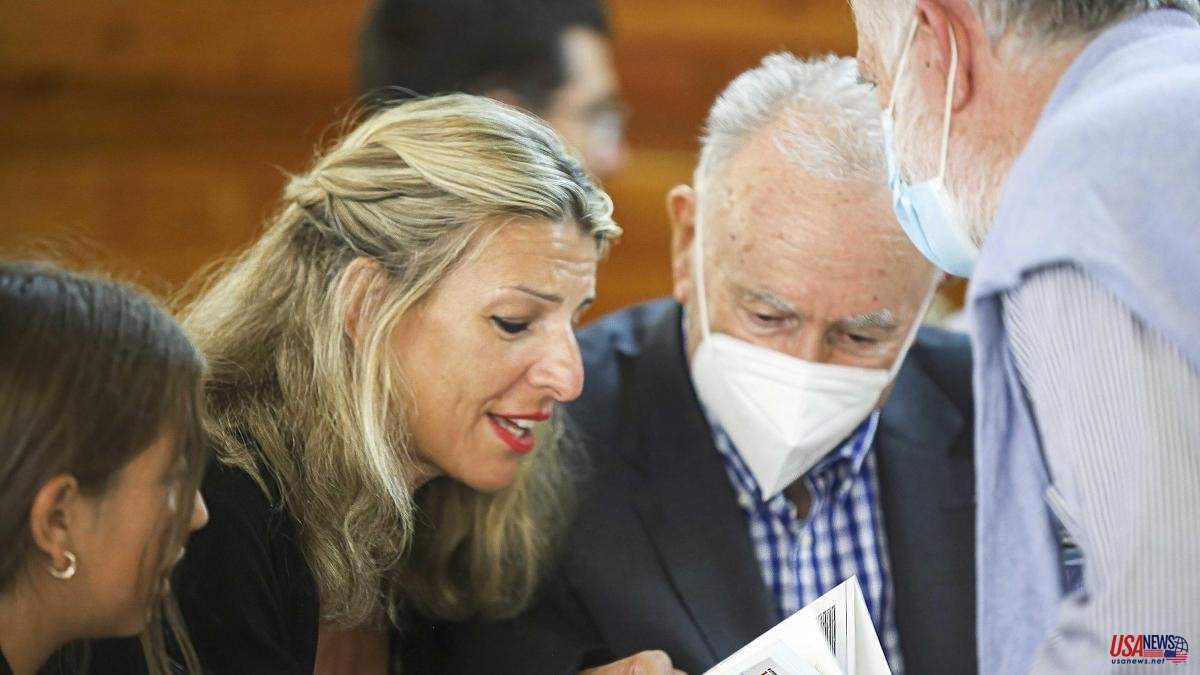 Yolanda Díaz has to add many deals next semester. If the candidate Díaz must continue with the, for the moment, arduous path to configure her electoral brand, the famous Sumar platform, the Minister Díaz has four major subjects to overcome before January: the increase in the minimum professional salary (SMI), leave its mark in the general budgets of the State of 2023, the statute of the scholarship holder and the Law of Institutional Participation.

The first big issue is the increase in the minimum wage, currently set at 1,000 euros for 14 payments and which the Government plans to increase to 60% of the average wage next year.

In this area, there is good harmony between the two government forces and they have the complicity of the unions, but firm opposition from the employers is also expected. At the moment, on September 2, the commission of experts that advises the Government is convened, which last year set several ranges and in the highest it placed the minimum wage at 1,049 euros for 2023. Considerable increase that supposes the continuation of the increase that It has been followed since 2018, when it was at 735 euros. However, wild inflation relativizes it. It will mean a 4.9% increase over the current SMI, when average inflation this year is expected to be around 8%.

Given this, the second vice president and Minister of Labor, Yolanda Díaz, stated last week that "in the face of runaway inflation, impossible for the social majority, more than ever we must raise the minimum wage."

The advisory commission must update its numbers and specify what is 60% of the average salary, which is the reference set by the European Social Charter and that the Government promised to update in 2023. In July 2021, the experts set a SMI maximum of 1,049 euros, but that figure must be updated and inflation must be incorporated.

The experts will mark the starting signal to begin negotiations with the social partners, although the reactions seem very predictable. The consensus with the unions seems as close as the discrepancy with the employers. Something that already happened in the last negotiation, where the CEOE opposed the increase. The times of pandemic are long gone, when the crisis watered fertile ground in social agreements. The pressure on the president of the CEOE, Antonio Garamendi, who faces elections this fall, also influences. Since his support for labor reform, he has received multiple calls to end what some saw as a honeymoon with the government and harden his positions. Whether due to pressure, the proximity of the elections or conviction, in recent months a tougher Garamendi has been seen, and it does not seem that the SMI is the ground where he can give in at a time when companies are subject to an increase of costs due to inflation.

In any case, the Government's determination seems clear and, on this point, without internal dissent. Just in case, last week the Secretary of State for Employment, Joaquín Pérez Rey, took it upon himself to recall that the Government would comply with its program. “We will proceed to raise the salary for next year. This is a very successful policy and more necessary than ever to face the effects of inflation on those who suffer the worst, those who are receiving the most modest wages, ”he said.

Another issue that awaits the Minister of Labor is the status of the intern, with which she intends to radically change the practices of students in the world of work. Díaz had proposed to close it before the holidays, but it was not possible. In September she will return to the fray with a text that has, here too, the good disposition of the unions and a lot of reluctance from the employers. “For Labor, putting an end to one of the most damaging practices in the labor market, which is using students to fill jobs, false scholarships, is a priority. Just as it is a priority for training relationships to be channeled mainly through training contracts”, stated Pérez Rey. Work wants that, on the one hand, there is remuneration to cover the expenses of the students in practices, and on the other, that they are not used to cover jobs.

Another front for Díaz will be the Law of Institutional Participation, to regulate the entry of trade union and business organizations in the collegiate bodies with decision-making or control functions that act integrated in the General State Administration and in the socio-economic consultation tables. They are organizations such as the Economic and Social Council, the Higher Statistics Council or the tripartite consultative commission of the Labor Inspection. On the other hand, another planned law, that of including the representatives of the workers in the boards of directors of the companies, does not seem to find a place in this legislature.

Of course, it will also be time to discuss next year's budgets. After the Government approved a spending ceiling of 198,221 million for 2023, which represents a new record by exceeding this year's figure by 1.1%, now it is time to negotiate, both within the Government and with the parliamentary forces whose support will be needed.